Is your schooner sun-powered?

Fancy a refreshing drink over the holiday season but also keen to support businesses that will help us achieve a sustainable future? Check out where some of Australia's most popular beers rank when it comes to switching to 100% renewable energy. 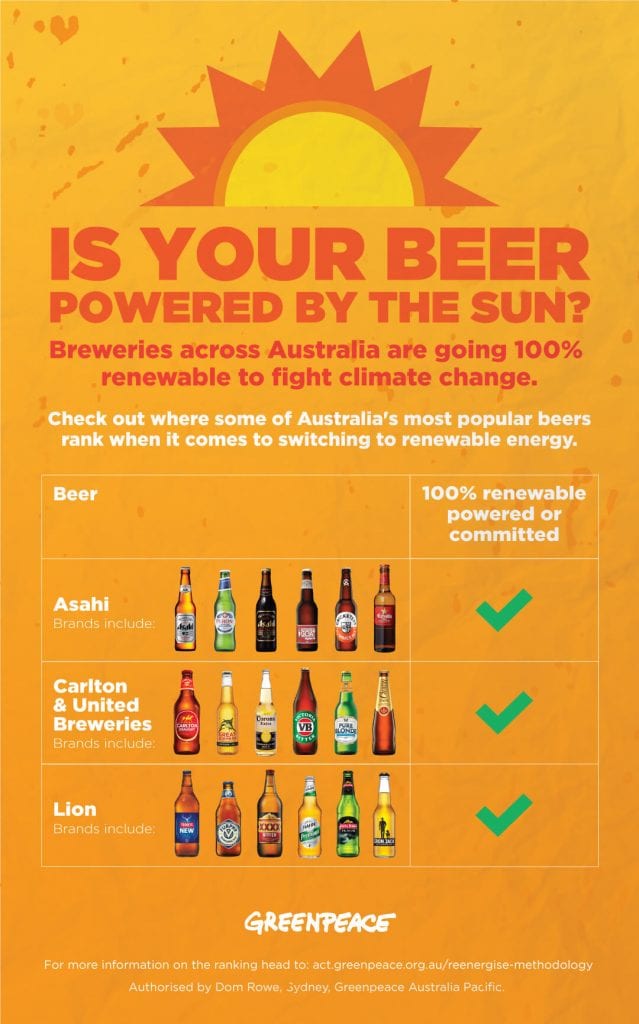 If you’re a fan of some of Australia’s biggest selling beers, chances are you’re likely enjoying a drink that is also good for the planet. Cheers!

One week after thousands of Greenpeace supporters took action and called on Australian companies to switch to renewable energy, major beer brewers Lion and Asahi have committed to power their operations with 100% renewable electricity, and plan to make the switch by 2025.

This means when you fill up your esky with beer this summer, you can feel good knowing your cold one will soon be brewed by the sun.

How are these companies switching to renewable energy?

The first is signing what’s known as a ‘power purchase agreement’. This is effectively a deal or contract with a large wind or solar farm in regional Australia, that provides the company with large amounts of clean electricity.

CUB has signed an agreement to purchase almost half the output of Karadoc solar farm in Mildura, Victoria, which officially opened in March 2019. This agreement covers more than 90% of the company’s total electricity needs.

Meanwhile, Lion has signed an agreement together with the Australian Hotels Association NSW to jointly purchase renewable electricity which will help support the construction of the Silverleaf Solar Farm in Narrabri in regional NSW. Excitingly this deal will also be helping smaller pubs and clubs across NSW go renewable too.

The second way these companies are making the switch is by installing solar systems on their manufacturing or brewing facilities. Asahi has installed a large solar system on its Huntingwood Brewery in Victoria. Lion has done the same on its XXXX Brewery in Brisbane and will do the same at its Little Creatures Brewery in Geelong in 2020. Carlton & United will be installing solar at its Yatala (Qld) and Abbotsford (Vic) breweries in early 2020.

Of course, these solar investments are on top of the all-important step of reducing their electricity consumption wherever they can.

What about the crafty brews?

If you’re a fan of craft beer, don’t worry – we haven’t forgotten about you! Craft beer breweries are doing some incredible things to make their beer better for the planet.

If you’d like to learn more – check out this blog on what craft breweries are doing across Australia to help the planet: The Rise of Green Microbrews

Why is this important?

The impacts of climate change, like extreme drought, unprecedented bushfires, and record-breaking heat waves, are affecting all Australians – from farmers to families, in our regions and our cities.

Rather than taking strong action on climate, our leaders have let Australian’s emissions grow.

So we’ve worked out a way to turn one of Australia’s biggest source of domestic carbon emissions into a source of renewable wind and solar energy.

Almost 70% of Australia’s electricity is consumed by business and industry every year, and most of this is still being generated by coal, a key driver of climate change. That’s why we’re calling on Australia’s biggest companies – like Woolies, Telstra and Coles – to publicly commit to switching to 100% renewable power.

We know that if enough big brands make the switch to 100% renewable energy, it will not only take huge amounts of dirty energy out of the grid, it will also kick-start many new solar and wind projects across Australia.

Already many companies and brands are making the switch. Companies like CUB, IKEA, Google and the big four banks are already committed to using 100% renewable energy through the global initiative RE100. This initiative has massive momentum with over 220 companies worldwide signing up to go renewable. Companies are making the switch because it’s cheaper, cleaner and more reliable. It’s better for business and it’s better for the climate.

But there are still many companies yet to make the same commitment. And as their customers and staff, we can publicly call on them to take responsibility for their contribution to the climate crisis.

Add your name and help tell major companies and brands it’s time to make the switch to renewable energy now.