Winning! Colgate to end its role in forest destruction

Nearly 400,000 of you have written to P&G’s CEO. Dozens of protests have taken place in cities as diverse as Jakarta, Cincinnati and London. And thousands have taken to Facebook, Twitter and even their phones to tell P&G to clean up their act...

… And while P&G might still be sourcing palm oil from forest destruction, your voice is still incredibly powerful. Today, one of the world’s biggest personal care companies, Colgate-Palmolive, has brushed up its act and promised to make its products free from forest destruction.Colgate’s new policy is very detailed. It goes beyond the weak sustainability standards P&G continues to rely on. Colgate’s policy mentions critical things like biodiversity, carbon stocks and soils. It stresses the importance of engaging with communities, mapping the palm oil Colgate buys all the way down to the plantations where it’s sourced. And it demands suppliers apply these principles to their entire operations, clearly stating that contracts will be canceled in case of non-compliance. The only weakness is that it has an unambitious timeline of 2020 – a point we’ll continue to push it on.

“P&G is committed to the sustainable sourcing of palm oil. By 2015, we intend to only purchase and use palm oil that we can confirm to have originated from responsible and sustainable sources.”

It goes on to say: “We encourage suppliers to adopt the Principles and Criteria of the RSPO for sustainable palm production.” 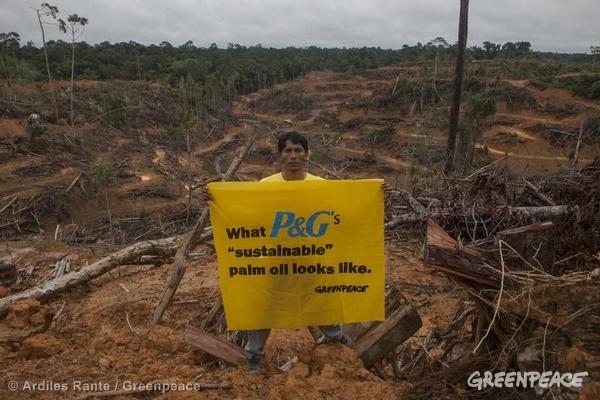 Essentially, P&G would like to imagine itself not contributing to deforestation, and maybe in the future it will be able to say it doesn’t… if it happens to work out that way.

With Colgate now joining the groundswell of companies committing to No Deforestation – including Nestlé, L’Oréal, Mars, Ferrero and Unilever – P&G is looking even more isolated.

P&G has no excuses.

It can’t continue to hide behind vague announcements, supporting initiatives that are proved not to yield solid results. Take action and tell P&G to follow Colgate’s lead!

Joao Talocchi is a forest campaigner at Greenpeace USA.