An advisory opinion by the International Court of Justice can clarify how existing international laws can be applied to strengthen action on climate change, protect people and the environment and save the Paris Agreement. 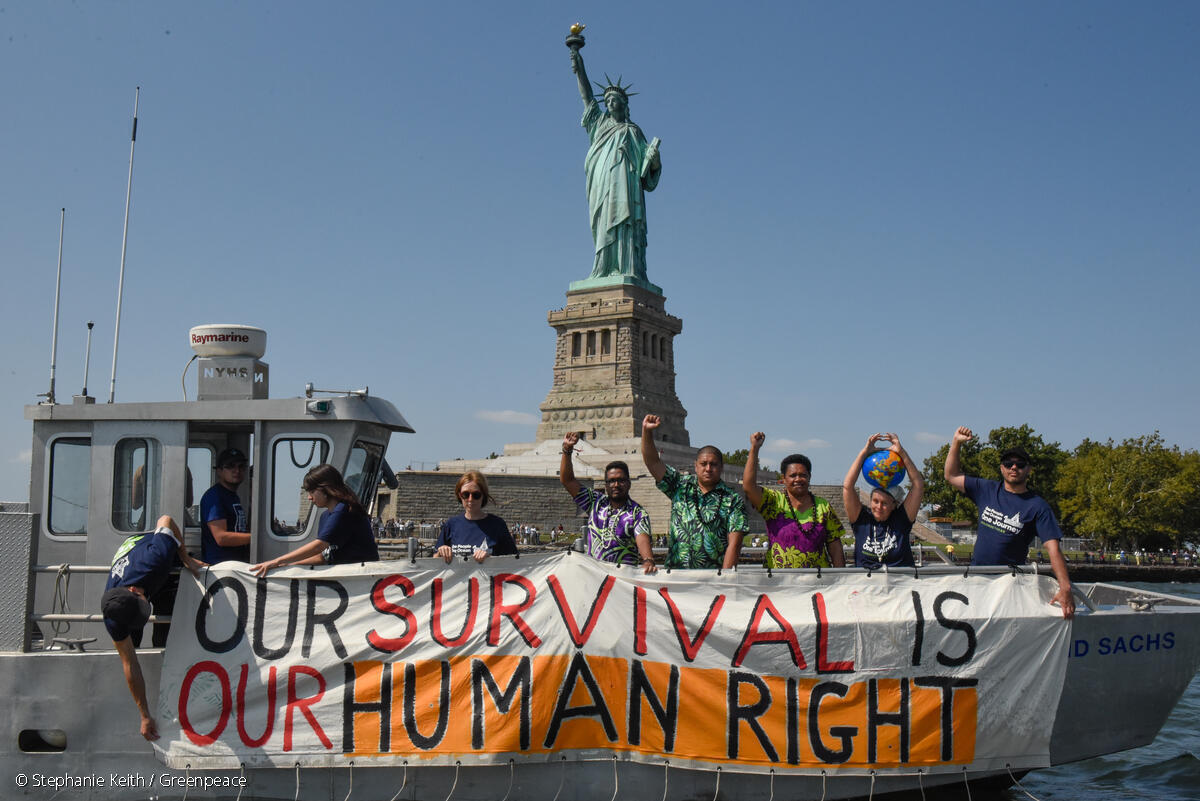 Wow, what a journey we have been on with our Pacific Island activist team. After months of training around the Pacific and mobilisations across 12 countries (and on our very own Rainbow Warrior ship), our rockstar GPAP team joined youth and Indigenous activists for an action in New York to encourage world leaders to #VoteYes for climate justice at the UN General Assembly.

What this trip revealed is that no matter how much planning you undertake, there are always issues you cannot anticipate.

In the hours leading up to the long flight from Fiji to the USA, we met our first challenge.

Whilst on his way to the airport, one of our youth activists was involved in a bus accident just 10 minutes outside of Nadi Town. Fortunately he has since been discharged and is steadily recovering at home however it meant that he was unable to continue his journey to the UN General Assembly. Although this was a huge blow to the team, Fane and Broderick reluctantly said their goodbyes and boarded the next flight to New York a few hours later.

After some much needed rest, from travelling 10 hours across the globe, Fane and Broderick joined our energetic Volunteer Coordinator, Shiva (who had travelled to New York a few days prior) for a briefing with the Pacific Island Students Fighting Climate Change and other activists on the actions for the week.

It’s worth noting that this journey started in 2019 when a group of law students from around the Pacific Region, first made a presentation on climate change and the impacts on human rights. It has, since then, prompted more than 1500 civil society organisations and several Governments to join hands with the Vanuatu government in its quest to “clarify the obligations states have under international law to protect the rights of the present and future generations against the adverse impacts of climate change” through a legal opinion from the International Court of Justice.

After a full day of banner preparations and sewing, our team set off at 6am the next day for a Flotilla Action.

Our team were honoured to be welcomed to Country/Land by Owl and Mukaro, who are First Nations elders from Ramapo Munsee Lanape Nation and Taino Tribal Nation, along with volunteers from other cultural backgrounds who joined in solidarity with, and for, the Pacific’s call for climate justice.

First, we sailed down Newton Creek, as an homage to the climate justice fight that New Yorkers have been fighting for decades. More commonly known as the Greenpoint oil spill, it was here that in 1979, an estimated 17 to 30 million gallons of petroleum spilled in the area over 140 years. 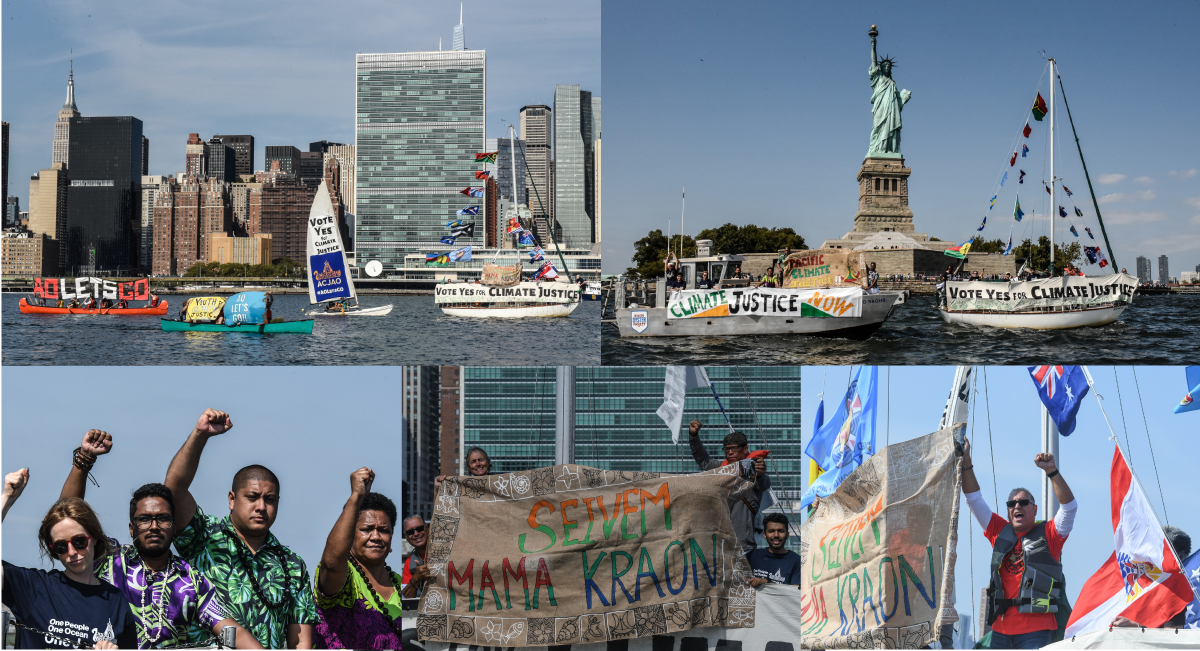 As we sailed down the New York East River towards the UN Headquarters for the second part of the flotilla action, we honoured our ancestors, people and lands with our Pacific chants, songs and dances and called on world leaders to uphold climate pledges made in Rio de Janeiro, Kyoto and Paris.

Vinaka vakalevu and tagio tumas to our coordinator Monica who ensured that our Pacific and first nations people were able to board the larger boats in order to proceed to the Statue of Liberty for the last action of the day.

The next day, we joined a Climate March with “Fridays for Future” where approximately 2000 young activists from around the world joined hands to call on world leaders and demand climate justice. Broderick took charge and led the chanting and music for the Pacific and ACJAO.

It was an emotional experience for our Pacific and First Nations activists, knowing that, in that moment, our struggle for the survival of future generations had reached the hearts and minds of so many across the globe.

As Broderick and Fane travelled back to Fiji, Varanisese, who was part of our Pacific training program, joined the 350 Youth activists in Tunisia for the The Climate Justice Camp. The week-long camp was attended by over 400 youth climate representatives from over 65 countries around the global south and focused on building intersectional solidarity and developing pathways towards long-term political and systemic change around climate adaptation, justice, access to energy, and loss and damage associated with the disproportionate impacts of the climate crisis.

Although it’s still unclear when exactly a vote will take place, this journey to New York and Tunisia was critical in  ensuring that Pacific and frontline communities are visible and that our voices are heard.

We will continue on this journey and ask everyone to join our Pacific vaka (canoe) in pursuit of climate justice.