Demanding Climate Justice for the Pacific

Taking the world’s biggest issue to the world’s highest court - the International Court of Justice! 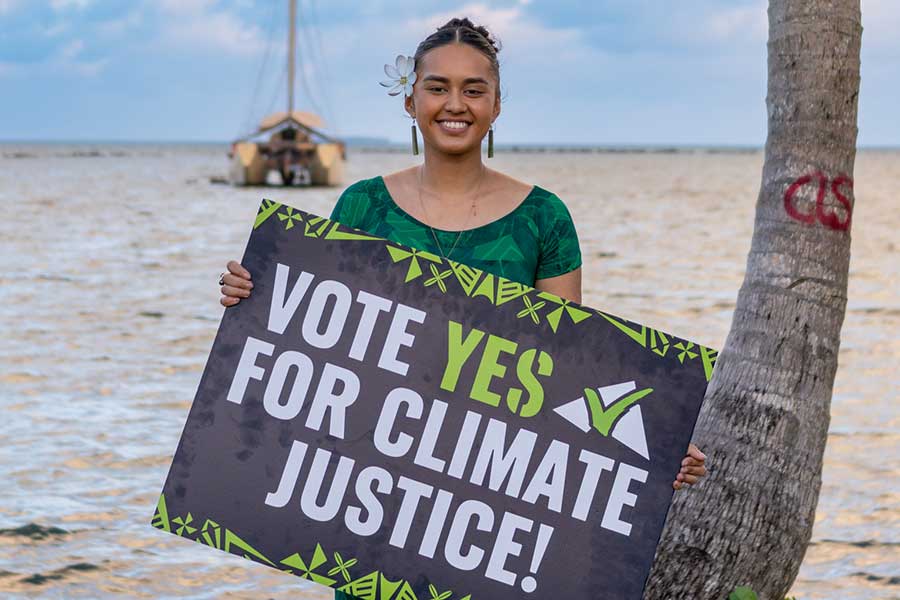 This week Pacific leaders converged on Suva in Fiji for the Pacific Island Forum (PIF), and they arrived to a chorus of youth and civil society led actions and mobilisations demanding climate justice for the Pacific!

High on the agenda was the Pacific Island youth led campaign for the world’s first advisory opinion from the International Court of Justice on the impacts of climate change on human rights.

In an exciting and historic development, Leaders from the region (including Australia and New Zealand) have expressed their support for an advisory opinion on climate change from the International Court of Justice.

This endorsement is a significant step of united regional support for the ICJAO and we invite people from around the world to join our “vaka” as we sail towards the UN General assembly in September.

Watch this video to understand some of the impacts of climate change on communities in Fiji.

As part of the ICJAO official Alliance, led by the Pacific Islands Students Fighting for Climate Change, Greenpeace Australia Pacific have run training sessions to skill-up and activate young climate champions in Fiji and Vanuatu.

At a powerful 2 day training session in Fiji which included Pacific prayers, story-telling, traditional tapa/masi art and banner making, Siva Afi dance, talanoa, PIF action planning, campaign outline and updates and messaging. All the sessions during the two day training were rooted in cultural connection and Pacific strength and unity. The Vanuatu training is being delivered this week in Port Vila, Vanuatu. The art and banners created were used in our PIF action (below), and will embark on a voyage across oceans to the UN General Assembly and COP27.

Watch this video to experience the behind the scenes and indulge in the training atmosphere with our absolutely amazing and talented campaigner Sina Suliano. 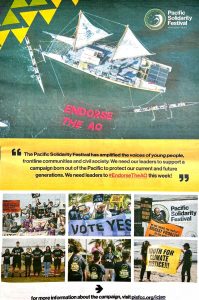 We are one people, one ocean, on one journey! That was the Pacific’s message to the world when we gathered with students, climate activists, and civil society from across the region at the University of the South Pacific for our on the water action.

We coordinated boats, canoes, and SUPs along the coastline to reveal an over-water banner, with a chain of participants onshore and in the water joining with banners and chants calling on leaders to support the ICJ Advisory Opinion.

This is just the beginning of the Journey and we will continue to work with our Alliance partners to take the Advisory Opinion to the world!

After that, it’s time to take this unity global! With your help we must win the hearts and minds of people and leaders across the world in order to secure a simple majority of votes at the UN General Assembly to achieve this crucial legal opinion which could:

(1) Cement consensus on the science behind climate change

(2) Lead to more ambitious action under the Paris Agreement

(4) Provide a baseline for state action

We wanted to share with you a snapshot of the on-the-ground mobilisations that Greenpeace Australia Pacific has supported and which have helped to pave the way for this important step towards the Pacific’s journey towards climate justice!

The ICJAO campaign is building and capturing the hearts and minds of people across the globe. Media interest in the campaign has escalated rapidly and we have been on the ground in Suva training up incredible youth spokespeople from the region and coordinating media and messaging. Here’s a sample of just some of the coverage coming out of the region this week:

In parallel to the ICJAO media and mobilization efforts, our team has begun to gather compelling stories, photos and videos from across the Pacific Islands that document the short and long term impacts of climate changes on human rights.

It is our hope that we may in future enact the support of the Rainbow Warrior to weave together stories from other Pacific Island communities to share with the world the unique threats to culture that are being faced, but also the need for collective response on the journey towards climate justice.

Thanks for helping us to get this campaign to where it is!

Sepesa, Sina, Kiti, Shiva, Steph, Maddison and the rest of the Pacific team

Looking for more ways to help?

You can support our campaign for Pacific Climate Justice