She’s the first ship in our fleet designed and built specifically for Greenpeace. That means the Rainbow Warrior is not just one of the most environmentally-friendly ships ever made; she’s also a campaigner’s dream. We are thrilled she’s now fighting with us for a green and peaceful future. 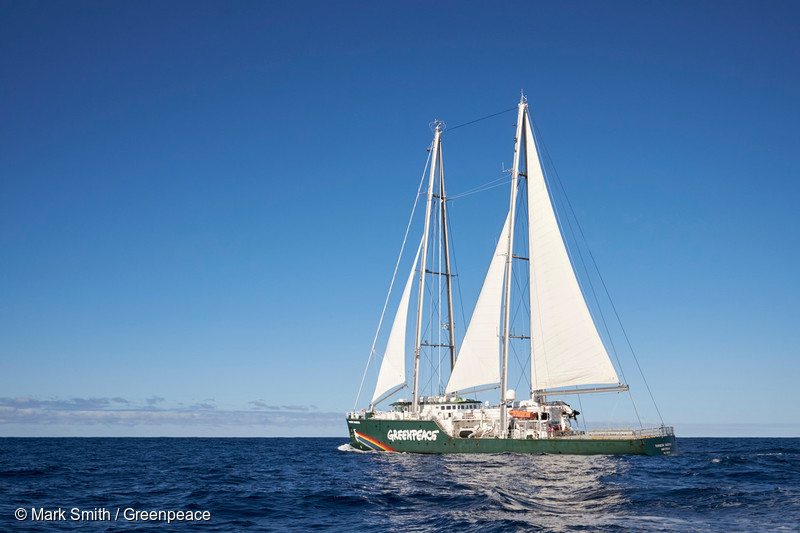 After 22 tireless years at the campaigning frontline, the second Rainbow Warrior retired from her Greenpeace life on 16 August 2011.

The ship – which replaced the original Rainbow Warrior after it was bombed in 1985 – helped end nuclear testing in the Pacific, blocked coal ports and closed down destructive fishing operations (to name but a few).

It’s a very proud legacy – and the third Rainbow Warrior, which entered operation on 14 October 2011, is better equipped to carry it on than any Greenpeace ship before her.

Ever since the first Greenpeace expedition set off in a ramshackle old fishing vessel we have relied on existing vessels refitted to meet our needs. With the new Rainbow Warrior, we had the chance to start with a blank canvas for the first time.

A fast and reliable vessel
The new Rainbow Warrior is as fast as many industrial vessels, with action boats that can be deployed in minutes – even in waves up to 3.5 metres high. Her helicopter landing pad means we can deploy a vital eye in the sky, enabling us to spot illegal fishing operations and shipments of illegal wood.

A base for science
The ship can carry specialised equipment up to 8 tonnes in weight. It’s designed so that scientists can work on board. By supporting original scientific research we help build understanding of what is happening to our planet’s ecosystems.

A floating communications hub
The on-board satellite communications system – featuring a built-in satellite uplink – means the new Rainbow Warrior is able to stream live footage from the scene of environmental crimes direct to the world’s media.

We wanted the third Rainbow Warrior to be as environmentally-friendly as possible for a ship of its type and Greenpeace has worked with some excellent engineers to make it happen.

The ship sails primarily under wind power. Its 55m-high A-Frame mast system can carry far more sail than a conventional mast of the same size. This is the first time this design has been installed on a vessel of the Rainbow Warrior’s size.

The Warrior does have electric drive engines to help out when the weather isn’t suitable, but these are also built with sustainability in mind.

On board up to 59 cubic meters of grey and black water can be stored, avoiding any need for at sea disposal. And a special biological filtering system helps clean and recycle grey water.

The new Rainbow Warrior’s eco-credentials include:

The making of a Warrior

The construction of the ship was a (welcome) challenge for everyone involved – the experts were not only constructing a high-tech ship; it also had to meet the highest environmental standards.

The shipyard in Gdansk, Poland, started work on the hull in the summer of 2010. 340-tonnes of steel were then transported to the Fassmer Shipyard near Bremen, Germany, where the ship was fitted out.

Here, the hull’s rusty brown also gave way to a much more suitable colour – the Greenpeace green. A dove of peace and the striking colours of the rainbow finally made the new ship our Rainbow Warrior.

She entered water for the first time in July 2011 and was officially launched in Hamburg, Germany, in October the same year.

A beacon of hope

All Greenpeace ships are special, but our new Rainbow Warrior is one of a kind. She plays a key role in our campaigns, allowing us to bear witness and take action to prevent environmental crimes around the world.

“Since setting sail in 1978 the Rainbow Warrior has been on the frontline of the struggle against environmental abuse,” Kumi Naidoo, Greenpeace International’s Executive Director, said at the keel laying ceremony, which took place on 10 July 2010 – the 25th anniversary of the bombing of the original Rainbow Warrior.

“She is an icon of non-violent direct action and a beacon of hope for millions of people around the world.”