What is sustainable tuna?

It can be confusing to know if you’re making the right choices when deciding what to buy. The terms ‘sustainable’, ‘green’, and ‘environmentally friendly’ are common phrases that brands use to market their products, and they can often be misleading for consumers. 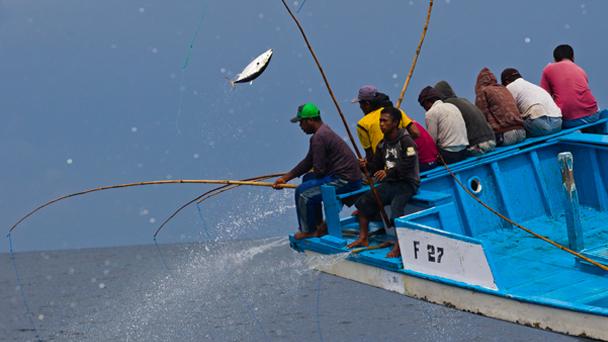 Greenpeace supports any organisation making genuine commitments to improve their environmental performance. But it is important to be able to see through the greenwash in any industry, including the canned tuna industry.

It’s encouraging to see ever-increasing demands for products or services that don’t come with environmental consequences. Since we launched our first Canned Tuna Guide in 2009, thousands of Australians have written to tuna companies demanding they switch to sustainably caught tuna. And they’re listening. In 2017, we had a huge breakthrough which ended destructive fishing practises in the Australian tuna market. Thanks to the efforts of our amazing supporters, all major Australian canned tuna brands are now FAD-free!

How can I tell if my tuna is sustainable?

For a particular seafood to be sustainable it needs to at least meet these two requirements:

As the UN Food and Agriculture’s code of conduct for responsible fisheries states; “management should promote the maintenance of the quality, diversity and availability of fishery resources in sufficient quantities for present and future generations” to benefit from. A sustainable fishery operates in a socially and economically fair manner.

One of the most prevalent forms of tuna fishing is the use of fish aggregation devices (FADs) with purse seine nets. Greenpeace, other conservation organisations, sustainable fishers and marine scientists are opposed to this form of fishing for the following reasons:

Can FADs be sustainable?

Parts of the industry are reported to be engaged with researching and developing new FAD designs and technologies to try and mitigate the impacts of FADs in purse seine fisheries. Greenpeace  welcomes research into improving the environmental performance of the fishing industry but, so far, sustainable FADs don’t exist.

The use of FADs is increasing, as are their consequences. Tuna brands must commit now to ending practices which have an unsustainable impact on the marine environment and make the switch to proven, lower-impact forms of fishing. If companies don’t make the clear commitment to ban FADs, nothing changes at sea. Possible but unavailable technologies and research are not an excuse for inaction when proven alternatives are available now.

The most sustainable method of catching tuna, when operated according to best practice, is the pole and line method. Each fish is individually caught so it limits the impact on tuna stocks and it’s rare that other species such as turtles or sharks are accidentally caught. Pole and line fishing is also good for local communities because it brings employment opportunities to coastal regions such as our Pacific Island neighbours. The Pacific was once home to a thriving, locally-owned pole and line tuna fishery but more efficient, foreign purse seine fleets eventually drove them out.

A few years ago, no Australian tuna brands sold pole and line caught tuna. Today there are a number of pole and line options available at Australian supermarkets thanks to consumer pressure. This includes Safcol, whose entire range is now caught using pole and line.

Is aquaculture a solution to overfishing?

Aquaculture or fish farming involves farming saltwater species in land-based tanks and ponds, in sea-based cages or nets, or on other similar structures. It has expanded dramatically and is often promoted as a solution to sustainable fisheries. Unfortunately, with the exception of some fish that are herbivores, most aquaculture exacerbates the problem of overfishing and is not sustainable.

The main reason is because it doesn’t remove the problem of overfishing, it relocates it down the food chain. Wild fish need to be caught to feed the farmed fish. For example, it takes about 3 tonnes of wild fish to produce 1 tonne of salmon. By fishing this “feed” or smaller fish at industrial levels, simply creates a problem further down the food chain. It can then have even greater problems for ecosystems as other fish species that also feed on these fish species are affected.

All the tuna we eat is caught here in our region; most of it from the Pacific ocean. So, every can of tuna that you buy that was caught using sustainable fishing methods, or harvesting a species not-at-risk, is doing a favour for coastal fishers right here in Australia and our neighbours in the Pacific.

So what should I buy?

It’s simple, look for ‘pole and line’ or ‘FAD-free’ canned tuna products and you will be making the right choice for our oceans. Choose skipjack or albacore over yellowfin tuna. Make sure the tuna you buy clearly has the species name, where it was caught, with the fishing method used written clearly on the label. Thankfully, you can now find a great variety of these products in every supermarket in Australia. And if in doubt, refer to the 2017 Greenpeace Canned Tuna Guide!