SHARM EL-SHEIKH, 6 November 2022 - Australia’s move to back loss and damage talks at COP27 is a step in the right direction, but must be followed by full-throated support for the establishment of a loss and damage finance facility if it wants to walk the talk on its COP31 bid with the Pacific, Greenpeace Australia Pacific says. 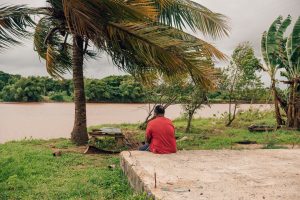 Australia’s Minister for the Pacific Pat Conroy, who is in Egypt to meet with Pacific Island leaders about plans to co-host the COP climate summit in 2026, today revealed that Australia supported putting loss and damage on the official COP27 agenda.

Shiva Gounden, Pacific advisor at Greenpeace Australia Pacific, welcomed Australia’s support of loss and damage as a COP27 agenda item, but said the time for talk is over.

“The time for talking shops is over if Australia wants to strengthen its Pacific family and earn a COP with Pacific nations in 2026.

“The Australian government has made a first step in meeting the moment on the urgent and critical issue of loss and damage, but it must back this up by walking the talk and moving the issue beyond mere discussions at COP27.

“We can no longer kick the can down the road on loss and damage funding to compensate countries suffering the worst climate impacts but contributing the least to the climate crisis.

“Loss and damage is not an abstraction, it is a manifestation of the climate injustice faced by Pacific Island nations.

“Australia must act in good faith for its Pacific neighbours on the frontline of the climate crisis by moving beyond loss and damage talks, and supporting the establishment of a dedicated loss and damage finance facility at COP27.

“It’s time for the Australian government to step up and walk the talk on loss and damage at COP27. This climate compensation is no longer simply important, urgent, and necessary. It is critical, immediate, and fundamental to the survival of Pacific Island nations.”

The European Parliament has already passed a resolution calling for the establishment of a loss and damage finance facility at COP27.