NEW YORK CITY, 17 September 2022 - Pacific activists and students, joined by New York climate activists and Indigenous representatives, held a climate justice flotilla on Saturday sailing past the UN HQ and the Statue of Liberty with banners calling on countries to vote yes to the Vanuatu-led bid for an International Court of Justice (ICJ) advisory opinion on climate change at the UN General Assembly (UNGA). 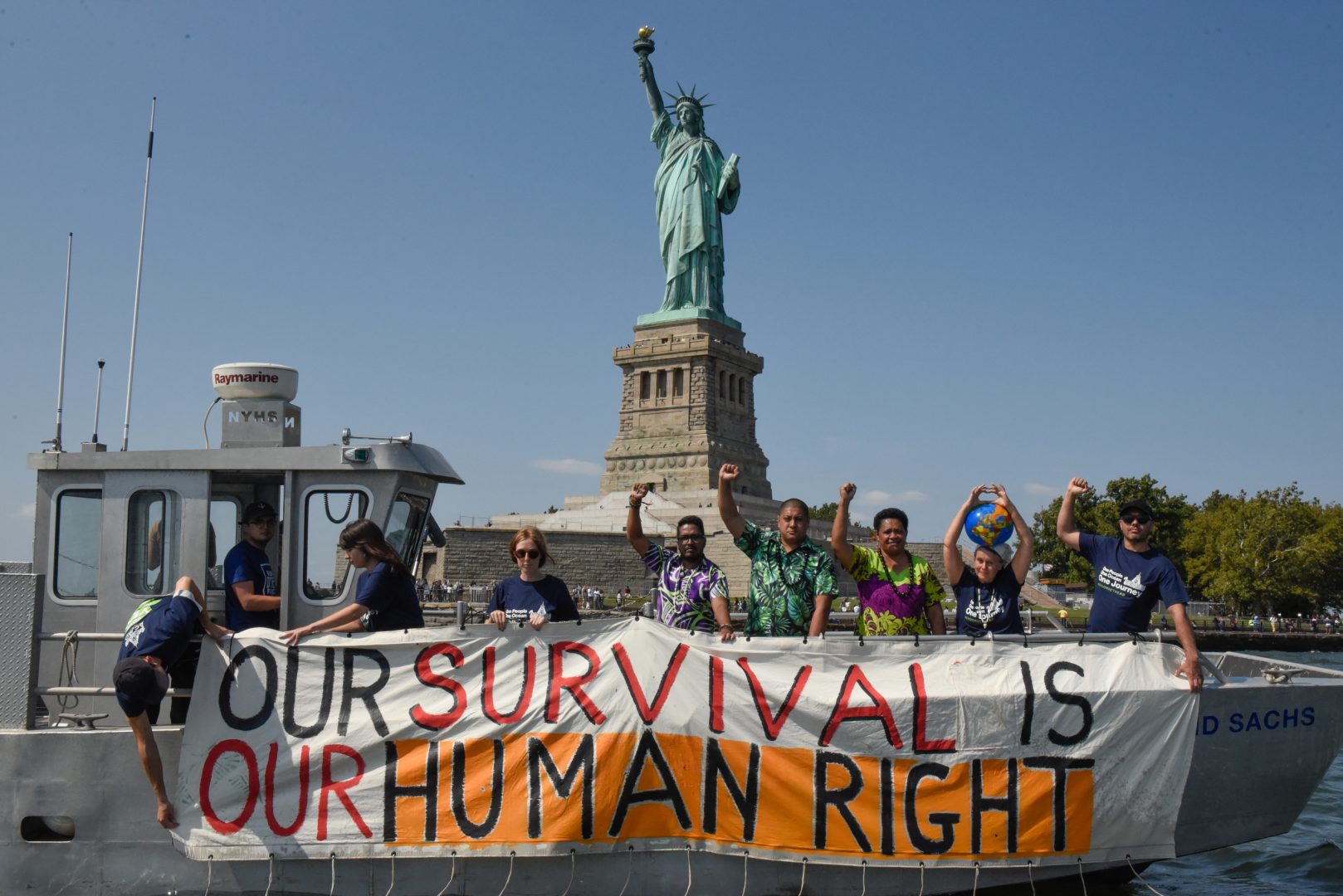 An alliance of activists and organisations, including Pacific Islands Students Fighting Climate Change (PISFCC), Greenpeace Australia Pacific, and Amnesty International are in New York as the UNGA opens and New York Climate Week takes place to lobby global leaders to support their campaign for climate justice.

First devised in a South Pacific university classroom in 2019, the campaign now led by the Vanuatu government is seeking an advisory opinion from the ICJ, the world’s highest court, which would investigate how climate change is affecting the human rights of people and create legal clarity on how to address it. The matter will be put to the UNGA for a vote before it can be referred to the ICJ.

The action saw several boats travel along the East and Hudson rivers, stopping outside UN HQ and under the Statue of Liberty, unfurling an over-water banner, with chants calling on leaders to support the ICJ advisory opinion and climate justice by voting yes at the UNGA.

The voyage represents the Pacific concept of the vaka (traditional canoe), taking the campaign directly from the Pacific to the United Nations.

“Climate change is causing a human rights crisis. Hundreds of millions of people in vulnerable countries such as ours are having their peoples, livelihoods, health, food, water, and cultures severely impacted.

“We need monumental, global action, and we need it now. An advisory opinion from the International Court of Justice is exactly that. It would mean we could better enforce the Paris Climate Agreement, and ensure human rights are at the fore of all climate responses.

“Our voyage has taken us from a classroom, to the UN HQ and the Statue of Liberty, with support from nations around the world. This is an idea whose time has come and we call on every world leader to step up and support it.”

“The actions of the students and activists in New York are both inspiring, and a necessary wake up call for leaders and representatives arriving at the UN General Assembly. Pacific youth have experienced untold devastation, and know the worst is yet to come. Yet despite this, they are not looking to assign blame or create division. Instead, they are simply looking to protect the world’s most vulnerable, for all of humanity, and our collective future.

“Leaders should heed this message, and translate it to action. An ICJ advisory opinion will have real global impact, including cementing consensus on the scientific evidence of climate change, compelling more ambitious action under the Paris Agreement, and integrating human rights law and environmental law.

“Voting yes to the ICJ advisory opinion resolution at the UN General Assembly is a simple act, but an incredibly powerful one. With a single vote, states can help ensure Pacific Island nations have a greater voice on the international stage, and provide a legal framework for countries around the globe.”

For interview requests or more information, contact Maddison Bates-Willis on 0401 244 296 or [email protected]