SYDNEY, May 20 2022 - Telco giant Optus has today become the final major Australian telco to commit to switch to 100% renewable electricity by 2025, putting the telecommunications industry back out in front of the corporate energy transition according to a new industry briefing by Greenpeace Australia Pacific. 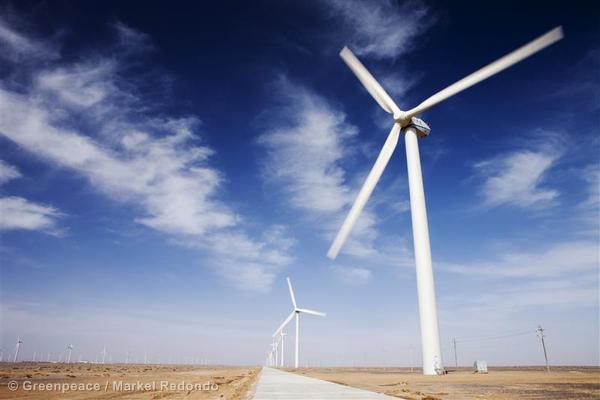 Wind turbines in Zhong Guanghe Wind Farm. China has set a target for renewable energy consumption of 15 percent of the market by the year 2020. According to the Greenpeace Energy Revolution Report, the 15 percent should rise to 40 percent by the year 2050.

Optus is the 38th largest electricity user in Australia, using 539GWh of electricity a year – the equivalent of more than 85,000 homes, or nearly all the homes in Hobart. It’s announced that under a new climate action plan, 100% of its electricity requirements will be backed by renewable energy sources by 2025.

Greenpeace’s research reveals that telecommunications and data centres are some of Australia’s biggest electricity users, streaming through a vast 3,913 GWh of electricity annually – as much as 630,000 Australian homes combined. The sector has been one of the fastest-growing sources of greenhouse gas emissions, creating nearly 3.1 million tonnes of climate pollution.

REenergise campaign director Lindsay Soutar from Greenpeace Australia Pacific said that today’s clean commitment by Optus should get the telecommunications sector back on the renewable energy track.

“After years of pressure on the telco sector from Greenpeace and the community, we’re pleased that Optus has today said yes to renewable electricity. Now Optus is dialling in to clean power, all major Australian telcos will be powered by the wind and sun by 2025. The telco sector is now streaming to the front in Australia’s renewable race” she said.

“We’ve been working with Australia’s biggest energy-using companies, from supermarket giants Coles and Woolworths through to Bunnings and Kmart, to accelerate their shift to renewables and make firm commitments to make the switch within the next few years.”

“The appetite for renewable change amongst Australia’s top brands has been huge, with over 40 major companies now committed to power their business with renewable electricity by 2025. These companies together represent almost 12% of corporate and industrial energy use in Australia’s National Electricity Market.

“At a time when both major political parties fall short on their climate policies, we are pleased to see Australian businesses step up. This sends a strong message that while Scott Morrison and the federal government may continue to drag their feet, Australian businesses and consumers want to see the country powered by cleaner, cheaper renewable energy,” she said.


Greenpeace Australia Pacific is calling on Optus and all major telco and tech companies to sign up to the global RE100 initiative.