Prime Minister Scott Morrison today announced that he plans to waste $40 million of public money on carbon capture and storage for Woodside’s Burrup Hub gas project, which Greenpeace Australia Pacific has slammed as dangerous and ineffective.

Morrison announced the $40 million for Woodside, part of a nationwide $250 million to be spent on carbon capture measures, at a press conference in Perth today.

“The Morrison Government is essentially giving Woodside a license to pollute, handing taxpayer’s money to a company with billions of dollars of revenue to waste on ineffective, unproven and costly carbon capture technology,” she said.

“Carbon capture has never worked anywhere in the world at scale, with the most salient example of its failure being found right here in Western Australia. Chevron’s colossal Gorgon gas plant, Australia’s only commercial-scale carbon capture and storage project, has comprehensively failed – and now the Morrison Government wants to hand over more public money to waste on this dangerous fantasy technology.”

“Woodside’s Burrup Hub, if it goes ahead, is set to be the most climate-polluting project in Australia. Tacking a useless carbon capture facility to the Burrup Hub is applying the world’s smallest fig leaf to this fossil fuel monstrosity, leaving Woodside free to destroy our climate.”

“With renewable solutions like wind, solar and batteries offering boundless opportunities for Western Australia, the Federal Government should be investing in long term energy and employment solutions for our state, rather than funding technology designed to prolong the life of polluting fossil fuel projects.” 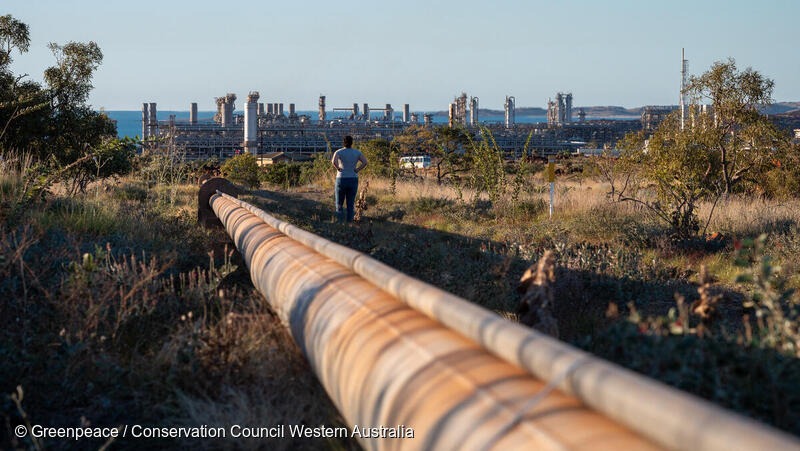 Woodside’s gas pipelines in the Burrup hub region. Woodside Petroleum is planning to drill for gas in what would be the most climate polluting project Australia has ever had.