Labor leader Anthony Albanese’s commitment of $194 million to tackle climate impacts on the Great Barrier Reef has been welcomed by Greenpeace Australia Pacific as important recognition of the damage climate change is wreaking on our fragile marine environment, but must be accompanied by an urgent commitment to emissions reduction.

Labor has announced an additional $194 million over four years to protect the Great Barrier Reef from climate change if it wins government at the upcoming election.

Kate Smolski, Program Director of Greenpeace Australia Pacific, said that protecting the Reef from worsening climate change must be a priority for any party that forms the next government.

“For too long the devastating impact of climate damage on the Great Barrier Reef has been pushed aside, putting one of the world’s greatest natural wonders and the thousands of tourism jobs that depend on it at risk,” she said.

“Federal funding to safeguard the Reef from climate change is urgently needed, as sadly shown by the news this week that ninety percent of the Reef has suffered coral bleaching. While Labor’s $194 million commitment is a welcome sea-change, protecting the Great Barrier Reef must take urgent priority for the next government, whatever its make up.”

“But protecting the Reef is more than just throwing buckets of cash at it. Climate damage to the Reef is fuelled by coal, oil and gas. In order to give our coral reefs a fighting chance at survival the next government must commit to slashing greenhouse gas emissions by at least seventy-five percent by 2030.” 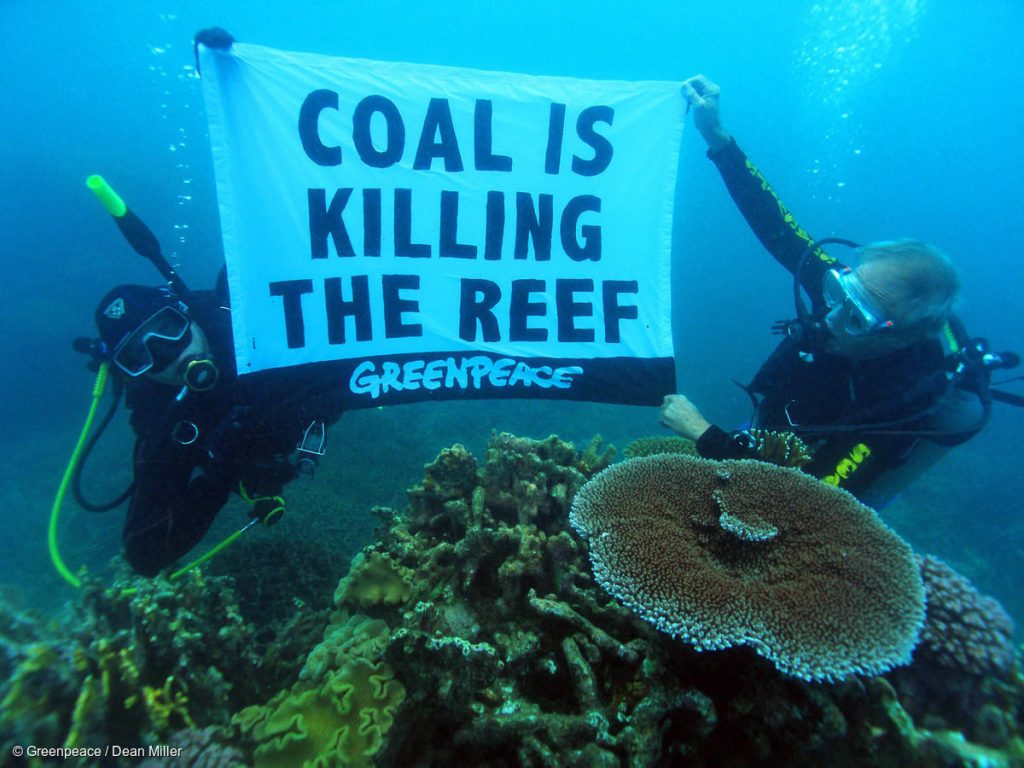 Great Barrier Reef, Tuesday 22 July 2008: Renowned coral scientist Dr John ‘Charlie’ Veron issued a dire warning about the fate of the Great Barrier Reef today when he joined Greenpeace divers in an underwater protest. Dr Veron and members of the Esperanza crew this morning dived the Great Barrier Reef with three banners reading: ‘KEEP THE REEF GREAT’, ‘NO FUTURE IN SHALE OIL’ AND ‘COAL IS KILLING THE REEF’.
(c) Greenpeace/Dean Miller 2008 NOT FOR ARCHIVE OR RESALE

Climate change has been identified as the number one threat to the Great Barrier Reef. Earlier this year, the Intergovernmental Panel on Climate Change’s Working Group II report warned that coral reefs, like the Great Barrier Reef, are already at their adaptation limits and will not be able to withstand further pressure like rising ocean temperatures caused by burning fossil fuels.