One year ago, I was glued to the television in my home in Fiji, watching with horror as Australia burned in last summer’s catastrophic bushfires. I’ll never forget the images of the iconic Sydney Harbour Bridge wreathed in smoke, or the bravery of the people in bushfire-threatened communities as they faced down the flames. 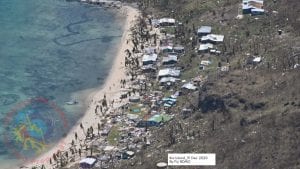 Now my country, Fiji, has just faced a similar climate catastrophe. Cyclone Yasa, a category 4 cyclone, wreaked damage on our island and across the Pacific last week. Cleaning up the wreckage from the storm will take months. The damage from Yasa is still being calculated, but so far it’s caused at least four deaths and is estimated to have inflicted damage worth hundreds of millions of dollars and made thousands of people homeless.

In the Pacific, we felt an intense empathy for the suffering of Australians during the bushfires. Like Australia, we too are on the frontline of climate change, and are already experiencing extreme climate-driven weather impacts.

Just as Australian families have their fire plans, checked and updated at the start of each fire season, we in the Pacific have household storm plans.

As Cyclone Yasa approached, families across Fiji battened down, preparing their homes, checking on loved ones and neighbours, herding frightened and confused animals to a place of safety. Everyone knows what to do to prepare for the destructive fury of a cyclone, and it’s something we now have to do with frightening regularity.

Climate change, which is mainly driven by burning coal and gas, is making supercharged storms like Cyclone Yasa more intense and frequent, and the Pacific Islands are bearing the brunt. Unless urgent action is taken to tackle climate change, for us it’s only going to get worse.

Cyclone Yasa was the second major storm to hit Fiji this year, following Cyclone Harold in April. That storm killed 27 people across the Pacific and destroyed 917 homes, with a further 2629 severely damaged. 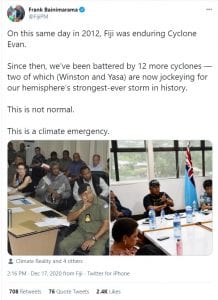 Destruction rides the winds of these storms, devastating our communities, destroying farmland and threatening our food security and putting our tourism industry, enjoyed by so many Australians, at serious risk.

We have stood strong for so many years now, but I don’t know how much more we can take.

Pacific economies were devastated by the loss of tourism during Covid-19, despite having almost no cases in the region. Now we’re being lashed by cyclones supercharged by climate change, which we have had almost no part in causing.

Pacific Islands are amongst the lowest-emitting countries in the world when it comes to greenhouse gas pollution. Compared to Australia, which has the highest greenhouse gas emissions per capita in the world, and is one of the world’s major coal and gas exporters, we’re small fry.

But we know what’s at stake here in Fiji, and we’re already moving towards net-zero emissions. Now Australia must do the same.

As a Fijian, I appeal to Australians – as our friends, neighbours, fellows on the frontline of climate change, you must step up and take a leading role in reducing emissions and halting climate damage.

In this region we’re in this together, facing down the worst that climate change has to throw at us, from catastrophic bushfires through to extreme cyclones.

We can work together to build a better, safer shared future. But for now, I bunker down and wait for the next storm.