Australia out of step with IPCC call to end fossil fuels

The Intergovernmental Panel on Climate Change (IPCC) Working Group 3 report, released today, shows the pathway towards a cleaner, safer and cheaper world - but Australia must commit to a very swift exit from fossil fuels to realise it, says Greenpeace Australia Pacific.

The IPCC report focuses on climate solutions, finding that renewable energy backed by batteries is the cheapest pathway for the world to tackle climate change. However, current government policies, including Australia’s, are setting the world up for climate disaster. The Australian Government was uncovered late last year attempting to water down the findings of the IPCC Working Group 3 report, notably around the need for urgent phase-out of fossil fuels.

The IPCC report emphasises that without early retirements, or reductions in use, current fossil infrastructure will emit more greenhouse gases than is compatible with limiting warming to 1.5°C. New fossil fuel developments, like Woodside’s planned Scarborough gas mine, will lock the world in to a high emissions scenario that will drive dangerous climate change.

Jess Paneygyres, Head of Clean Transitions at Greenpeace Australia Pacific, said that the IPCC report makes it clear that there is no scope for further polluting Australian gas developments.

“There is one bit of good news in this report, which is that the solutions exist to get us on the safest path – but we need to act now. Solutions exist for at least halving global emissions by 2030. And some options, like solar, wind and batteries, will actually be cheaper than alternative sources of power because their cost has fallen quickly and continuously over the last decade” she said.

“The safest path sees gas use decline worldwide by 85% by 2050. That means now is the time to start planning Australia’s transition away from gas and into clean alternatives.”

“This report also underlines that opening up new fossil fuel basins will lock us into the worst climate scenarios. There is simply no room for new coal, gas or oil. New gas projects in Australia, like Woodside’s Burrup Hub project, are incompatible with Paris Agreement aligned scenarios.” 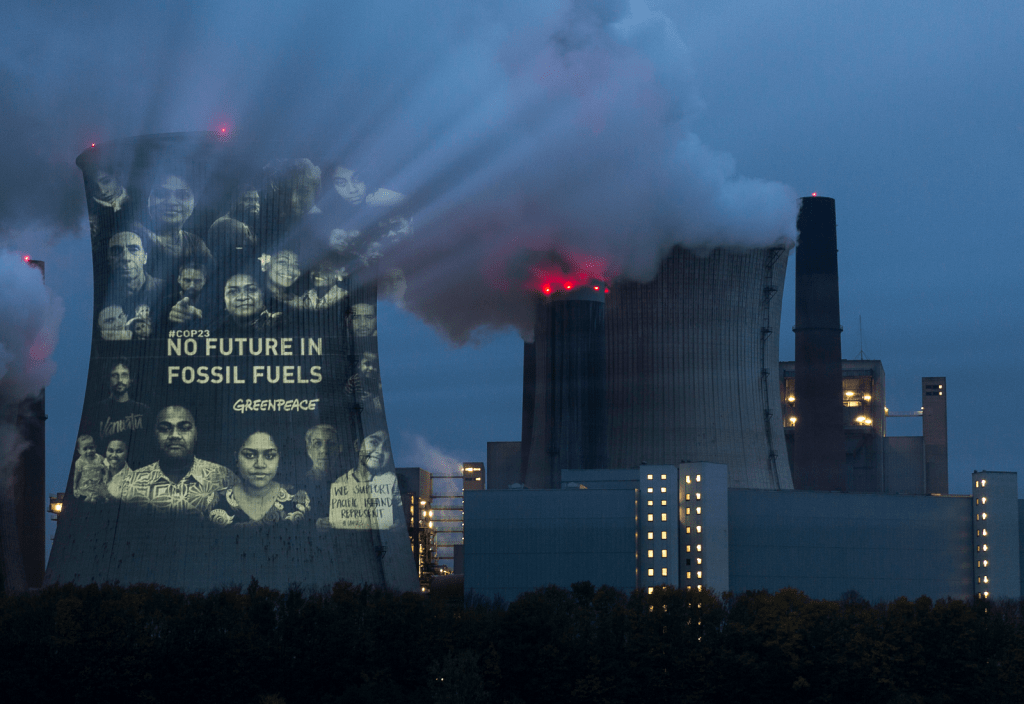 “This report spells out that we must make deep, rapid emissions cuts by 2030 to stand any chance of keeping global warming under 1.5 degrees and makes abundantly clear that solutions exist for at least halving global emissions in that time.

“As the world’s leading scientists continue to urge action by 2030 to avoid catastrophe, Australian politicians continue to put the interests of coal, oil and gas corporations ahead of the health and safety of people and nature. The Australian government has no credible target or mechanism for emissions reduction at the speed and scale that is needed. Fossil fuel subsidies surged to a staggering $11.6 billion last year, and leaked documents revealed the Australian Government actively lobbied to reject findings from this very report around the need to rapidly phase out coal.

“The Australian government is failing in its most basic duty – to safeguard the security of the Australian people.”

Glenn Walker, senior campaigner for Greenpeace Australia Pacific said that this report underlines the need for Australia’s big polluters to speed the transition away from coal.

“The IPCC’s findings put Australia’s coal-burning companies like AGL, Australia’s biggest climate polluter, on notice: speed up your coal closure timelines or risk climate disaster. The current trajectory for the transition away from coal to renewables is still too slow to avoid dire climate threats – and with Australians already reeling from catastrophic flooding, waves battering their doorsteps and other climate impacts, it’s far too high a price to pay,” he said.

“A faster transition to renewables will also unlock the benefit of low-cost power, with wind and solar backed by batteries found to be the cheapest energy source to power our country. With soaring coal and gas prices hurting households, putting an end to polluting fossil fuels will set us up for a fairer and more prosperous future.”

According to the IPCC, solutions exist for at least halving global greenhouse gas emissions by 2030, in line with the Paris Agreement warming limit, with more than half of the potential coming at low or even negative costs. In addition to the vital role of solar, wind, electrification and efficiency, the report underlines the importance of restoring and protecting forests and other natural ecosystems, improving carbon sequestration in agriculture and shifting diets. Money exists to solve the problems but more public and private funding still flows to fossil fuels than for climate solutions. To achieve the needed emission cuts in the near future, financial flows to solutions will need to multiply as they cease for fossil fuels, as there’s no room for new fossil fuel infrastructure.

Today’s report confirms that countries’ climate plans and policies are not in line with the Paris Agreement warming limit, only further increasing inequity and impacting communities already made more vulnerable by the climate crisis. The report’s conclusions provide the framework to governments on how to meet the promises made last year in Glasgow at the UN climate summit, where they agreed to revisit their national mitigation targets by the end of 2022. The next summit, COP27 in Egypt later this year, is where countries will have to respond to the IPCC findings on the continuous lack of action.

Images: Images and videos of climate change impacts are available from the Greenpeace Media Library.