In announcing Australia is back as a constructive, positive and willing climate collaborator, Climate Change and Energy Minister Chris Bowen talked to the Australian government’s bid to co-host COP31 with the Pacific, mentioning the previously announced $900 million in the federal budget towards aid for Pacific nations and claiming Pacific voices have led the climate debate for decades and “they must be heard”. However, today’s statement contained no new funding or policy commitments, particularly on the Pacific’s key demand for a dedicated loss and damage finance facility.

Shiva Gounden, Pacific advisor at Greenpeace Australia Pacific, said it is disappointing that, despite now being in the second week of COP27, the Australian government continued to be all talk while delivering little action.

“The Australian government certainly sounds better than the previous government on climate, but a lack of action means they are failing to meet the promise of their talking points. Simply being better than their Scott Morrison-led predecessors is not good enough, and it shouldn’t earn a gold star from anyone.

“Australia is still ‘very low performing’ on the annual climate change performance index, only rising four places to rank 55th out of 63 countries. Australia cannot be a very low performing country on the issue of loss and damage, particularly given the government’s rhetoric on supporting its Pacific neighbours and co-hosting COP31.

“The idea of loss and damage was actually born in the Pacific some thirty years ago. Pacific Island nations are on the frontlines of the climate crisis and at the forefront of the fight for climate justice.

“We have been calling for loss and damage funding for thirty years so we urge the Australian government to step up, hear us, and answer these calls. We cannot keep kicking the can down the road on loss and damage.

“It’s time for the Australian government to convert its rhetoric on the Pacific and climate into action by supporting the establishment of a dedicated loss and damage finance facility at COP27.”

Ulaiasi Tuikoro, Fijian climate activist and representative of the Pacific Youth Council, said that while the Australian government claimed to be listening to the Pacific, it isn’t hearing the clear calls.

“The Australian government is right to say the Pacific has been leading the debate on climate for decades. But no matter how long or how loudly we speak, we are still not being listened to.

“We do not need more empty talk. We need clear and urgent action. Lives and livelihoods are being destroyed, and we have no time to waste. Australia and other developed countries must support the establishment of a loss and damage finance facility at COP27.

“Australia is part of the Pacific family. Families listen, they act, they come together when times are tough. That is what Australia must now do. Enough talking, we need action.” 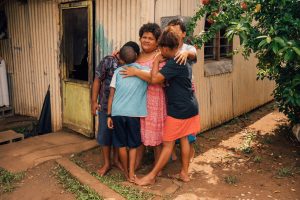 Taruguci is a mother of 4 who’s family experiences flooding almost whenever there is a heavy rain. Unable to move from the house as their family has invested in a
lease for the land, they now have to deal with the hard reality that flood waters can upset the flow of their daily lives at any unexpected time.
Taruguci’s children motivate her to keep pressing on through the hardship that they constantly face due to flooding. When the floodwaters rise, she must flee with her family to an evacuation center – there have been times when they must do this in the darkness of night.