Energy giant AGL has launched legal action against Greenpeace Australia Pacific, in an attempt to have its logo removed from the campaign which exposes AGL as the biggest corporate climate polluter in Australia.

You’ve no doubt heard that phrase before. It’s been repeated over and over, in all of Greenpeace’s press materials calling on AGL to close its coal burning power stations by 2030 and replace them with clean energy.

Those dirty coal power stations are the reason that AGL produces more than twice the greenhouse gas emissions of the next biggest corporate polluter, Energy Australia, and more than BHP, Rio Tinto, Glencore and Qantas combined. 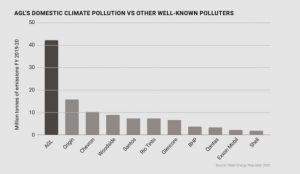 But while energy industry insiders all know the dirty truth about AGL, a slick marketing campaign has allowed the company to pull the wool over the eyes of many of its customers and a lot of the general public.

That’s why our hard-hitting advertising campaign touched a nerve. Our ads are letting people, perhaps duped by AGL, know that the company is the biggest greenhouse gas emitter in Australia.

Australians increasingly want their electricity produced by clean energy like wind and solar and not planet-heating coal. That’s why AGL doesn’t want its customers to know that it generates about 85 percent of its electricity from coal. Instead, AGL prefers to keep burning coal at a rate that is unrivaled in this country while it attempts to deceive its customers by packing its ads with smiling, happy people dancing around wind turbines and solar panels.

As well as demanding that we pull the ads, AGL’s legal team has attempted to cast doubt on the accuracy of our report Coal-faced: Exposing AGL as Australia’s biggest climate polluter. 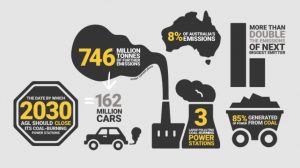 These are classic scare tactics that the cashed-up fossil fuel industry uses to try and stifle legitimate criticism.

The case will be heard in the Federal Court in Sydney on June 2. We’re ready for a David and Goliath battle, and the truth is on our side.

AGL likes to slap a wind turbine on their ads to hide their dirty coal pollution, and now they’re trying to slap a lawsuit on us to keep us quiet.

But we will not go quietly and neither will our ads.