Ningaloo Reef is among UNESCO's list of World Heritage Sites, and one of only three located in Western Australia. This classification itself highlights the importance of Ningaloo Reef in sustaining the planet’s ecosystem. But let’s take a dive into some of the natural wonders of this reef.

Ningaloo Reef is among UNESCO’s list of World Heritage Sites, and one of only three located in Western Australia.

This classification itself highlights the importance of Ningaloo Reef in sustaining the planet’s ecosystem. But let’s take a dive into some of the natural wonders of this reef.

Probably the most well-known aspect of Ningaloo Reef, is the annual congregation of around 300-500 Whale Sharks each year. This event is the largest documented aggregation of Whale Sharks in the world! The gentle giants pose no threat to humans, and many tourism businesses arrange day trips for people to go swimming with the Whale Sharks from a safe distance. 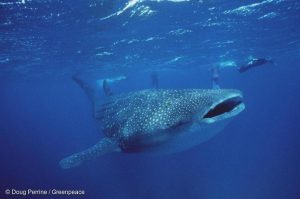 This is the annual event that triggers the Whale Shark’s visit to the Reef. Roughly taking place over a week after the full moon in March and April, the coral spawning cycle is important to the regeneration of 300+ coral species and the reef as a whole. Krill and plankton are attracted by the coral spawning, and the Whale Sharks come to eat these micro-creatures.

Ningaloo Reef has an incredible spread of marine biodiversity. Along the 300 species of coral, there are 155 sponge species, over 700 species of reef fish, around 650 species of mollusc and 600 species of crustaceans, in addition to over 1,000 species of marine algae. In certain areas, the Reef homes an unusual variety of marine turtles, with roughly 10,000 nests laid along the coast every year! 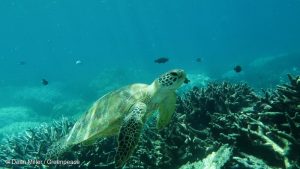 Ningaloo is a site worth protecting, and as it is a World Heritage Site, it is subject to the Australian federal government’s Environmental Protection and Biodiversity Act 1999 (or the EPBC Act).

A number of Australian tourism businesses also rely on the preservation of Ningaloo Reef to earn a living. All the more reason why we can’t allow Woodside’s Scarborough gas project to devastate the Dampier Archipelago which resides close to Ningaloo Reef.

If you haven’t already, please sign our petition to stop Woodside’s dirty gas project, and send an email to Woodside’s CEO, Meg O’Neill and demand that Woodside abandon this reckless project.

As our Green Guardians, your support is crucial in the fight against Woodside! Thank you for helping us protect Australia’s unique environment.