How I ended up half naked in The North Face store.

Blog post by Tim Gavin - Greenpeace Volunteer  I remember the first time I heard about the pollutants involved in the manufacturing of waterproof gear. I was working in a hiking store and contemplating buying a new rain jacket when a friend told me: “You know they’re really bad for the environment, right?”

I didn’t know because the company I worked for and whose gear I sold didn’t want anyone to know about their dirty little secret.

My friend was talking about PFCs (per- and polyfluorinated chemicals), which are pollutants that get released into the environment during the production of waterproof gear such as rain jackets, boots, sleeping bags and backpacks. They end up all over the world, even in remote and pristine places like the Arctic.

When I found out Greenpeace were going to be campaigning for the removal of PFCs from The North Face’s waterproof gear, I was excited to get a chance to hold The North Face to their mantra of love and protection of the great outdoors.

It’s wrong that the choice of our clothes should contribute to the pollution of the environment. It’s wrong that companies mislead people into buying products by which they are unknowingly damaging the wild and pristine places they wish to explore. Nobody wants to see an ecosystem slowly choked by pollutants just because they bought a new rain jacket. 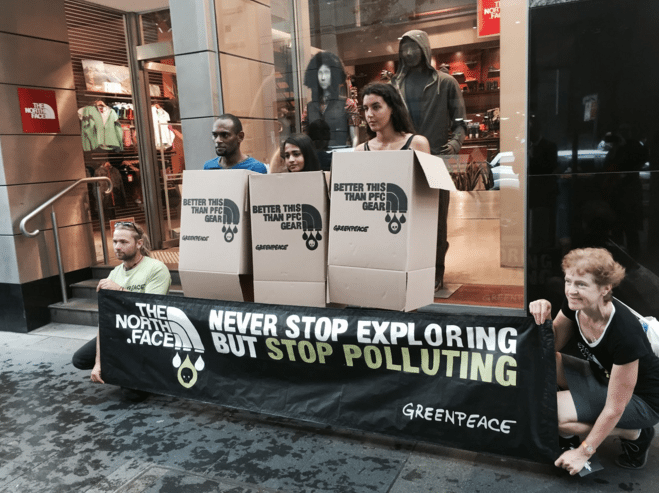 I decided to get involved because as a bushwalker and lover of the great outdoors, I know that not only me, but all members of the outdoor community want a solution. We want PFC-free alternatives that are going to keep the places we love safe and clean, instead of slowly accumulating hazardous chemicals.

I was part of a group of Greenpeace activists who paid a visit to some The North Face stores in Sydney and Melbourne to call on them to show true leadership by removing all PFCs from their manufacturing processes.

We entered the stores in search of waterproof gear for an upcoming trip. However after a good look around, unsurprisingly, we couldn’t find any of their waterproof gear that was PFC-free and wouldn’t pollute the wilderness we wanted to explore.

Feeling uncomfortable with the idea of buying something that would only harm the planet we are trying to protect, we left the changing rooms wearing the only thing we could find that we were comfortable in – a cardboard box. 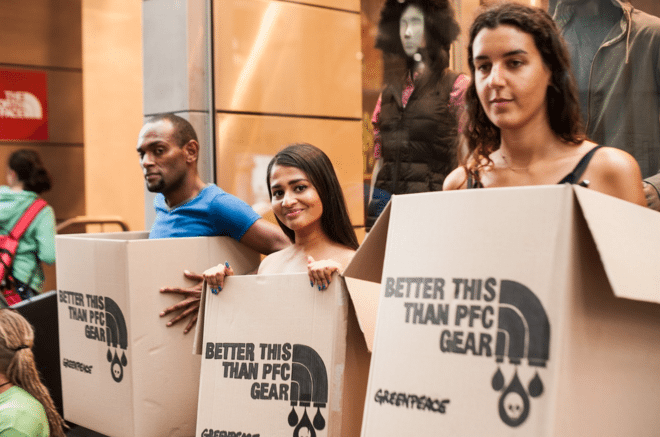 This sounds a little bit ridiculous when you think about it, but so too is the fact that a company that claims to love the environment would use PFCs in their gear!

Obviously, their boxes were not particularly waterproof. So to stay dry on our next trip, we’re all going to have to stand together and tell the North Face to go PFC-free.

Wan’t to get involved? Print out this poster, take a selfie holding it, and share via your social media channels. Don’t forget to tag @TheNorthFace and hashtag #Detox