There are 12 species of birds and 3 species of mammals unique to this area (endemic). The province is home to 7,380 plant taxa, with almost half (3,620) endemic to the area!

Do you know what the geographical area with the richest biodiversity in Australia is?

You’re probably inclined to say it’s the Great Barrier Reef, but it is actually the Australian South-west Botanical Province, in Western Australia.

There are 12 species of birds and 3 species of mammals unique to this area (endemic). The province is home to 7,380 plant taxa, with almost half (3,620) endemic to the area!

The endemic mammals in this area include the; honey possum, western brush wallaby, and quokkas. The honey possum is exceptionally unique, as it is the only true nectar-eating marsupial, and it also pollinates plant species by transferring pollen collected on its body into flowers!

Male honey possums have very large testes for their overall size, and they have the largest sperm size of any other mammal on the planet. Perhaps this is why they are not endangered! 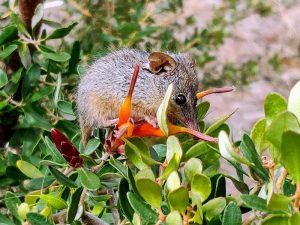 John Stanley Beard was a British-born ecologist who devoted much of his life to the study of Western Australian botany. He wrote a book in his retirement titled ‘Plant Life of Western Australia’, which was published in 1990. This book chronicled his accounts of environmental studies in Western Australia, and also provided his breakdowns of WA’s flora diversity into four provinces, including the ‘South West Botanical Province’.

One of the areas in this massive ecoregion is Esperance, off the coast of which lies Middle Island. On this island, there is a foot-print-shaped body of water called Lake Hillier. But certainly the most mind-blowing trait of this lake is that the water is a stunning, strawberry milkshake coloured pink! 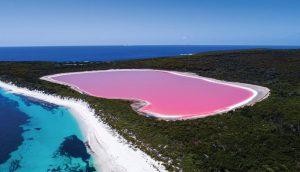 From the Western Australia tourism page for Hillier Lake.

While other pink lakes exist in Australia and throughout the world in places like Utah, Lake Hillier certainly has one of the most vibrant hues of pink. It is suspected the colouring comes from the lake’s high level of salinity, but there is no definitive evidence that this provides it’s amazing colouration.