The lifeforms in the ocean that don’t appear on conservation websites are microorganisms – the ‘unseen majority’... 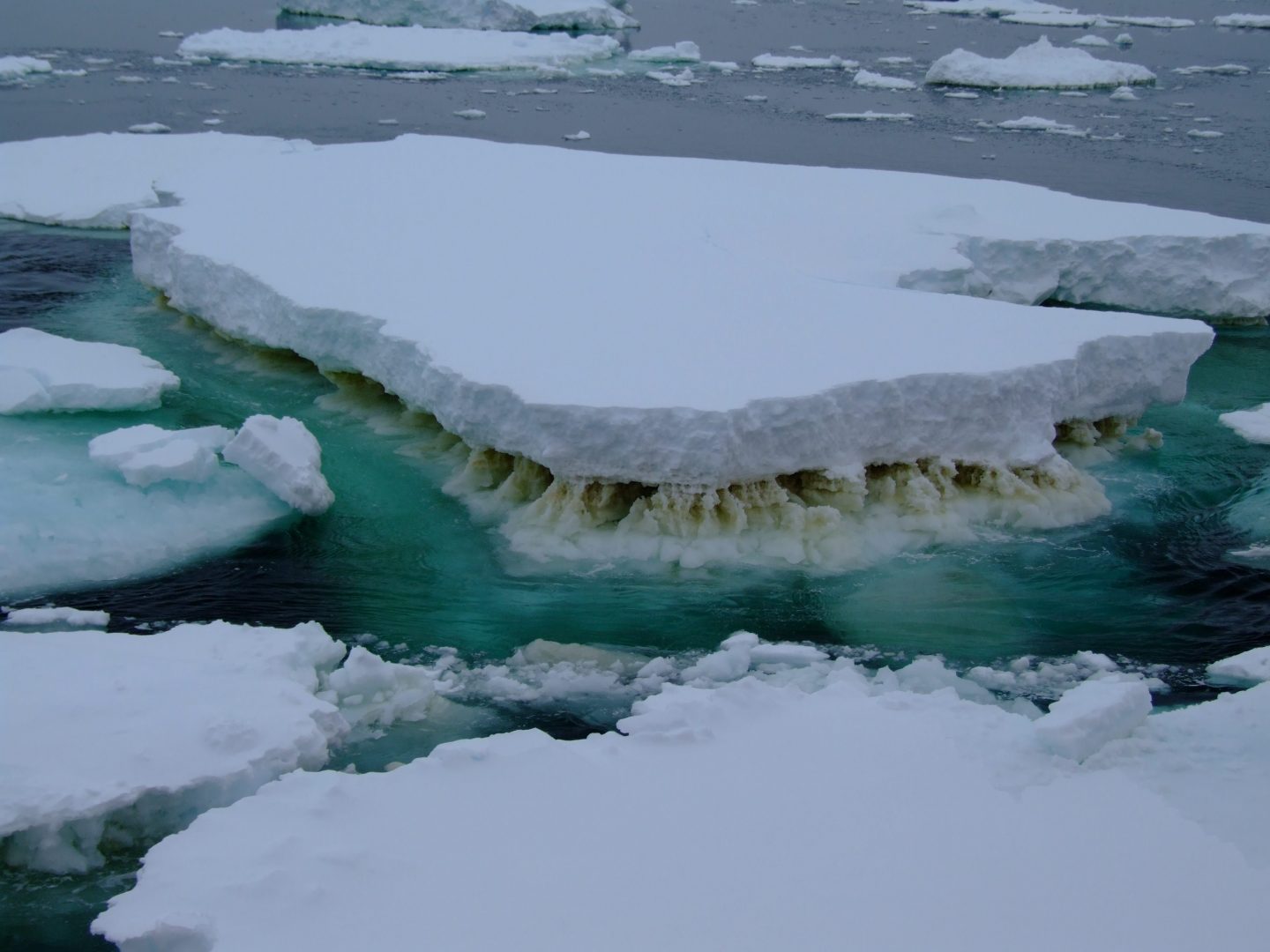 Photo of the sea ice showing the brown phytoplankton

The lifeforms in the ocean that don’t appear on conservation websites are microorganisms – the ‘unseen majority’. Despite being invisible to the naked eye, they represent about 95% of the biomass in the global ocean, numbering about one million in one millilitre of coastal water, with total numbers in the global ocean heading towards 10e30.

Aside from their huge numbers and substantive biomass, they also perform critical functions in global biogeochemical cycles that help ‘the world go round’ – not literally in terms of the Earth’s spin (of course), but importantly in terms of recycling Earth’s finite nutrients.

At the ocean surface, ‘phototrophic’ phytoplankton use light energy to fix carbon dioxide, thus sequestering CO2 from the atmosphere. The phytoplankton are called ‘primary producers’ and form the beginning of the food web which branches out to feed all larger lifeforms. Other, ‘heterotrophic’ microorganisms turn over waste products from higher organisms and remineralize detritus material, thereby making nutrients available again for growth.

The Southern Ocean which extends down and around Antarctica performs a particularly important role in sequestering carbon dioxide. Tiny phytoplankton can actually be seen living in their homes in sea ice (see the brown layer in the cross section of sea ice in the photograph below). 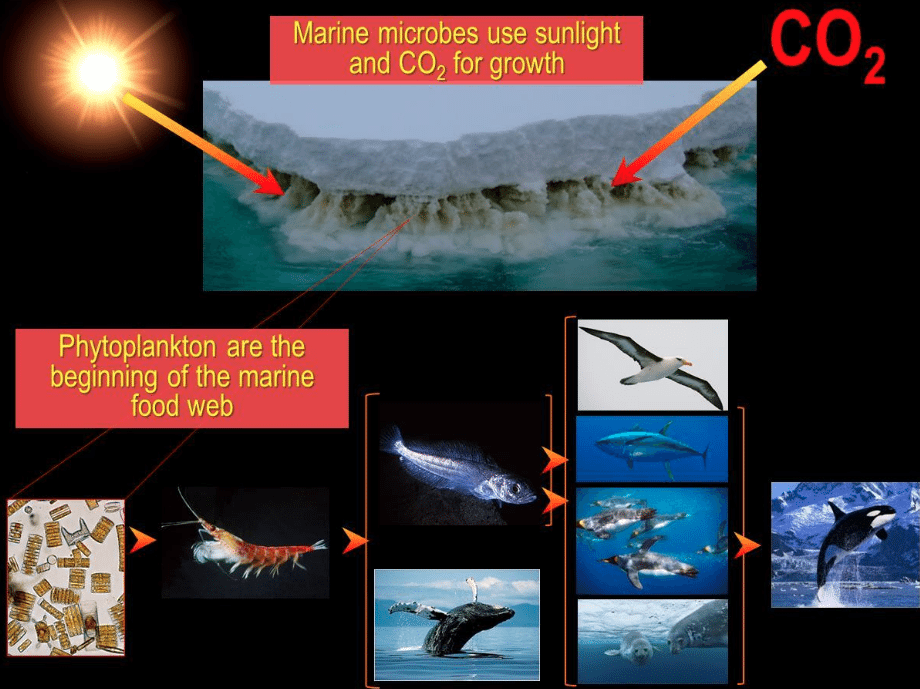 Imagine how many are present within the sea ice in order for such a rich brown colouring to be visible. These phytoplankton are the beginning of the Southern Ocean food web, feeding populations of krill and onwards to all the fish, sea birds and mammals that inhabit the southern reaches.

The natural growth and melting of sea ice in Antarctica represents one of the largest physical seasonal changes on the planet with up to 20 million km2 growing each winter and most melting away during summer.

Because the total annual growth of sea ice has hugely diminished in northern polar regions and will do so in the south if global warming trends continue, phytoplankton that normally live in sea ice will no longer have homes (the sea ice). As a result they will not be able to grow and feed other ocean life – in essence, ocean life will starve.

It is inevitable that microorganisms as a whole will survive in a changing world, but global warming and increasing pollution will cause changes in communities and the processes they perform.

These changes will be on a massive scale (global ocean) and we have little understanding of what the consequences will be. Antarctic waters are already experiencing several million visitors per year (tourism, fisheries, research stations) generating pollution (plastics, drugs, wastes) and potentially introducing invasive species and diseases. 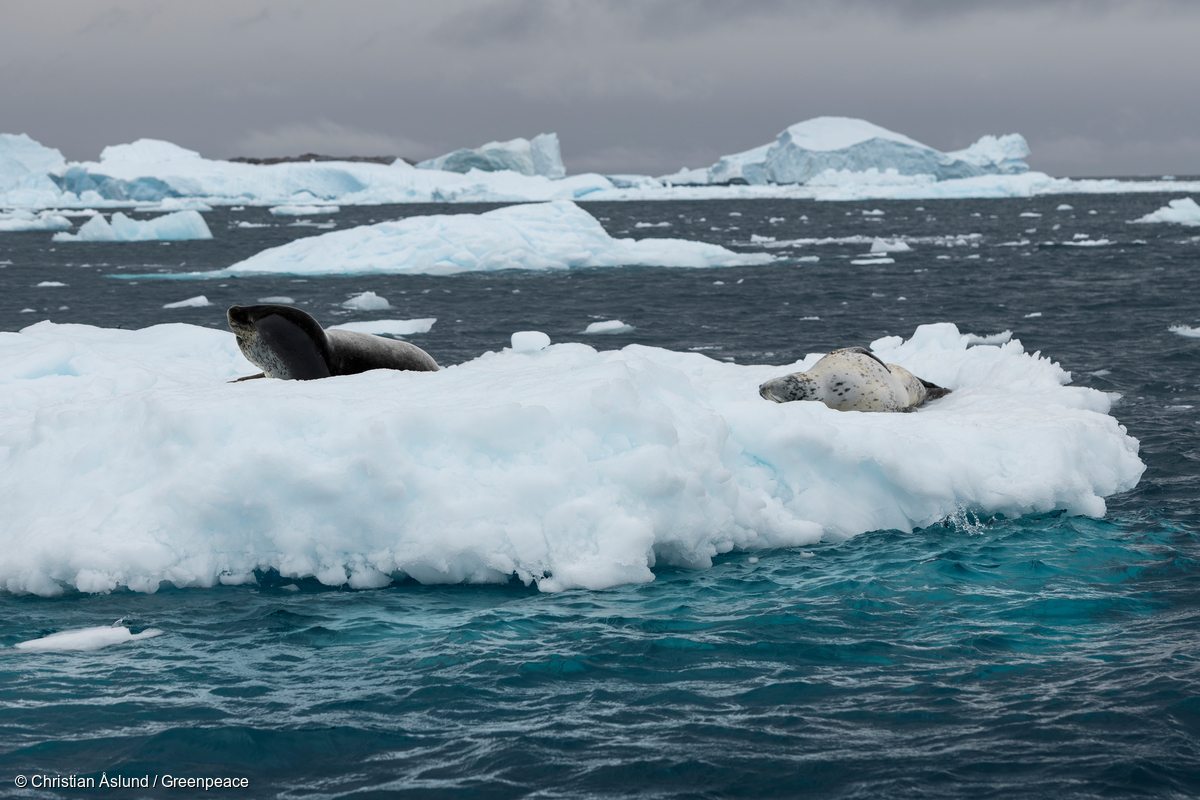 Leopard seals (Hydrurga leptonyx) resting on an icefloe at Cierva Cove, in Hughes Bay south of Chavdar peninsula in the Antarctic.

The risks for Antarctic life and flow on effects for the global ocean are high. Indigenous species will be impacted. Changes must occur to address the underlying problems. Here I describe one element for motivation to change. The science and industry of renewables provides the very credible means of making important elements of change. Now all we need in this wonderful world to enact the changes is sensible politics.

We have a once in a lifetime opportunity to create the largest protected area on Earth – an Antarctic Ocean Sanctuary. This would close the door to commercial exploitation of this incredible place. Over a million people from all over the world have joined the campaign to make this a reality. It’s easy, click the button to get involved!

This is a guest blog written by Professor Rick Cavicchioli, School of Biotechnology and Biomolecular Sciences, UNSW.

My research area is environmental microbiology. I study Antarctic microorganisms, discovering which types live in and around Antarctica, learning how they evolve and grow in the cold, and assessing how they are likely to respond to ecosystem changes, including climate change. I have a special interest in Archaea – the third domain of life. The research is important because environmental microbes enable all other life forms on Earth to exist, and the vast majority of life on the planet grows at low temperatures.