There’s never been a more exciting time to save the Reef. 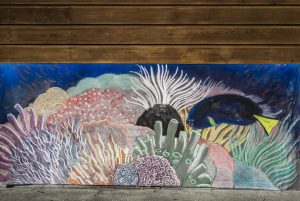 Climate change has already warmed the world by more than a degree Celsius and the consequences for the Reef appear to be catastrophic. Reef scientist Professor Terry Hughes said he didn’t expect to see a bleaching event like this for another 25 years and unless we make an immediate and drastic reduction in carbon pollution the Reef will not recover.

Unless we as a community choose to keep fossil fuels in the ground the Reef will not recover. But there’s no need to panic. The Age of fossil fuels is over. We live in the Age of renewables. There’s never been a more exciting time to save the Reef.

The Age of fossil fuels is ending just in time to save the Reef.

The era of fossil fuels is ending.

The world’s largest economies the USA and China announced moratoriums on new coal mines in the wake of the Paris #COP21 Accords.

Thermal coal prices from Newcastle are running at under $US60 a tonne, less than half the $US135 a tonne earned five years ago.

Coal mines like the Glencore Tahmoor coal mine in New South Wales are closing.

Peabody is at risk of bankruptcy.

For the Queensland State Government car registrations are a bigger revenue earner than coal.

Since 2012 nearly 20 000 jobs have been lost in the coal industry. McDonalds in Australia employs more people than coal.

More than 50,000 abandoned mines scar our landscape. The toxic legacy of mining in Australia means the public will likely pay the estimated $50 billion it will take to rehabilitate our poisoned  land and water.

We live in the Age of Renewables

Globally there is more than enough solar power to satisfy needs for electricity. Sunlight which reaches the earth’s surface is enough to provide 7900 times as much energy as we can currently use.

In Australia solar and wind resources are greater than coal, oil, gas and uranium combined. Australian renewable resources could power the whole world for ten years.

Australians spent more than $8 billion on rooftop solar since 2007.

The fossil fuel era is over and while the world’s carbon pollution stopped, Australia’s accelerated.

The Australian Government are determinedly swimming in the opposite direction to the global current towards renewable energy.

Investments in renewables in Australia have fallen because the Liberal-National Government have actively supported fossil fuels through massive subsidies and discouraged investment in renewables at the expense of the Great Barrier Reef and the jobs of the future. And the jobs of right now.

There has never been a more exciting time to save the Reef. This is a moon-shot moment.

We could make a just transition in a decade and save the Reef.