The women behind Greenpeace’s first campaign

In celebrating 50 years of Greenpeace, we’re taking this opportunity to celebrate the lives of some amazing women who were involved in Greenpeace’s first campaign trip to Alaska in protest of U.S. nuclear weapons testing.

Although men got most of the headlines for early Greenpeace campaigns, many strong and visionary women helped bring Greenpeace to life from the beginning. While Greenpeace’s first campaign trip aboard the Phyllis Cormak in 1971 consisted of a crew full of men, many women were instrumental in organising the voyage.

In celebrating 50 years of Greenpeace, we’re taking this opportunity to celebrate the lives of some amazing women who were involved in Greenpeace’s first campaign trip to Alaska in protest of U.S. nuclear weapons testing.

Dorothy Stowe was the first president of her local civic employees union in Rhode Island in the United States. She spent her wedding night at a civil rights dinner, campaigned against nuclear weapons, and immigrated to Canada with her husband Irving in protest against the US-Vietnam war. She helped launch the first Greenpeace campaign, and hosted early Greenpeace meetings in her home. Always serving food (and sometimes tea and cookies!) Dorothy infused the radical politics of the day with a calm sense of family and community.

Marie Bohlen was a nature illustrator involved with American environmental organisation Sierra Club. After moving to Vancouver with her husband and son, they met the Stowes and co-founded the Don’t Make A Wave Committee, which would later become Greenpeace. 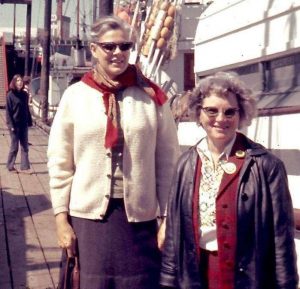 In February 1970, while discussing how to stop US nuclear bomb tests in Alaska, Marie proposed the idea of sailing a boat up to the test site and confronting the bomb. This, of course, became the first Greenpeace campaign. Since the voyage had been her idea, Marie intended to go on the boat. But in the end, she decided to remain in Vancouver and work with Dorothy Stowe and the others. Thus, the Phyllis Cormack – the first Greenpeace boat – carried only men.

The British Columbia Voice of Women, led by Deeno Birmingham, played a key role in that first campaign, raising funds and petitioning the Canadian government to support the protest. Deeno drafted her husband, Dave Birmingham, to serve as engineer on the Phyllis Cormack. Lille d’Easum, a director of the Voice of Women, wrote the first Greenpeace technical report, a study of radiation effects.

Dorothy Metcalfe was a reporter when she met her husband, Ben Metcalfe, also working in journalism. During the first Greenpeace campaign she converted her home into a radio room, relaying radio reports from Ben – who was onboard the Phyllis Cormack –  to the world’s media. When the US delayed the test, and the crew contemplated safe harbour in Kodiak, Alaska, Dorothy encouraged them to push on toward the Aleutian Islands.

Dorothy lobbied Canadian Members of Parliament, which resulted in three motions urging the US to cancel the test. She called Canadian Prime Minister Pierre Trudeau’s office, insisting he travel to Washington to confront the Americans. Through the media she sent a message “From the wives and families of the men on board the Greenpeace. Our men are risking their lives… for the benefit of all mankind.” 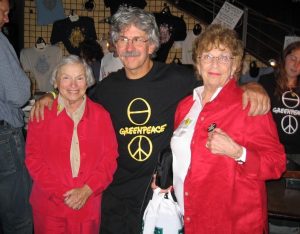 From left to right: Dorothy Stowe, Rex Weyler, and Dorothy Metcalfe in 2004.

Zoe Hunter was a member of the UK Campaign for Nuclear Disarmament, when she met Bob Hunter in London in 1962. She introduced him to the pacifist work of Bertrand Russell and took him on the 1963 peace march to the Aldermaston nuclear facility. They married and had two children. Zoe worked with Dorothy Stowe and Dorothy Metcalfe to provision the first two Greenpeace ships.

This article has been adapted from The women who founded Greenpeace by Rex Wyler.