It’s a day of mixed emotions for Greenpeace. For 22 years our ship the Rainbow Warrior II and her crew have confronted environmental destruction around the world, bearing witness and taking action to protect our planet. And today we say farewell to her. 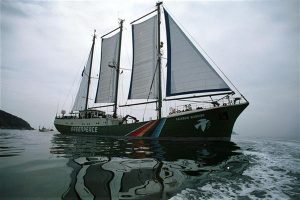 After the bombing of the Rainbow Warrior I by French government agents in Auckland in 1985, the Rainbow Warrior II became our flagship in 1989. We sent her straight to work on a European tour followed by a driftnet campaign in the Pacific. Later that year, a United Nations moratorium on high seas large-scale driftnets was passed.

Since then the Rainbow Warrior II has become a firm representation of the non-violent direct action that we run our campaigns on and she has been an integral tool in some major wins.

When researching her most iconic wins in our area, I asked colleagues around the office about their own experiences onboard and the 1995 visit to the nuclear test zone at Mururoa Atoll and the subsequent cancelling of the testing by French authorities came up more than once. In 1996, The Comprehensive Nuclear Test Ban Treaty (CTBT) was adopted at the United Nations – an appropriate end to the Warrior’s long campaign to end French nuclear testing in the Pacific.

The Greenpeace Toxic Free Asia tour during 1999/2000 exposed pollution hotspots and promoted alternatives and solutions in Asia to create a toxic free future.  Rapid industrialisation and growth has made Asia, particularly East and Southeast Asia, one of the most dynamic regions in the world. But the economic success of the region has come at the expense of severe environmental damage.

Greenpeace has now had an official presence in the area for more than 10 years and the Toxic Free Asia ship tour launched our South East Asia and Indian offices. Today we have offices in over 40 countries across Europe, the Amercias, Africa, Asia and the Pacific.

In 2004 the Rainbow Warrior took to the Pacific Ocean to launch the beginnings of the tuna overfishing campaign. The Greenpeace tour aimed at highlighting the overfishing of the Pacific Ocean by foreign distant water fishing fleets. The tour specifically focused on the mass depletion of tuna stocks and the severe consequences this has created for local fishing communities.

Her most recent and final assignment was testing water and seaweed radiation in waters off Fukushima.

So knowing all this, it seems only fitting that she is being handed over to a values based organisation, working on sustainable social, health and environmental initiatives with some of the poorest communities in the world. The Rainbow Warrior II will be transformed into a hospital ship for Friendship, providing health care to communities in Bangladesh, especially those in the most inaccessible terrains which have been experiencing the worst effects of climate change.

At the handover ceremony today in Singapore the ship will no longer be known as the Rainbow Warrior and all Greenpeace insignia will be removed. The ship will then be refitted by Friendship and will be renamed the Rongdhonu which means rainbow in Bangladeshi.

To view the historic ceremony live at 6pm on Tuesday 16th August please go to: http://www.ustream.tv/channel/farewell-rainbow-warrior-ii