'Climate inaction is an unforced error'

Australia cannot sit on the sidelines any longer. We must take action to reduce our emissions in this coal-fuelled crisis. 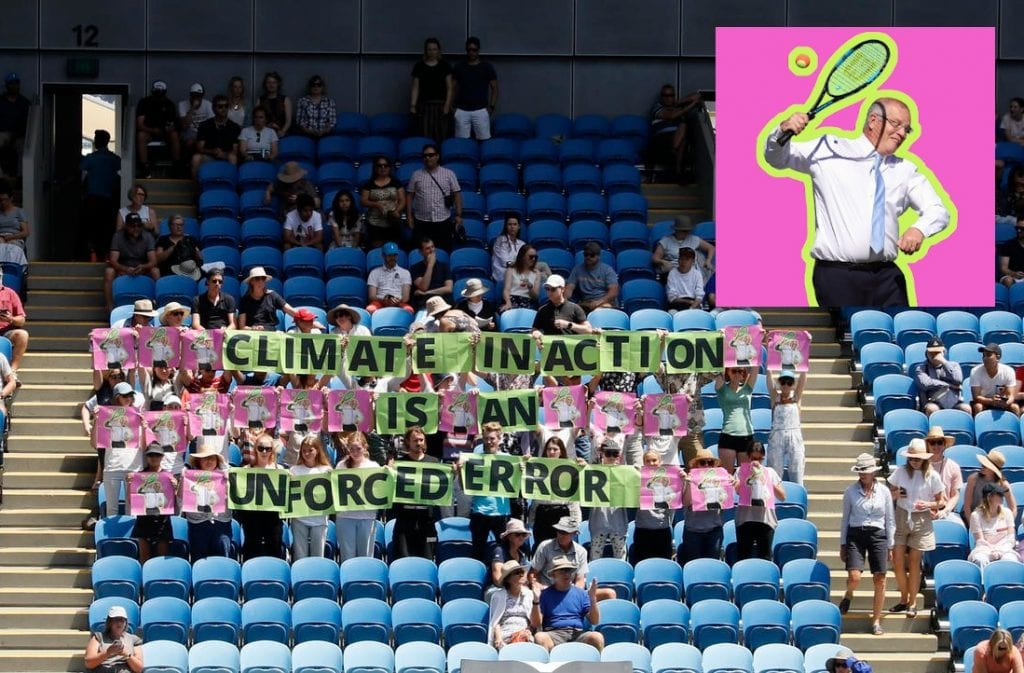 Greenpeace volunteers bring message to the Australian Open calling upon Scott Morrison (insert) to take climate action to protect the sports we love.

Nothing makes it feel like summer in Australian quite like beaches, barbecues and sport. But with more extreme heatwaves, a longer bushfire season, and bushfire smoke choking our cities, the Australian summer of sport is under threat.

This long weekend Australia and the sport-loving world turned its gaze to Melbourne to watch what experts fear could be the Last Australian Open.

Greenpeace and supporters were courtside too, during the men’s doubles third-round match that pitted Simone Bolleli and Benoit Paire against Henri Kontinen and Jan-Lennard Struff.

As the action unfolded on court, we unfolded our banner in the stands calling for real climate action from Prime Minister Scott Morrison.

“Climate inaction is an unforced error,” the banner read. We held up dozens of pictures of Morrison fumbling with a tennis racket and ball. 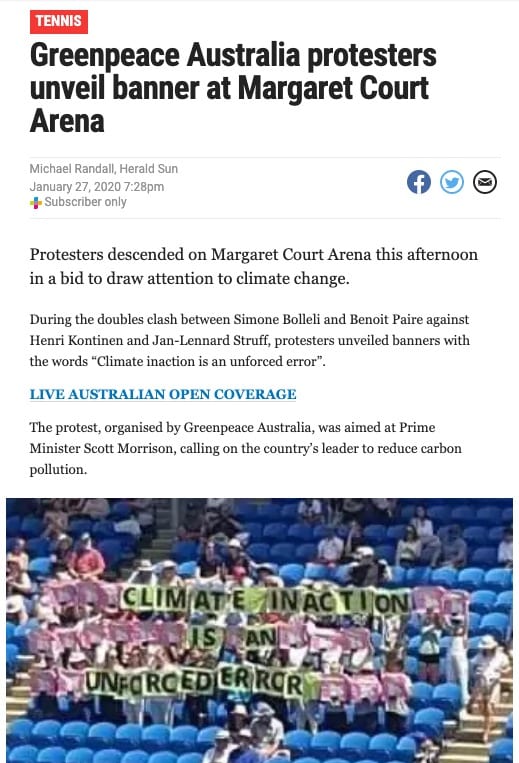 The Greenpeace action was covered by the News Corp papers. (Screenshot)

We did this because experts warn 2020 could be our last Australian Open. Greenpeace is calling on Morrison to protect iconic Australian institutions like the Open by urgently reducing greenhouse gas emissions, which have been rising for the past four years.

It’s Morrison’s fumbling off-court that’s seen Australia fail to reduce its carbon pollution. This failure is an unforced error that has exacerbated the bushfire crisis and disrupted play at the Open.

Two out of the last three years of the Aus Open have seen players and fans suffer huge health effects from climate change-driven heatwaves and bushfire smoke.

Without swift action to phase out coal – the number one driver of climate change – extreme weather events will continue to get worse.

Leading scientists and former tennis players have questioned whether the Australian Open can continue in its current format with play increasingly disrupted by extreme heat and bushfire smoke. Some scientists warn we should expect hotter summers and more intense bushfires, which is bad news for our Australian tournament already under pressure.

The CSIRO’s David Karoly is among a chorus of climate scientists calling for the tournament to move from the middle of summer to protect players and fans. The warning signs have been around for a while but they’re becoming more acute. Climate impacts have already struck this year.

In heartbreaking scenes, bushfire smoke forced Slovenian tennis player Dalila Jakupovic to collapse to the ground in a coughing fit. In top physical form, the 28-year-old had no previous respiratory problems but was forced to retire from the match because she couldn’t breathe. She later said it was “not fair” she and fellow athletes were forced to compete in unsafe conditions.

On the same day across the city, a match involving former world number one Maria Sharapova was aborted when the umpire noticed players struggling to breathe in stifling conditions. Other players like Bernard Tomic, who has never had breathing problems, were forced to use inhalers.

And these impacts don’t stop at the sidelines. Fans have also choked on bushfire smoke. Soon the sight of dust masks at the Australian Open will be as common as hats and sunscreen. 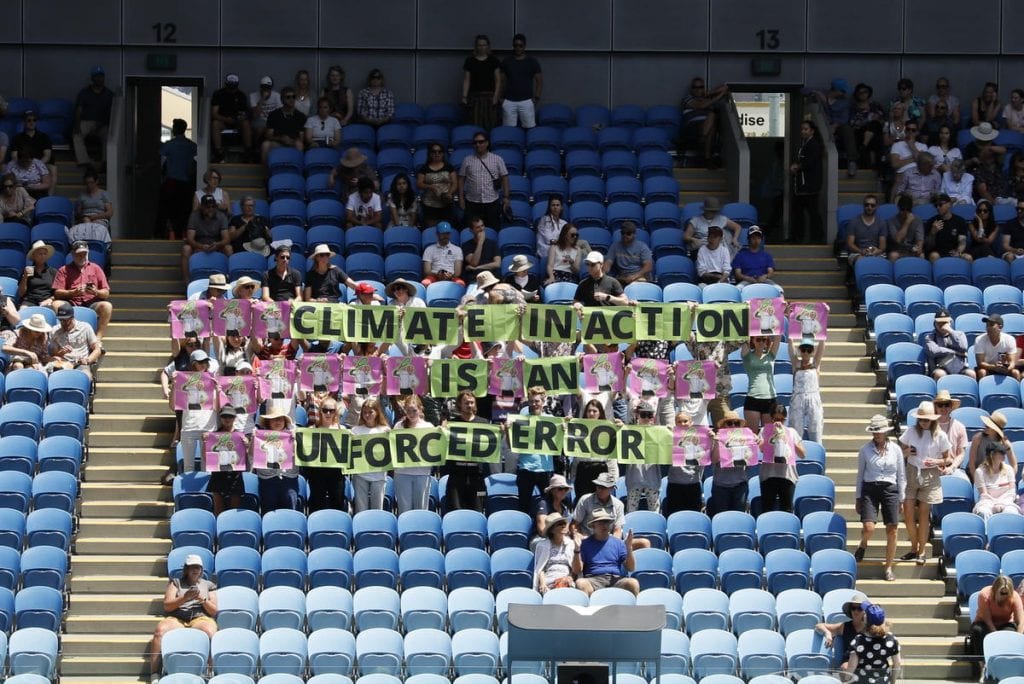 And if the smoke doesn’t get you, the heat will.

Extreme heat has plagued the Open since 2014, when Canada’s Frank Dancevic fainted, calling Open conditions “inhumane” as temperatures exceeded 40°C for several days in a row.

Belarusian Victoria Azarenka said play at Rod Laver Arena was like “dancing on a frying pan”. Water bottles melted on court, players and ball kids collapsed and vomited due to heat stress, and more than 1,000 spectators were treated for heat exhaustion.

At the 2018 Open, it was a case of out of the frying pan and into the fire, when the on-court temperature reached a scorching 69 degrees. France’s Alize Cornet collapsed during play.

Events that year rightly put the Australian Open heat policy in the spotlight, prompting the creation of a new heat scale for 2019 that saw play suspended on day 11. 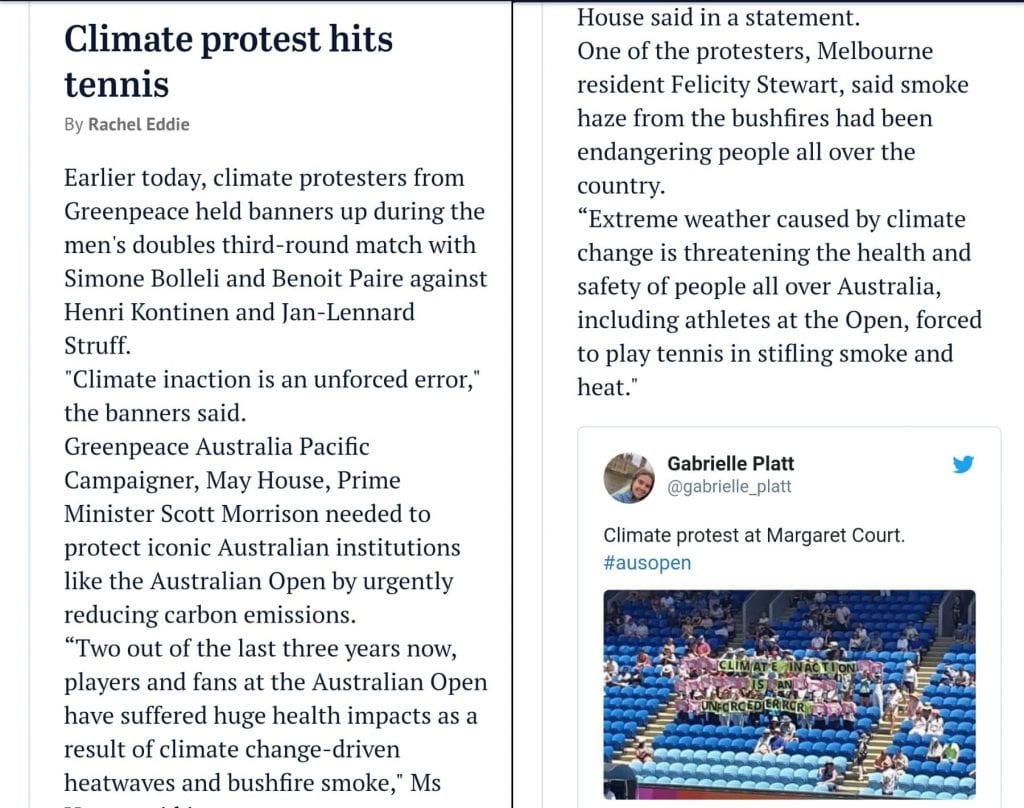 The Age covered the action in the stands on the day. (screenshot)

It’s terrifying to think the fires causing the smoke and these heat-stress events are happening under 1.5 degrees of warming. What will the impacts be when warming surpasses 3 degrees, which the science says is on track to occur by 2100. We only need to look at how players, fans and matches have been affected over the last 10 years to see the trend heading in a dangerous direction.

We have known for years that burning coal is the main driver of climate change. We know this because experts told us so, but vested interests have drowned their voices out, while wilfully ignorant politicians tell outright lies that spread like wildfire, with just as harmful results.

If we don’t want 2020 to be the last Australian Open, we need to listen to the experts.

More than six months ago 23 former fire chiefs tried to warn Morrison to prepare for a potentially catastrophic fire season. Morrison failed to listen. Even today too many members of his government live in denial about this coal-fired climate crisis. 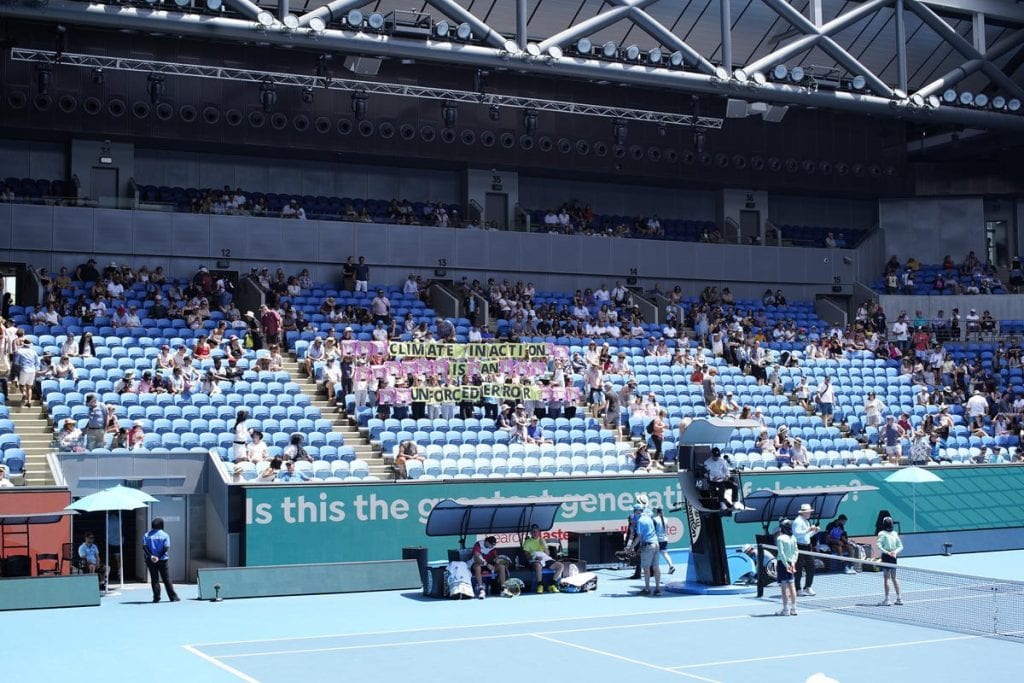 Australians cannot be spectators any more. We don’t have the luxury. This bushfire season is the tragic wake up call many of us feared would come. When the crisis passes, we will hold climate blockers and deniers to account and make sure they understand this climate change is a very real threat to our Australian way of life.

Any politician that loves this country and the traditions that make us who we are must take the necessary action to address this climate crisis. Otherwise, we can kiss goodbye our treasured summer of sport.