The Fight Against WA Gas

Woodside are attempting to prioritise profits over our planet, with their Scarborough gas mining project. Greenpeace Asia Pacific are supporting the Conservation Council of Western Australia’s fight against the most climate-polluting project ever proposed in Australia.

11 years ago, citizens of Western Australia were marching through the town of Broome in a protest against a proposed gas project that would have decimated their local marine life. The Goliath in this story? Woodside, Australia’s largest oil and gas company, along with their partners of other fossil-fuel industry giants.

The community were faced with seemingly insurmountable odds in a fight to protect both the natural environment and their town from industrialisation. But then 8 years ago in 2013, Australian environmental groups jumped aboard the community’s cause, culminating in a 20,000 people concert rally in Fremantle against Woodside’s dirty gas endeavours.

Only a month later, Woodside pulled out of the project. It is important to remember stories like these because it reminds us that big victories for the environment can be championed by the power of people.

Had these activists not stepped up to the challenge, Woodside would have destroyed WA’s precious coastlines. 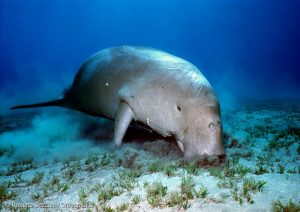 Dugong’s were one of the species at risk amidst the 50㎢ of ocean that would have become a marine deadzone had Woodside not been pressured to pull out from the James Price Point gas hub project.

Once again, Woodside are attempting to prioritise profits over our planet, with their Scarborough gas mining project. Greenpeace Asia Pacific are supporting the Conservation Council of Western Australia’s fight against the most climate-polluting project ever proposed in Australia.

The proposed development would lie in close proximity to the World Heritage Listed Ningaloo Marine Park, and will be even closer to the Dampier Archipelago, the richest marine sanctuary in Western Australia. These waters shelter many endangered species of magnificent marine life such as dugongs, sharks, turtles, dolphins, manta rays, humpback whales, orcas, and whale sharks. 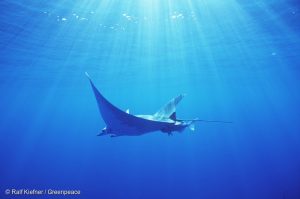 Manta Rays are one of the many gentle giants that dwell in Ningaloo reef.

But the greenhouse gas emissions the proposed Burrup Hub would cause are equivalent to 15 coal-fired power stations.

What this fails to acknowledge is that climate pollution is not limited to carbon emissions. Woodside have not provided any assurances as to how they will protect the local marine ecosystem, because this is not possible with a project such as this.

Underwater sound and light emission are two forms of pollution that occur on a regular basis as the result of routine deep-water oil and gas mining. Light and sound pollution disrupts marine mammal’s feeding, breeding, resting, and migration behaviours.

These emissions can also mask sounds that animals use for navigation, and cause them psychological distress, and even permanent hearing damage – devastating for whales and dolphins that communicate via echolocation.

Installation of infrastructure is another factor that will damage Scarborough’s marine ecosystem. Pipes and anchors need to be installed along the seafloor in order for an offshore rig to operate and mine for gas, this can damage coral, sponges, and other deep-sea fauna

Why spend $16.5 billion on a gas project instead of on renewables? Don’t be fooled by the environmentalist marketing used by fossil-fuel corporations. No amount of greenwashing can alter the fact that fossil-fuels are a limited resource, and mining for them puts the environment at risk.

While their website talks about Woodside’s commitment for carbon neutrality by 2050, this is an outdated target, and you will find nothing on their website about protecting the precious marine life that inhabit the Western Australian waters.

Corporations like Woodside will always prioritise profits over our planet, but we beat them 8 years ago to protect James Price Point, and we will beat them this time too.

You can help by signing our petition against Woodside’s dirty gas project, sending a letter to WA politicians and ministers, and continuing your generous support of Greenpeace.

Woodside still has environmental approvals to get through, and the CCWA will deliver a Supreme Court challenge on the 20th of December against the Scarborough gas project.

Greenpeace will continue the fight against Woodside for however long it takes for this dangerous project to come to an end, by raising awareness, supporting activist groups, and lobbying with government officials.