The climate is changing. When will the NSW Liberal Party?

First Wentworth. Then Victoria, and the school climate strike. The swing against the climate wreckers is on – and the momentum is building across NSW. 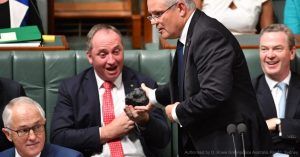 All around Australia people are choosing more wind and solar. They rejected the Victorian Liberal Party’s plan to scrap the renewable energy target and are rejecting leaders and parties who don’t have a credible plan to act on climate change.

Yet Gladys Berejiklian’s state Liberal Party is still clinging to coal. NSW has the most out-dated, coal-dependent electricity system in Australia. 81% of our electricity comes from burning coal in the oldest fleet coal power stations in the country. After eight years in Government, the Liberal Party still doesn’t have a plan for climate change or energy.

How long must voters wait?

Now is the time for political leaders to draw a line in the sand. Are they just as destructive in their climate denial as their federal counterparts? Or can they put their disunity aside and put the people first?

The climate has changed. Will the NSW Liberal Party change, too?