Today is a big day for our oceans. It is good news for sea turtles and sharks, sea birds and tuna. It is also a great day for hundreds of thousands of workers at sea, many of whom have been victims of horrendous working conditions and human rights abuses.

Today is a big day for our oceans. It is good news for sea turtles and sharks, sea birds and tuna. It is also a great day for hundreds of thousands of workers at sea, many of whom have been victims of horrendous working conditions and human rights abuses. Following  two years of intense pressure by Greenpeace, environmentalists, labor unions, and human rights organizations, today Thai Union, the world’s largest tuna company, announced a breakthrough package of reforms that marks a new beginning for the seafood industry.

What does this mean?

Thai Union is not your average company, and tuna is not a typical industry. A multi-billion dollar business based in Bangkok but with operations all over the world, Thai Union owns major brands like Chicken of the Sea, John West, Petit Navire, Mareblu, Sealect, and many more. The company sources shrimp, crab and tuna from most of the world’s oceans, which are caught, processed, transported or sold by hundreds of thousands of people. Thai Union’s commitments to improve the sustainability of its seafood and help protect the workers who produce it will send ripples throughout supply chains involving many of the world’s largest seafood businesses, as well as fishing powers like China, Spain, France, Taiwan, Korea and the United States.

What did Thai Union agree to do?

There are too many new commitments to name, but here are some of the highlights:

You can find a more detailed overview of Thai Union’s commitments here. 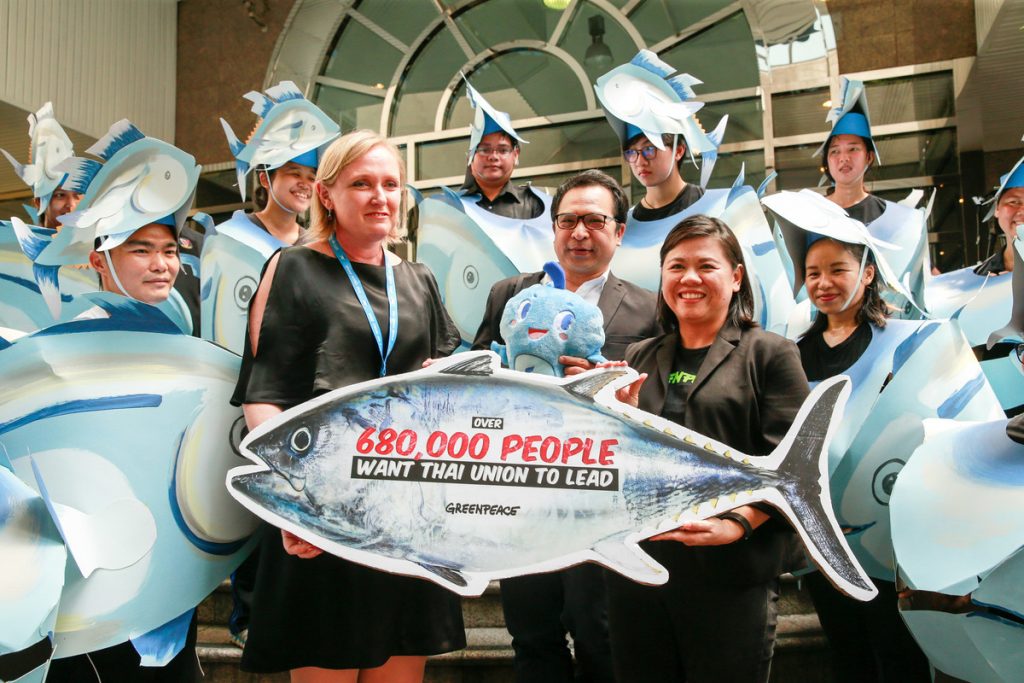 Dr. Darian McBain, Group Director of Sustainable Development for Thai Union, receives a tuna placard on which is written “Over 680,000 people have signed petitions calling for a more sustainable and ethical tuna industry.

How did this happen?

Few things worth fighting for come easily and this was no exception. Greenpeace has worked  to reform tuna fisheries for more than ten years. We have used the Greenpeace ships to confront illegal fishing vessels in the Pacific and Indian Oceans and participated in dozens of policy meetings. We have spoken at conferences and met with executives and government officials from Washington, DC to Samoa. There were banners and blockades, billboards, cats and mermaids. Above all, there were millions of people who joined us in demanding change. Some were environmentalists, labor organizers or human rights activists – but even more were everyday people: parents, students, and others who demanded tuna options that do not come at the expense of people’s welfare or the health of our oceans.

For Thai Union the real work is just beginning. We will support them where we can, and hold them accountable where we must. At our request, Thai Union has agreed to pay for an independent third party audit of their progress on this agreement in just 18 months time. We will build on the momentum created by these reforms and demand that other seafood businesses step up and follow suit. With consumer power now reaching and influencing the biggest seafood businesses in the world, the message to them is clear – they too need to take action to eliminate worker and ocean harm from their supply chains.To fail to act is to fall behind the progressive momentum – the size of their business or relative anonymity are no longer a place they can shelter from the growing global demand for reform.

To ensure that we have healthy oceans far into the future, Greenpeace will continue to fight for a network of large scale ocean sanctuaries that can protect biodiversity, mitigate climate change, and rebuild fish populations. This includes securing a strong UN agreement to protect high seas biodiversity, and working with coalition partners to protect the rapidly changing waters in the Arctic and Antarctic.

Most of all, we will continue to work side by side with our allies, supporters, activists and communities around the world to ensure that giant corporations relinquish their grip on our oceans — and that the oceans are protected for future generations.