Stop the Margiris and spare the oceans

We Australians love a local link. When big news happens around the world, instinctively the first thing we check is whether an Aussie was involved. But, this time around, the story is coming to us in the form of the imminent arrival of the 142 metre long Margiris super trawler. 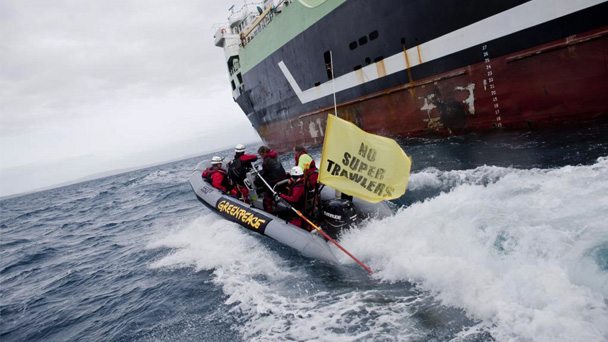 The Margiris is the second largest fishing boat built. It dwarfs the Hobart class destroyers commissioned to protect our shores.

Already, thousands of Australians have expressed their alarm and opposition to the super trawler arriving in our waters. But this outrage is part of a wider global story that goes all the way from the European Union in Brussels to the World Bank in Washington and to fishing villages in Africa and the Pacific.

The basic problem is that there is too much capacity in the global fishing fleet. According to the World Bank, the global fleet is 2½ times what the oceans can sustain. The situation in Europe is even worse. And, with European stocks of fishing running out, the biggest and worst of Europe’s fleet – boats like the Margiris – have gone in search of other fishing grounds.

The seas off the west coast of Africa have been among the hardest hit. Earlier this year, the west African nation of Senegal went to the polls. Among the usual big issues there was an unexpected topic running hot with voters: super trawlers. In May, the newly elected government of Senegal acted decisively, kicking out the super trawlers and demanding they empty their catches in the capital, Dakar. Local Senegalese fishermen have reported a surge in their catches since this action was taken.

Super trawlers such as the Margiris are oversize factory fishing vessels. They can pull enormous nets capable of encircling 13 jumbo jets. Once the fish are sucked up on board via a huge vacuum hose and the by-catch is discarded, the fish are frozen and stored on board. This enables boats like the Margiris to stay at sea for months on end, fishing and storing millions of tonnes of fish.

Of course fish are not the only animals caught up in such huge nets. Dolphins and seals are routinely caught and drowned. By-catch is one of the main concerns of the Environment Minister, Tony Burke, as he considers his options on the Margiris. He is right to be worried. The company looking to bring the Margiris to Australia, Seafish Tasmania, claims there is new technology to reduce these impacts. But the research the company relies on still means more than one seal is killed for every trawl. And even this has not been trialled on the Margiris.

The EU is going through a once-in-a-decade process to sort out its broken fishing laws but the big end of the fishing industry – including the owners of the Margiris – is a powerful lobby group. The Gillard government has the power to stop the Margiris and that would be great news for our local oceans. But if Australia follows the lead of Senegal and says no to super trawlers, it could also be a key to changing the politics of fishing in Europe, too.