Sending the power of hope to Vanuatu

Last week was a scary, sad and sickening wake-up call for many Pacific Islanders. 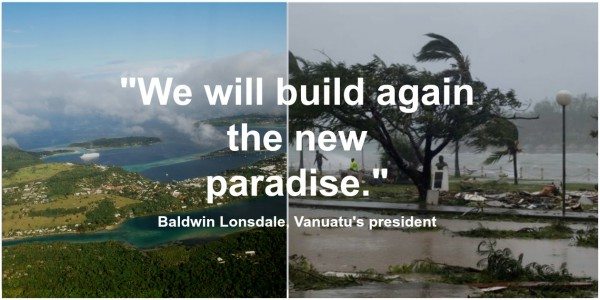 Here at Greenpeace’s Pacific headquarters in Fiji, we were on full alert from Monday, as Cyclone Pam’s name began being muttered around the region.

Water bottles were filled, phones and computers were charged, candles were bought, windows were locked and food was cooked as the the country went on high alert.

As it happened, Cyclone Pam spared us all but some heavy winds, high seas and inconvenient power-cuts, inflicting her worst on our brothers and sisters in Vanuatu, Kiribati, Tuvalu and the Solomon Islands.

In the late hours of Friday March 13, the ‘monster’, reached maximum strength, with winds of up to 165 mph.

At approximately 11pm (local time), the western edge of the cyclone ripped through Efate Island of Vanuatu, including the country’s capital, Port Vila, home to a population of 44,000. 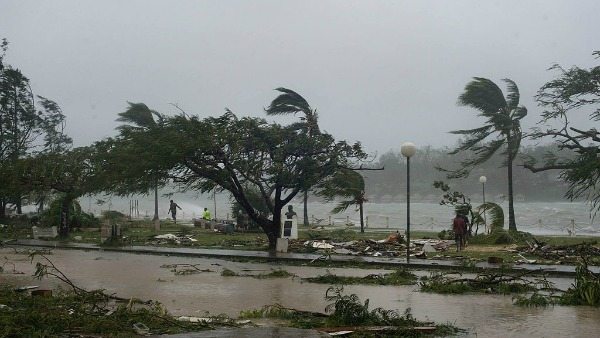 The tap water is contaminated, communication lines are down, electricity lines are down and the hospitals are closed, roofless or demolished. The airport is closed to all but military aircraft. The country is isolated.

It is the worst disaster in Vanuatu’s history. 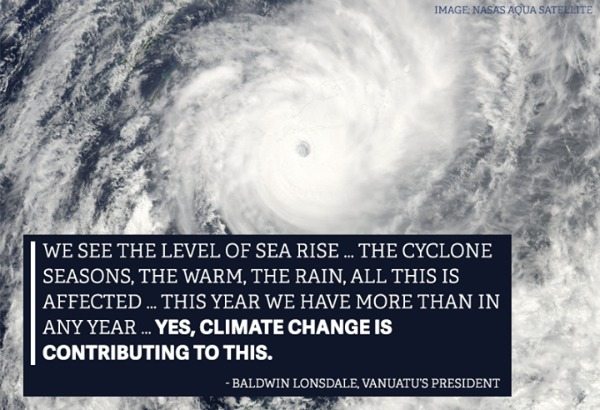 Coincidentally, Vanuatu’s President, Baldwin Lonsdale, was in Japan at the UN World Conference on Disaster Risk Reduction on the same day that Cyclone Pam made landfall in Vanuatu.

Speaking in front of world leaders, President Lonsdale said that climate change is the leading cause of severe weather in Vanuatu.

“We see the level of sea rise … the cyclone seasons, the warm, the rain, all this is affected … This year we have more than in any year … climate change is contributing to this.”

Visibly weary and red-eyed from lack of sleep, Lonsdale said in an interview with the Associated Press that Vanuatu has been “wiped out” by the catastrophe and they would have to “build a new paradise again.”

Anote Tong, President of Kiribati, agreed that it was “time to act” on climate change after Cyclone Pam wreaked unthinkable damage and flooding to his nation, as well as to Tuvalu.

“For leaders of low-lying island atolls, the hazards of global warming affect our people in different ways, and it is a catastrophe that impinges on our rights … and our survival into the future. There will be a time when the waters will not recede.” 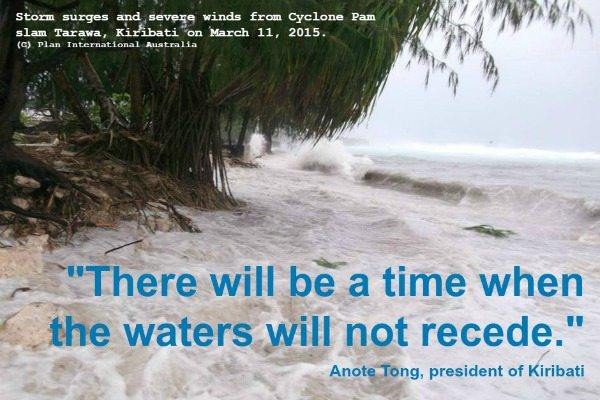 Joining the chorus of Pacific leaders calling for the world to act to substantially reduce greenhouse gas emissions, President Emanuel Mori of the Federated States of Micronesia (FSM) also spoke out:

“For my country, natural disasters and undeterred global warming brought about by human activity will lead to the same thing, whether abruptly or gradually – that is the disappearance of our islands.”

Sitting on the grass, under the calm skies here in Fiji (with my feet in the ocean because there is no beach these days during a king tide), it is terrifying to think how vulnerable we are.

How quickly the winds change and paradise can be swallowed. Everything we love and everything visitors flock here for coud be destroyed. Nothing is certain anymore. Every pattern of the past is breaking. And so are our homes and our hearts.

From Greenpeace Australia Pacific, to those in Vanuatu, Kiribati, Tuvalu and everyone who has been affected by the cyclone, we want to take this moment to send our thoughts, our apologies, our condolences, but most importantly, our hope. Our hope for a world that will not only see paradise survive, but flourish.

Right now, our friends in the Pacific urgently need clean water, food, shelter and supplies. Some of the organisations helping to provide emergency assistance are: OxfamAustralia, Australian Red Cross, UNICEF Australia, Save the Children Australia, and CARE Australia. If you can, please consider donating to help humanitarian workers on the ground respond to this crisis.