Replacing Liddell with Renewables Cheaper and Less Polluting than Gas

Greenpeace launches the report: Scenarios for the Replacement of the Liddell Power Station Report

The cheapest and lowest emissions option to replace the Liddell coal-burning power station in the New South Wales Hunter Valley is clean energy backed up by batteries, according to a new report by energy analytics firm RepuTex. 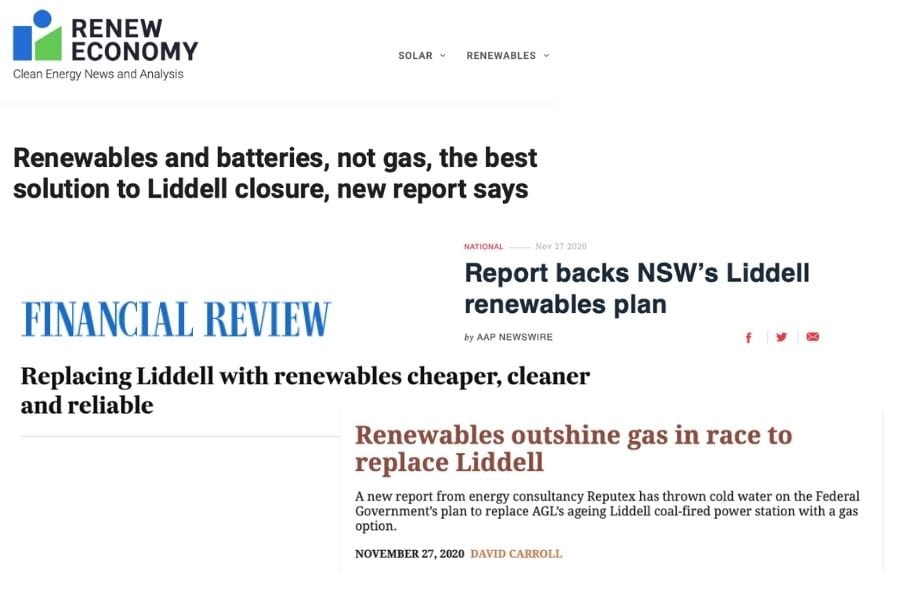 New modelling undertaken by consultancy Reputex, and commissioned by Greenpeace Australia Pacific has shown the cheapest and lowest emissions option to replace Liddell is clean energy backed up by storage.

One of Australia’s oldest coal-burning power stations, Liddell in the New South Wales Hunter Valley, is set for closure by April 2023 and needs to be replaced. At 49 years of age, Liddell is now significantly beyond its engineering lifetime and carries heavy maintenance costs.

The furore over the closure of the Liddell is emblematic of this politically fabricated problem. How Liddell is replaced will have a huge impact on NSW’s energy supply, and on Australia’s greenhouse gas emissions.

In September this year, the Morrison government threatened to build a new 1000MW gas-fired power plant to replace Liddell if the energy sector didn’t produce 1000MW of dispatchable power by April 2021.

For months now, Prime Minister Scott Morrison and Energy Minister Angus Taylor have been unjustifiably fear-mongering around the closure. Despite the best advice of economists, scientists and energy industry experts, the Morrison Government is advocating that Australia replaces coal with gas.

The RepuTex report compared the results of the NSW government’s just-legislated electricity infrastructure plan that will see the creation of a number of renewable energy zones with that of the Morrison government, which wants to see Liddell replaced with a gas power station.

Despite the Morrison government’s commitment to fossil fuels, Australia is harnessing the opportunities offered by the clean energy revolution.

In response to market forces and the climate crisis, Coalition Governments in South Australia, Tasmania and New South Wales have set targets to replace ageing and unreliable coal-burning power stations with cheaper and reliable renewable energy.

But cheaper, cleaner, more reliable energy and future-proof jobs is not a goal of the federal Coalition Government.

After years of sitting on their hands and extending the life of the old Hunter clunker, the Federal Government needs to find a solution, fast. And it’s backing another fossil fuel despite overwhelming evidence supporting the business and environmental case for renewables.

Greenpeace Australia Pacific Head of Research and Investigations, Dr Nikola Casule said the Reputex report builds on growing evidence that clean energy should be at the centre of federal energy policy, driven by the declining cost and increasing reliability of renewables.

“This new report shows conclusively that renewable energy is the best option for replacing Australia’s coal-burning power stations. Building new gas infrastructure is an expensive, unnecessary diversion that won’t reduce emissions. Replacing coal with gas is like replacing a typewriter with a fax machine – they’re both obsolete technologies that no longer meet Australia’s energy needs.”

The Reputex report shows that replacing the ageing and unreliable Hunter Valley power station with renewables backed up by batteries is 17% cheaper than replacing Liddell with gas and will result in fewer emissions.

It’s also the best option for reducing emissions, with the modelling showing the renewable energy solution would see NSW emissions fall to 34 per cent below 2005 levels.

“Renewables firmed with storage solves the so-called ‘energy trilemma’ — affordable, reliable and cleaner power. This report demonstrates that by continuing to add renewables and storage to NSW’s grid, the state will enjoy reliable power that’s cheaper and much better for the environment than gas,” senior advisor to the Climate and Energy College at Melbourne University, Simon Holmes à Court said.

Angus Taylor needs to scrutinise this report and learn the lessons from it. All week he has demanded to see the modelling that underpins NSW Energy Minister att Kean’s energy policy. Now that he has it, he can’t bear to look at it.

It’s the modelling Angus Taylor ‘wants’ but can’t afford to see because it pours water on his desire for a gas-led recovery and proves, once again, that renewable energy and batteries are the cheapest, cleanest and safest way to replace coal.

The solutions are already out there, all we need is for Angus Taylor to come to the light.