Our power, our future: Puerto Rico’s road to a #JustRecovery 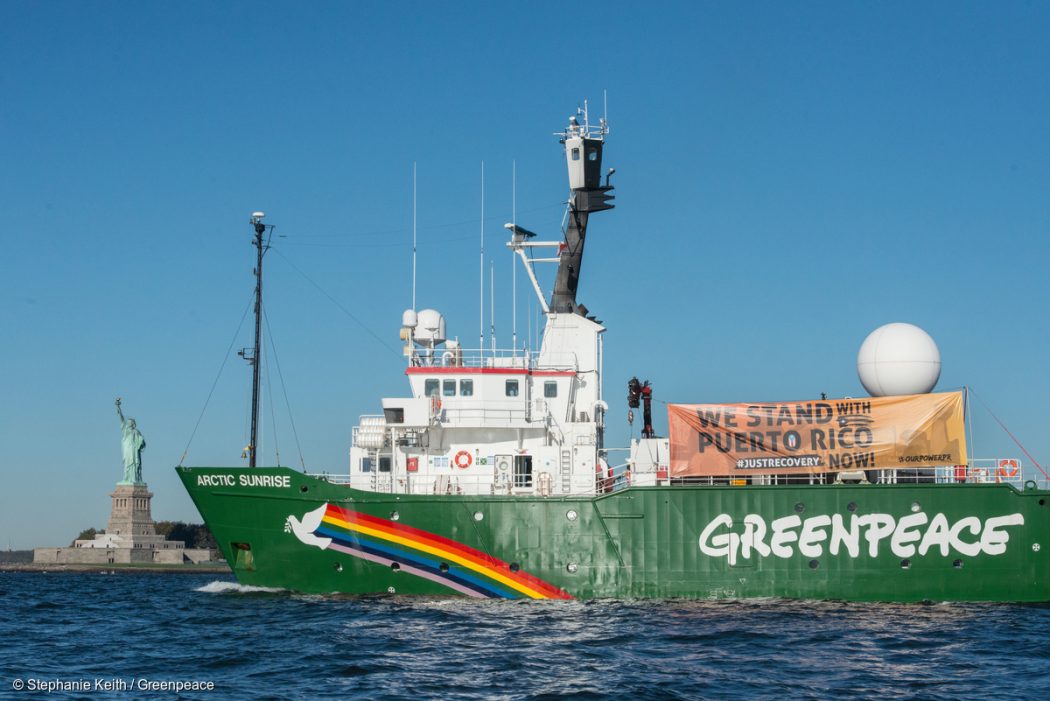 The category four storm completely destroyed the island’s power grid, already damaged by Hurricane Irma two weeks prior. This left all 3.4 million residents without electricity; officials have estimated it will take up to six months to restore power to parts of the island. Roughly 80% of the island’s agricultural land was wiped out in the storm, devastating farmers and leaving millions of people dependent on imported food. Crippled infrastructure means access to basic human needs like clean water, healthcare, and sanitation is dangerously limited.

Most tragically, the death toll has climbed to 48, with more than 100 people still reported missing nearly a month after the storm made landfall.

Disaster capitalists are already lining up to profit off the rebuilding of Puerto Rico. Corporate real estate developers, energy utilities, banks, and fossil fuel companies look at an island in need and see a business opportunity. We see a humanitarian crisis that can only be solved by restoring power to communities fighting for climate justice.

That’s why we’re joining the Our Power Puerto Rico Campaign for a #JustRecovery.

Even when Trump and his administration have failed them, communities are coming together to help one another and begin the rebuilding process. Greenpeace is proud to join the Our Power Campaign for climate justice — which includes the Climate Justice Alliance, UPROSE, the Grassroots Global Justice Alliance, WhyHunger, It Takes Roots, and Grassroots International — as well as the campaign’s partners on the ground in Puerto Rico, Organización Boricua.

Too often in U.S. history, disaster response has been short-sighted, inequitable, and even overtly racist. In Puerto Rico, we have an unprecedented opportunity to chart a new course.

A just recovery and rebuilding means that communities on the frontlines — not CEOs or corporate lobbyists — lead the decisions about their infrastructure, their energy, and their future. For Puerto Rico, this means:

And here’s how you can get involved.

As a coalition, we’ll be bringing much-needed supplies like solar panels and sustainable agriculture tools to rural communities in Puerto Rico. More than that, the Our Power Campaign is bringing experts and organisers to help communities build a lasting model for just recovery and send a clear signal to the powers in Washington — people-centric recovery isn’t just possible, it’s absolutely necessary.

The historic Greenpeace ship the Arctic Sunrise is headed down the Atlantic coast right now, sailing towards Caribbean waters to shine a light on Puerto Rico’s road to recovery. While U.S. trade law — specifically the Jones Act, legislation that has disenfranchised Puerto Rico for almost a century — prevents the Sunrise itself from carrying goods between ports, the ship will accompany a separate chartered boat to deliver supplies and share the stories of communities working for a just recovery.

None of this would be possible without people like you stepping up and demonstrating your solidarity with Puerto Ricans fighting for justice and recovery. Let’s make sure the world knows about Puerto Rico’s hope and recovery, not just its tragedy. SHARE this story today!