Unfortunately, our hands, the ones that clutch our pregnant stomachs and whisper to our unborn during concrete cracking cyclones, the ones that lift our loved ones onto tree branches during tidal surges, the ones that pull dying crops from newly formed seasides, the ones that have to rebuild homes time and time again, can not alone turn the tide of the climate crisis.

No. Our fate doesn’t lie here. It lies in the fingers of those tapping on computers, doing the math, making big bad decisions based on some even worse numbers. It lies in handshakes, between country and company.

Yes. I’m talking about Australia. The Carmichael mine. The mine that has been dubbed ‘unbankable’. The mine that is an environmental and economic disaster. The mine that the Australian government has just confirmed they are going ahead with anyway. With taxpayers’ money. 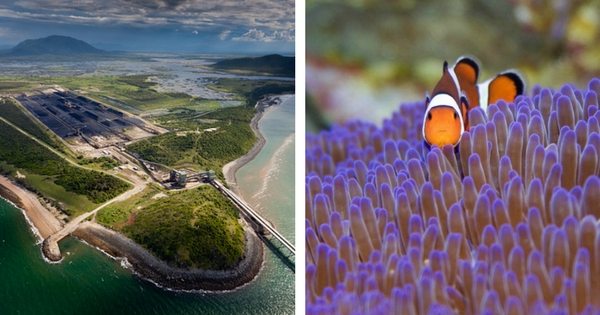 On the Left: Abbot Point port where tonnes of coal will be shipped from the Carmichael mega mine. On the Right: A Clown fish in the Great Barrier Reef

As a Pacific climate activist, one of the hardest things to swallow is that these same hands, sometimes make their way across the sea, visit our islands, and try to tell us how we should do things. They try to remind us that we are friends. They expect that we don’t know who they are, what they have done, what they have said.

But we know you, Mr Patrick Suckling, Australian Ambassador for Climate Change.

We know what you are selling. The imaginary idea of ‘clean coal’. The make-believe story that we can have both a climate conscience and a growing coal industry. You may be able to sell that story to some of your own people. But you will not sell it here. We know you. We know better.

Last week, Australian Ambassador for Climate Change Patrick Suckling was in Suva for bilateral talks with the Fiji government. Fiji is the current president of the Conference of Parties to the United Nations Framework Convention on Climate Change (UNFCCC). A group of us from the Pacific Islands Climate Action Network (PICAN) wrote Mr Suckling an open letter on February 3, 2017 while he was speaking at a Gender and Climate Change negotiations training in Suva, Fiji.

Please read the letter below. And share it if you can. Raise your voice, raise your hand. And Australians – please don’t allow your government to use your money on a sinking project that makes the world a more dangerous place for us all.

Time and again, Pacific island leaders have explained that climate change is the single greatest threat to the livelihoods, security and well-being of the peoples of the Pacific.  We must work together to tackle climate change.

Unfortunately and there is no polite way to put this, your government is knowingly undermining our future and the future of our children. In full knowledge of the facts and long-term impacts, the Australian government is pressing ahead with new coal mines and coal-fired power plants.

This directly contradicts global efforts to tackle climate change and puts our communities in peril.

To add insult to injury, you personally encouraged the Indian energy corporation Adani to invest in a massive new coal project in the Galilee Basin in Queensland.  In your previous role, as Australian Ambassador to India, you described the proposed mine – which will produce 60 million tonnes of thermal coal per year for 60 years – as an ‘outstanding project’.

In recent years, cyclones of unprecedented strength have reminded us of the brutal reality of a changing climate.  In Fiji last year, and Vanuatu in 2015, Category 5 cyclones killed dozens, reduced towns and villages to rubble, and pushed people into poverty.

Just this week you explained Australia will continue to support Fiji during the recovery from Cyclone Winston, as part of Australia’s commitment to working with the region on climate change.  Your recognition that climate change contributes to stronger storms is important.  Australia’s support for island communities recovering from disasters is welcomed. However, we need you to do more to address the warming trend that is making these storms more dangerous than ever.

In the wake of monster cyclones, Pacific islanders went without food to keep their children nourished and walked kilometers to find water for their families. We faced escalated family violence.  We understand that this is just the beginning.

It is clear what must be done to tackle climate change.  We must all take immediate steps to reduce greenhouse gas emissions and move toward a zero emissions economy. The world has a limited carbon budget – the amount of carbon that can be released into the atmosphere before global temperatures exceed 1.5°C above the pre-industrial average.

Going beyond this threshold will threaten the very existence of Pacific nations such as Kiribati, Tuvalu and the Marshall Islands.

To keep global warming to 1.5°C the vast majority of the world’s coal reserves must remain in the ground.  This is not a matter of political debate, but of physics.  Heeding these facts, Pacific leaders have called for an urgent international moratorium on the development and expansion of fossil fuel-extracting industries, particularly new coal mines

Australia is already the world’s largest exporter of coal. Disturbingly, your government is planning to dramatically increase coal exports, with public subsidies and taxpayer-funded infrastructure for new mining ventures.

Just yesterday (Thursday), the Australian government announced it was considering subsidising new coal-fired power plants. This is deeply disappointing, and against the tide of global action to tackle climate change.

Australia’s current targets to reduce emissions, pledged under the 2015 Paris Agreement, are woefully inadequate.  They are in no way consistent with keeping the global temperature rise below 1.5°C.  The Marshall Islands ambassador for climate change Tony de Brum has explained that if the rest of the world set similar targets, his country, and other low-lying Pacific islands, would disappear.

Australia is not on track to meet even its inadequate targets.  Building new coal power stations will make matters worse, by locking in emissions for decades.

This year, Fiji is President of the global climate negotiations.  Fiji and other Pacific island governments are demanding that polluting nations reduce emissions, consistent with keeping temperature rise below 1.5°C.

It is time for Australia to accept the scale of action required to tackle climate change.  We must all move away from fossil fuels, and immediately transition to renewable energy. Together, we must support climate action around the globe.

Pacific islanders are not drowning.  We are fighting for our future.  As our friend and near neighbour, we expect you, and the Australian government, to do more. 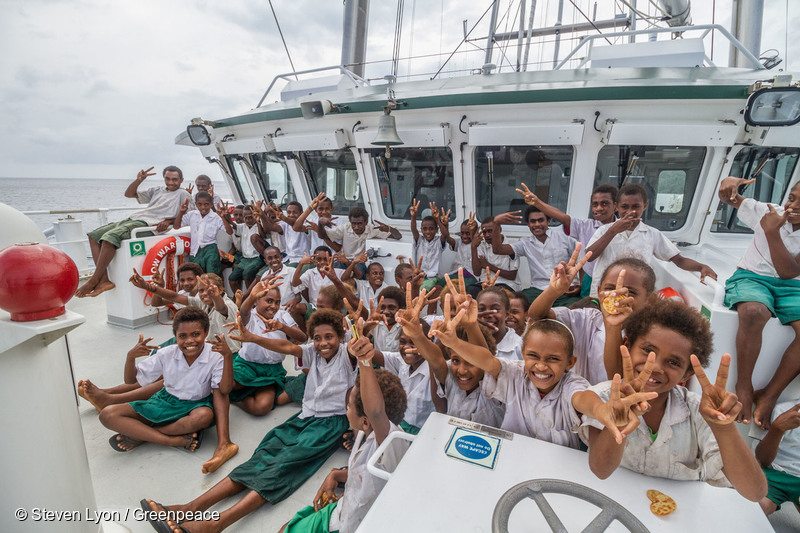 Children from Nambaranguit Primary School have a group photo at the front of Rainbow Warrior.