No Future in Fossil Fuels – Pacific Activists Call for Action

This morning, before the sun came up, while much of Bonn was sleeping, the Pacific Island Represent team laced up our winter shoes and headed out into the dark. We had never done anything like this before. And what we were about to see was also a first. 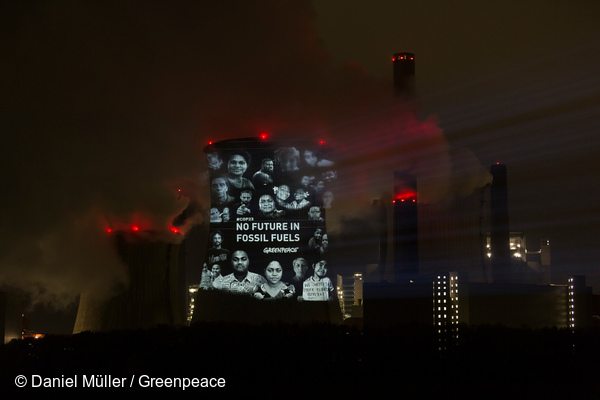 Nothing could have prepared us for those ginormous smoke stacks and man-made clouds of the carbon-emitting machine that is the Neurath coal-fired power plant.

Where we come from, the Fiji Islands, we do not have a fossil fuel industry. We have never looked into the face of what we are truly up against. Yet there we were, staring at a coal plant that emits more than twice the annual carbon of our entire nation!

Before the anger and sadness could set in, the Greenpeace technical team had worked their magic and lit up the sky! And we remembered why we were there.

Just before dawn, a projected patchwork of selfies and the message “No future in fossil fuels” hijacked the walls of the fossil fuel burning giant.

We were suddenly surrounded by the many many faces of the people who are standing with us to show world leaders that emissions do not respect national borders, and to tell them that we see straight through their time-wasting climate sweet-talk.

Why is Pacific Island Represent in Germany?

Pacific Island Represent made the long journey from Fiji to Germany to highlight that too many countries are disingenuous with their commitments to the Paris Agreement and its aim of keeping global warming below 1.5 degrees. Far too many countries are simultaneously taking actions at home that make that goal completely impossible.

Germany portrays itself as a leader in combatting climate change, and in some ways it is – but acts of environmental responsibility cannot be assessed in isolation.

Germany’s commitment to renewable energy is commendable, and while wind power has increased in recent years it does not undo the fact that dirty brown coal (arguably the worst fossil fuel of all) still powers much of the nation and its industry.

Every year the Neurath coal plant emits around 32 million tons of carbon. The whole nation of Fiji emits around 15 million tons. Worse still, Germany is continuing to build coal-fired power plants at a time when much of the world is turning away from the most climate-damaging fossil fuel in existence.

This is in complete contradiction to the fact that Germany has committed to reducing its enormous carbon footprint under the Paris Agreement.

Unfortunately, Germany isn’t the only one. The same criticisms can be made of many countries in attendance at COP23.

Including the Pacific’s close neighbour and supposed friend, Australia.

Australia has also signed the Paris Agreement, but is currently forecast to fall well short of its emission reduction targets. That’s before we even take into account the emissions from the proposed new Adani coal megamine. This coal mine alone would emit more than all 14 independent Pacific island states combined.

Another example is Norway. Even though they have some awesome local policies, including incentivising the purchase of hybrid and electric cars and setting a deadline for a ban on diesel and petrol vehicles, they have just opened up new oil fields in the Arctic for drilling. This is locking in massive future emissions that we just can not afford.

These are just a few of many nations playing a double game with the global climate negotiations process and continuing at home with business as usual.

Who are the Pacific’s real friends?

As Pacific Islanders, we are beginning to find this not only frustrating, but insulting.

Nations who expand their fossil fuel industries cannot claim to be friends of the Pacific in the fight for climate safety. They are knowingly putting our lives, our children’s lives, at risk.

Pacific Islanders have been pitted against fierce forces of nature since the beginning of time. But recently, the cyclones and tropical storms hitting the paradise region have been unprecedented in both ferocity and frequency. They are huge, unforgiving and getting worse.

Of course, the rest of the world is feeling this too, as extreme weather events have struck all corners of the world this year in a truly alarming sign of what’s coming. Natural disasters that were only recently considered ‘once in a lifetime’ are becoming the new normal.

As terrifying as extreme weather events are, they may not even be the biggest threat to the Pacific, with low-lying islands at serious risk of being swallowed under rising seas.

There is still hope for the Pacific and other vulnerable parts of the world. We want to remind everyone of that. But only if global leaders take the commitments they have made seriously. The future of entire nations depends on it.