It’s less land than sea, really. Just over 800 square kilometres of earth, smaller than many Australian national parks, but its coral atolls span a staggering 3.5 million sq km of the central Pacific Ocean. But this beautiful place is now a magnet for huge commercial fishing operators from Europe, Asia and America.

One of the most beautiful places on earth is a land that time forgot, Kiribati (pronounced ‘Kiri-bas’). 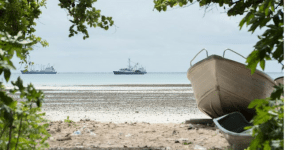 It’s less land than sea, really. Just over 800 square kilometres of earth, smaller than many Australian national parks, but its coral atolls span a staggering 3.5 million sq km of the central Pacific Ocean.

Deep turquoise lagoons barely poke out above sea level, which are home to some of the most productive fish populations the planet has left, especially tuna.

A FUTURE ON THE LINE 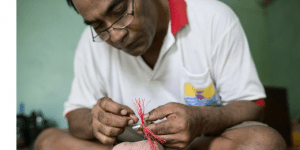 But here’s the tragedy. This beautiful place is now a magnet for huge commercial fishing operators from Europe, Asia and America. And they’re not only removing fish far faster than oceans can replenish them – they’re literally taking the food out of villagers’ mouths.

Locals such as Katarek, a retired fisherman from Kiribati, are struggling to survive and provide for their families on the meagre catch that’s left in the wake of the big commercial boats: “Now we’re not the only fishermen in our ocean. Now, we cannot really survive.” 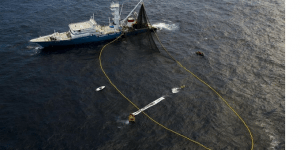 For people like Katarek, it’s getting harder and harder to find fish. Just five years ago, local people would go out in the morning, spend an hour or two fishing, and come back with enough to feed our families. Now it can take five to six hours for fishermen to catch enough to barely get by.

Two monster boats, Albatun Tres and Albacora Uno, can catch more in three combined fishing trips than Kiribati’s entire local fleet catches in a year. Add to that illegal fishing in protected areas, or in breach of licence conditions, and local fishermen are often left with next to nothing.

SHUT OUT FROM PROFITS 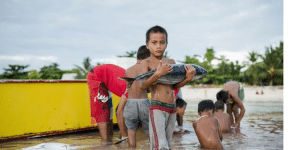 Although around 60% of the world’s supply of tuna comes from the Pacific, Kiribati’s fishermen are struggling to survive.On average a quarter of a million tonnes of tuna caught in Kiribati waters each year is shipped off to canneries and fresh sashimi markets around the world, leaving insufficient fish stocks to sustain local communities.

And Pacific nations like Kiribati are also being shut out of most of the profits. Although the tuna fishing industry in the Pacific is worth over US$7 billion, less than 10% of this goes to local economies. That’s outrageous exploitation considering that more than $2 billion of tuna was caught in Kiribati waters alone in the past two years.

WHAT CAN WE DO? 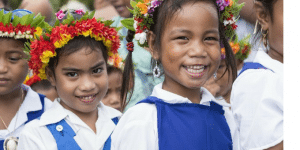 Our mission is to change the way commercial fishing is done, right here in the Pacific. And we’ll win too, just as we’ve done before. With your help, we will stay the course until our oceans, and the people who depend on them, have a future again.

We’re working closely with members of Kiribati and all Pacific Island countries to help put an end to exploitative overfishing, in favour of fishing that’s more ecologically sustainable, socially responsible and locally-driven.

Together, our campaign could:

Fund a range of joint operations with Pacific governments to enforce the existing rules being flouted by corrupt commercial operators;

Fund modern surveillance technology to catch rule-breakers in the act, so they can be brought to justice;

Train, support and empower local organisers and allies to put pressure on key politicians to help stop illegal operators and corrupt officials from depending on foreign owned operators; and

Fund scientific research, which we’ll use to help mobilise a truly global campaign with our movement worldwide.

Together, we can not only save our Pacific Oceans and the last fish stocks left on the planet, but help Pacific Islanders to protect their homes and way of life.