NSW solar policies: how do they stack up?

The parties of NSW have identified climate change and cost-of-living are key issues, and renewable energy allows them to address both of these. But with the major parties all racing to announce their policies to boost uptake of rooftop solar, how do their policies stack up?

Cash handouts, interest-free loans and bold plans to electrify all government buildings. With NSW voters set to go to the polls in just over a month, the election campaign is getting to the business stage.

Energy policy is set to be a key battleground, and it’s no surprise the major parties chose Western Sydney to make their pitches to families crying out for relief on their electricity bills and meaningful action to protect the climate.

The Labor opposition got the party started on Saturday by unveiling an ambitious policy to extend the renewable revolution to a further 500,000 homes.

Labor is offering households up to $2,200 to purchase solar panels, eventually taking the total number of NSW homes with rooftop solar past the one-million mark. Eligible homes must be owner-occupied and the scheme is restricted to families on a combined income of no more than $180,000 per year.

The move will help ease the pressure on New South Wales’ ageing and unreliable coal-fired generators, while also lowering pollution and power prices. 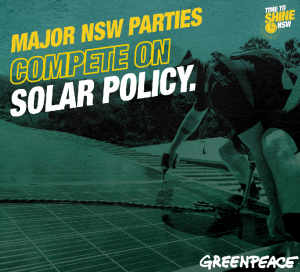 Opposition Leader Michael Daley said the scheme would save families up to $1000 a year.

The Liberals responded the following next day, announcing a policy to offer interest-free loans to families to install rooftop solar and battery storage systems.

While Labor’s policy is a strong start, offering grants rather than loans to a greater number of households, there is still room for improvement, such as the need to include renters in their plans.

Meanwhile Gladys Berejiklian’s Liberals need to do more. Coming on the back of 8 years of climate inaction from the NSW Liberals, this policy is too little, too late.

There are already commercial operators offering low or no-interest loans for solar installation, so it’s debatable that this policy adds much value without a suite of other targeted measures.

At the same time, it’s certainly a step in the right direction that all the parties are at least recognising the need to increase solar uptake, even if ambition levels are variable.

Unsurprisingly, the Greens have an even more ambitious policy than both their major rivals, yesterday revealing a bold plan to make solar and battery storage mandatory at all new homes in New South Wales.

All proposals will help reduce the pressure on New South Wales’ ageing and unreliable coal fleet and help families deal with high power prices. However, none of the policies do enough to offer clean energy solutions to people unable to access solar, like apartment dwellers.

People who rent deserve to be able to access clean and cheap energy too. That’s why Greenpeace is calling on the next New South Wales government to introduce a solar rebate to help families that are renting, to access solar panels – or help those who already have solar to install battery storage.

With this year’s poll set to be the “the climate election” it’s critical that the next New South Wales government outline how it will ensure the state’s economy is powered by affordable and reliable technology far into the future, by outlining plans for significant increases in larger wind and solar farms.

Climate advocacy groups including Greenpeace, the Nature Conservation Council of NSW, and Solar Citizens, are calling on all parties contesting the NSW election to ensure:

Take action to call on NSW leaders to step up for the climate this election.