We interviewed singer Novo Amor about his latest music video

We chatted to Welsh singer Novo Amor about his latest music video, which highlights the problem of plastic in our oceans.

An underwater diver drifts freely, gliding past majestic sea turtles, huge manta rays and schools of shimmering fish… and an enormous whale made from plastic waste?

Have you seen the incredibly moving music video for Novo Amor’s new song, Birthplace? The video is a haunting exploration of the problem of plastic waste, and the two directors of the film, Sil and Jorik, and Novo Amor himself see it as a way to raise awareness of how plastic is a threat, not only to marine life, but to all of us.


Plastic threatens marine life, with research finding up to 90% of seabirds and half of all sea turtles have plastic in their bellies. These sea critters mistake plastic for food, with dire consequences. Earlier this year, a whale washed up on a beach in Thailand with 80 plastic bags in its stomach, which made it so sick it couldn’t hunt for real food.

The music video for Birthplace explores the issue of plastic pollution, and humanity’s complicated relationship with plastic. It’s also an impressive feat of cinematography and film direction, featuring a life-size humpback whale sculpture made of plastic trash alongside renowned free-diver, Michael Board. Check out the ‘making of’ video here.

We interviewed Novo Amor and Sil and Jorik to uncover the motivation behind the video, the challenges of filming a free-diver and a life-size sculptural whale on the sea floor, and how we can all play a part in reducing plastic waste in our oceans.

Greenpeace: What sparked the inspiration for the song, and for the music video?
Novo Amor: Briefly put, the song is about living in the past, being enthralled by a memory, place or period of your life. The song is about growing up, and realising that you’re better off letting go of these things.

I’m pretty sure that we’re all influenced by our surroundings and circumstances, whether we know it or not. I grew up in Wales, but it’s hard to pinpoint which part of my sound has emanated from my upbringing. Being surrounded by nature from a young age maybe played a role in my love of natural recording and mellow music.

Sil & Jorik, music video directors: Once every while we come across an image or a snippet of news that really hits us like a dagger to our hearts. In the case of Birthplace it was a video of ocean creatures struggling with plastic that we humans produce. Feeling powerless against such injustice we desperately explored ways to speak out against this global environmental crisis.

Greenpeace: Novo Amor, are there common themes you see running through your songwriting?
NA: Yes. A lot of my music has been described as melancholy, which I guess it is, to an extent. I think there are a lot of masked cliches in my music, songs about breakups, unrequited love, heartache and such, but the lyrical ambiguity keeps it open to listener interpretation. The common theme running through my to-be-released debut album leans more towards celebration and a restfulness with growing up.

Greenpeace: Sil and Jorik, tell me about what it was like filming the video.
S & J: As directors the biggest challenge was communication. Filming underwater is very different from a normal film set, where you can say to your actor or cinematographer, ‘look up’ or ‘go slower’. When you have four divers steering the whale at 10m depth and an actor who is practically blind underwater it can be hard to get everyone in the right place at the right moment. 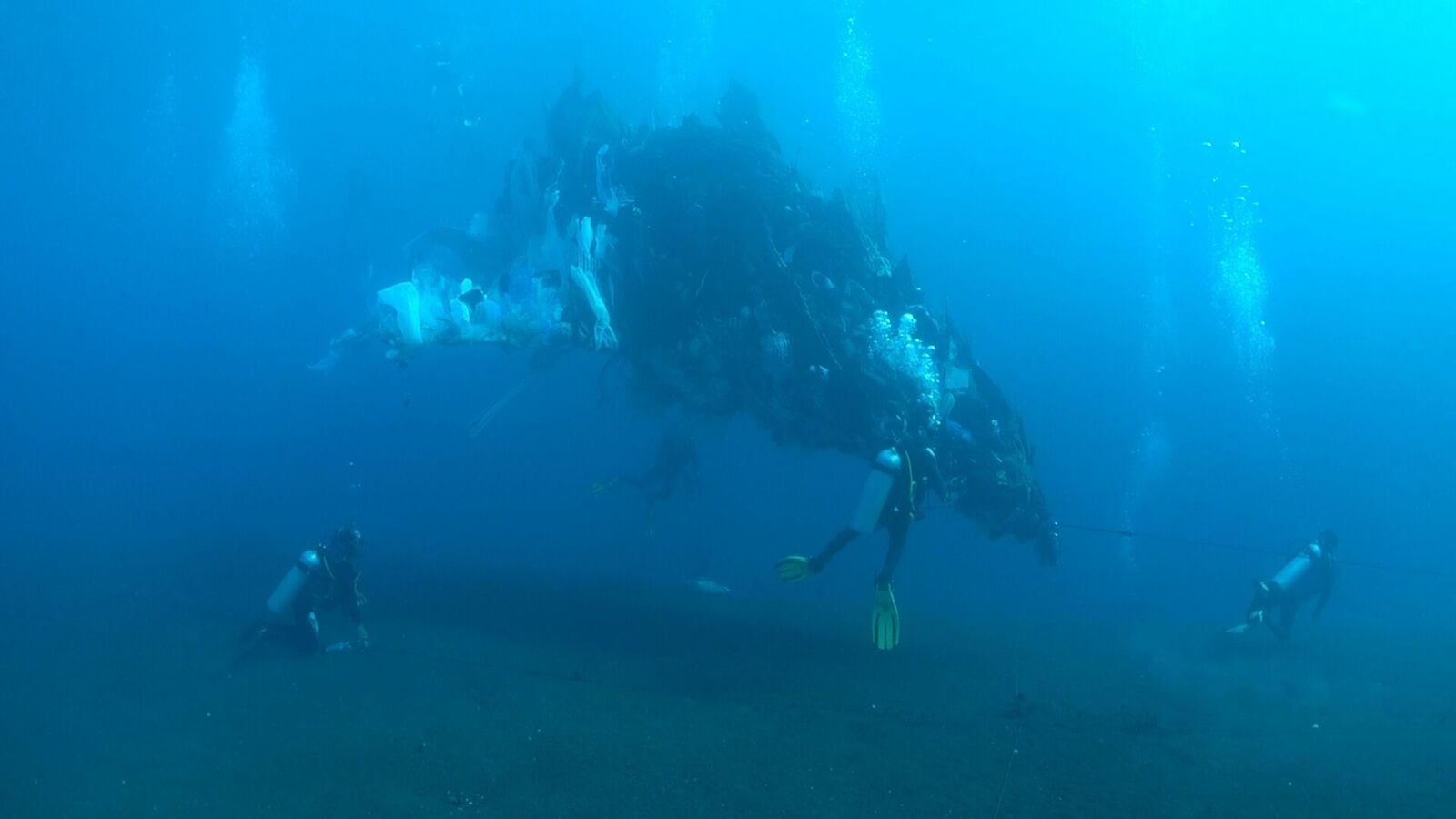 Encountering 4-meter manta rays and turtles was definitely the most magical experience of the shoot. Coming eye to eye with these phenomenal creatures that are so calm and gracious was a truly humbling and unforgettable experience.

For the second half of the video, we wanted to film a life-less ocean where the plastic whale was the only ‘living’ creature left, but there was a funny duo of Longfin Batfish that decided to photobomb as many shots as they could. When the pair tried to eat some of the whale’s plastic, we realized that obviously these fish don’t see the difference between what is nutritious and what is dangerously harmful to them. They will just eat whatever they encounter. Luckily the pieces of plastic on our whale were too large and tightly attached for the fish to eat, and we took the whale out of the ocean once we’d finished the shoot.

Greenpeace: Has the process of shooting this video changed the way you feel about plastic pollution?
S & J: Making the video was like a deep meditation on the subject of plastic pollution, and we learned some things ourselves as well. We were already shopping consciously, bringing our own bags, carrying our own water bottles, but we now carry our own utensils in our bags everywhere. We also became much more aware of how waste and plastics are disposed of and how little we actually recycle. With this newly learned knowledge we now try to bring awareness to people around us and encourage them to become involved too, in solving this massive problem.

Greenpeace: How can people help with the issue of plastic waste in the oceans?
NA: It’s the governments and big corporations that have made it hard for us to live without single-use plastics, such as food packaging, but we are all responsible. I think it’s more important to try to avoid using single-use plastics than assume that they’ll get recycled once thrown away.

We’ve passed the point of being able to do much about most of the plastic already present in the ocean. The best thing that people can do is just to try to not make the problem worse. Stop using pointless plastic straws and disposable cutlery, buy foods without plastic packaging. If you own a take-away restaurant, supply wooden cutlery etc. for your customers.

Art and music can be an important way of making change in the world. Recently, my childhood primary school got together to build a giant jellyfish made from used plastic bottles. The motivation behind this was for the children to learn about environmental issues in a creative way. Using creativity like this is kinaesthetic learning, which for children can be a lot more interesting than reading facts from a book. The school showed the kids the Birthplace video and the making-of documentary; teaching tools to engage them in the topic in a more stimulating, digestible way.

This beautiful collaboration between Novo Amor and the two directors has been around the world and back already, garnering media attention from Spain to the Netherlands to Indonesia. We love its message, the dreamy tune and the sensitive way Novo Amor and the directors of Birthplace explore a challenging topic. Will you join them in finding solutions for our plastic problem? We need everyone to do their bit to stop plastic pollution ending up in our oceans, and we need to hold corporations accountable for the plastic mess they’ve made. Check out some easy actions you can take here.

Birthplace is lifted from Novo Amor’s debut album of the same name, which is released on October 19th via AllPoints.