AGL is, by far, Australia’s largest emitter of harmful greenhouse gas emissions. In fact,  Coal-faced found that AGL is responsible for double the carbon emissions of Australia’s second-biggest electricity generator, and more than BHP, Rio, Glencore, and Qantas combined.

AGL’s dirty coal-burning power stations are responsible for a whopping 8 per cent of total national emissions, which is equivalent to 9 million cars on the road. Every year, AGL’s planet-wrecking activities release 42 million tonnes of dangerous emissions into our atmosphere. 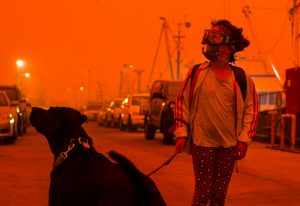 Keeping AGL’s coal-burning power stations running to the end of their life will result in 746 million additional tonnes of carbon emissions, according to the new report. This is the same amount of greenhouse gases produced by 162 million cars on the road in one year.

As a nation on the front lines of climate change, can we really afford to let AGL wreck the planet until 2048? Not only will this derail our international climate commitments, it will also continue to kill us. Coal-faced estimates that an additional 3,500 deaths will be attributed to coal-burning power stations between 2018 and 2042.

Despite AGL’s recent $2.7 billion loss, the company is desperately clinging to its ageing, unreliable coal assets. The recent demerger shows that the company is fraught with internal instability, but instead of transitioning into the lucrative renewable energy market, AGL is spending billions on maintaining its near-stranded coal assets and cleaning up preventable environmental messes. It’s also desperate to keep its climate-wrecking practices out of the public eye.

As more fossil-dependent companies around the world make the smart transition away from coal, we can begin to see cracks forming on the laggards who steadfastly remain in the dying industry.

Coal-faced reveals that renewable energy technologies can be implemented at scale to replace AGL’s ageing coal-burning power stations, as has happened elsewhere around the world. In the UK in 1990, coal accounted for 75 per cent of all of its electricity generation — now, it’s just 2 per cent. Closer to home, New Zealand is set to reach 100 per cent renewable energy by 2030.

Our allies, businesses, and the global market is shifting at lightning speed towards renewable energy. Australia’s third-largest emitter, Stanwell, recently announced its plans to abandon coal and pivot towards a future in renewable energy. Plus, AGL’s main rival, Energy Australia, has brought forward the closure of its Yallourn coal-burning power station in Victoria’s Latrobe Valley to 2028. Instead of inevitably becoming a stranded asset, Yallourn will be replaced by  one of the world’s largest batteries..

If Australia has any chance of reaching net-zero emissions by 2035, energy providers like AGL must close their polluting coal fleets and rapidly shift to renewable energy by 2030.