Your annual ecology lesson. Learn about the wonders of the iron-shelled sea snails that dwell in volcanic ocean regions. 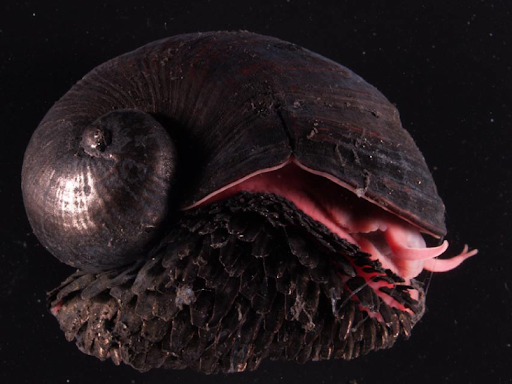 Have you heard of the scaled, sea-dwellers encased in a metal shell?

That might sound like the description of a Jurassic-era ocean predator, but it’s actually that of the scaly-foot gastropod!

These sea snails reside near underwater heat vents that are typically found around volcanically active sites, although the scaly-foot gastropods themselves are endemic to three regions in the Indo-Pacific Ocean. Their shell is composed of iron-sulphides, as too are the scales along their ‘foot’.

Cute nicknames for this critter include ‘the pangolin of the sea’ and ‘black knights’, the former due to them being armoured like a Mediaeval fighter. Not all of these gastropods are black, with the colours of their iron shells differing depending on the location of their habitat.

These snails don’t always don their shiny armour. In one of the locations where these snails are found, the hydrothermal vents don’t exhume iron-sulphide compounds, and the snails don’t have iron in their shells either.

This has led scientists to hypothesise that somehow, these sea snails absorb the iron compounds into their own bodies to harden their shells and scales. Not only that, but their iron shells can be magnetic. They are also capable of living in temperatures up to 400 degrees celsius, and feed off bacteria which inhabit their stomachs!