Matilda May Pilacapio: a true inspiration

Here in the Greenpeace Port Morseby compound, amongst the mango trees, is one of the more seasoned and inspiring activists I’ve ever met. Matilda May Pilacapio.

Matilda has been an activist and campaigner for over 30 years. She was duly elected the first female provincial member of assembly for the southern region of PNG. As a dedicated environmentalist and the Minister for Agriculture, Forestry and Fisheries she was a force to be reckoned with.

As a feisty leader opposing the land grabs by companies for palm oil plantations Matilda was forced out of government after palm oil companies waged a campaign against her re-election.

Although she didn’t win the re-election this was the true birth of activism for Matilda. 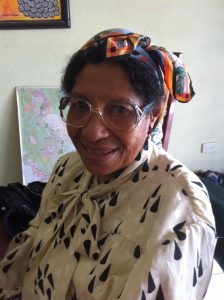 In 2007 Matilda visited Port Morseby for a short trip. When she got here a local NGO showed her a document from customary landowners in the Milne Bay Province opposing their land being grabbed for palm oil. The company against the landowners was a Malaysian/Australian logging company wanting the stripe ebony and black ebony wood from the island of Woodlark.

“It’s so pristine my daughter and son and grandchildren live there. This campaign was so close to my heart because their father is a Woodlark Islander and a landowner where the forests were under threat from the palm oil.”

Matilda wasn’t sure how to start a campaign so she went to the Greenpeace in Port Morseby to seek help and assistance and hasn’t looked back. With support from Greenpeace Matilda won her campaign. “The last thing I did to put the lid on the pot was to have an interview with the ABC where I talked my heart out. When I went out on air it went all over the Pacific and that was when the company withdrew.”

Matilda is still fervently fighting for a better world.  This time customary landowners are losing their forests through the unprecedented explosion of government granted Special Agricultural and Business Leases (SABLs).

5.2 million hectares of customary land has been released under these new laws. Because of this huge explosion in land grabs and pressure from NGO’s there is now a Commission of Inquiry taking place. Our ship, the Esperanza, is heading to Port Moresby where Matilda is in full fight mode. Each day she is pounding the pavement talking to parliamentarians, diplomats, schools and locals and inviting them to visit the Esperanza and hear about our campaign.
And when she’s won this what next? Rumour has a national parliamentarian is involved in shark finning and Matilda is not going to let him get away with it.

Find out more about our work in PNG