The first of these toy companies to announce more substantive action is Lego, who have released a new statement on this issue today.

We have asked all of these toy companies to take three simple steps:

1.     Stop buying paper products from Asia Pulp and Paper – the worst forest offender in Indonesia – and any companies connected to APP.

2.     Don’t buy from Asia Pulp and Paper until the company makes real changes on the ground that protect Indonesian rainforests, biodiversity and respect the rights of people living in these forests.

3.     Become leaders in their industry in the use of sustainable forest products for all their toys and packaging, by immediately implementing new procurement policies aimed to cover the purchase of all pulp and paper products. 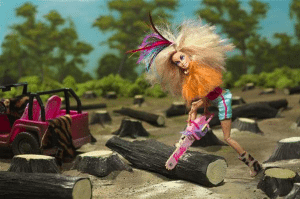 Barbie and Mattel should take a leaf out of Lego&#039;s policy

Lego have announced that they intend to not buy packaging from companies involved in deforestation and have confirmed that this means APP will not be able to supply the company. The toy company outlined a three-step plan to reduce the impact of its packaging on forests: firstly, to reduce total packaging; secondly, to maximize the use of recycled material; and thirdly to also ensure that all fibre, including any virgin fibre used, comes from Forest Stewardship Council (FSC) certified sources.

The other companies named so far in our campaign, including Hasbro, which makes Transformers, and Disney have so far failed to commit to clear action to remove rainforest destruction from their packaging. They have faced criticism for their weak response to revelations linking them to the destroyed rainforest home of species such as the Sumatran tiger. Here is where they stand currently:

It looks like Barbie has admitted she’s got a deforestation habit, but she isn’t out of the woods yet. Mattel’s latest statement on how it will deal with packaging coming from rainforest destruction urgently needs details and timelines, both for implementing a policy and for ending their purchases from APP.  We are calling on Mattel to step up and show real leadership on this issue. And we will keep calling for this – literally. Join us in picking up the phone and giving Mattel a call about this issue. (Ken already has!)

Hasbro has said that they are instructing their suppliers to immediately stop using APP, which is a good first step. But if they were really serious about completely removing rainforest destruction from their products, they would implement a comprehensive policy to fix the problem. Instead they’re falling back on a weak sustainability announcement made in 2010,which we’ve shown doesn’t work to prevent rainforest destruction ending up in their supply chains, and therefore in their products. Until we see a real, time-bound and comprehensive policy, famous toys like Transformers and the rest of Hasbro’s products still risk being wrapped in rainforest destruction.

Perhaps surprisingly, Disney has not responded at all about their deforestation habit. They’ve made no public claims about supplies from APP or policy improvements to solve the urgent problem they have to deal with. Which leads us to wonder: when will Mickey and Minnie sort this out?