Over the weekend Kumi Naidoo, Head of Greenpeace International, was arrested for taking direct action to stop drilling in the Arctic.

For 90 minutes Kumi and fellow activist Ulvar Arnkvaern were on the Leiv Eiriksson oil rig.  Soaking wet Kumi demanded that Cairn Energy immediately halt drilling operations and leave the Arctic. He also sought a meeting with the Master of the rig so he could present the names of 50,000 people from across the world who have emailed Cairn to demand they publish the rig’s secret oil spill response plan. 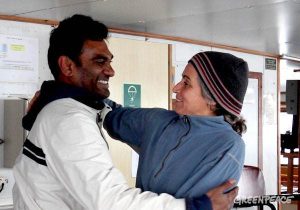 Australian and Captain of  the Esperanza, Madeleine Habib shares with us what it was like onboard in the hours leading up to the latest Arctic action.

Finally, we had Kumi Naidoo on board Esperanza.

There had been such a series of obstacles to overcome; we were beginning to believe that we would never manage to get Kumi on to the ship in the remote waters off the coast of Greenland.

I turned Esperanza & we headed back out into Davis Straits where the rig Leiv Eiriksson continued exploratory drilling for Arctic Oil.

It was a long night briefing Kumi & his action partner, Ulvar. Normally action preparations are spread over a few days and the team has time to work out a plan together. In this case, we had to speed the process up. In addition, Kumi still had to carry on his “day job”, as he described it. He was filming pieces to camera for a communications department meeting and an industry heads meeting while we kitted him out with a dry suit, gloves and hard hat.

After a few practice climbs and a thorough explanation of the plan Kumi and Ulvar got a few hours of rest. 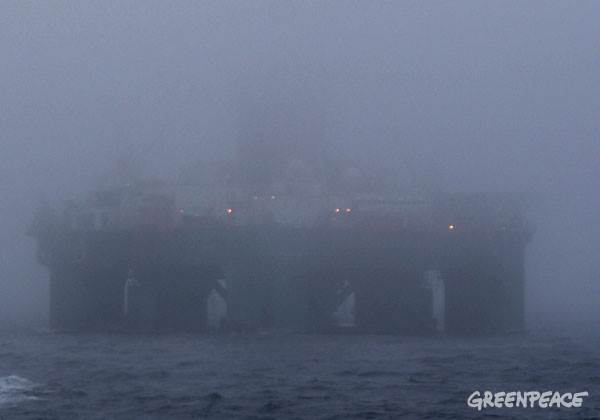 It was a calm night but we were plagued by fog which is prevalent at this time of year. Whenever the visibility decreases we have to reduce speed particularly in polar regions where ice is ever present. During the night we passed a few icebergs & fields of “growlers”. Growlers are particularly hazardous to navigation as these eroded small bergs have smooth surfaces undetectable by radar & difficult to see by eye.

Although it was a long night it never got dark. We are at 65 degrees north and as it’s only a few days short of the summer solstice this really is the land of the midnight sun.

By early morning we were one nautical mile from the rig. Leiv Eiriksson produced a bold echo on the radar, but the fog was so thick the rig was invisible to us as we peered out of the bridge windows. I didn’t want to send the team off without being able to see them. So we waited & waited… variously cursing & pleading with the fog to dissipate.

Everyone was ready for deployment, sweating in their Arctic clothing. Then suddenly the fog lifted and there was the rig in all it’s monstrous glory. I called for the boat to be launched and, like clockwork the team took Kumi to the rig.

For the crew of Esperanza it was an honour and an inspiration to share this experience with Kumi. His willingness to partake in this action & the legal consequences that he faces assures us that we are part of something big here. This will be the issue that defines our times. If we can stop drilling for Arctic Oil then we have a chance to face up to climate change and the role we have to play in preserving our delicate planet.

The rest of the story is best described in Kumi’s own words.