Kiribati : the frontline of Climate Change 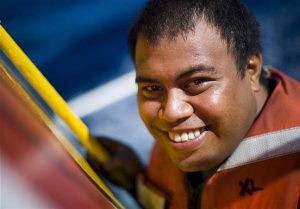 Officially known as the Republic of Kiribati, it is an island nation located in the central tropical Pacific Ocean. It is composed of 32 atolls and one raised coral island, dispersed over 3.5 million square kilometers, straddling the equator, and bordering the International Date Line at its easternmost point. It is also one of the most vulnerable nations on the planet in terms of the effects of climate change.

Four years after leaving my birthplace, I stepped off flight FJ231 at Tarawa airport to bear witness to the immediate impacts of climate change on my people in Kiribati.

Ana Jitoko, my fellow Greenpeace Activist from Fiji and I arrived on Wednesday morning and we were greeted with no internet and hardly any water. We did not have to go to a five star bungalow on an exclusive island to experience living on top of the ocean. We sat on our doorstep and dangled our legs straight into seawater which lapped up outside our doorstep in Bikenikora village.

For many Pacific Island Countries coral reefs and fisheries are our primary source of food. Just as it is in Kiribati, these too are becoming threatened. Our islands are all vulnerable to warming oceans, coral bleaching and the emerging threat of ocean acidification. In addition, whales and dolphins strand themselves in high temperatures and the great whales risk losing their feeding grounds in the Southern Ocean around Antarctica because of the melting and collapse of ice shelves.

Yesterday I stood at the highest point in Eita, Kiribati, which is only three meters above sea level, I did not feel guilty about my anger. I stand with my Fijian colleague Ana, trying to hold back overwhelming emotions as I come to terms with this fact.

Seeing my home, culture and traditions at the forefront of climate change is as stirring and highly charged as taking action against illegal fishing vessels or blockading coal ships leaving Mackay.

Media reports are suggesting the Conference will have the representation of 19 countries. Most of them major emitters of greenhouse gases, which are the cause of rising sea-levels in the Pacific. 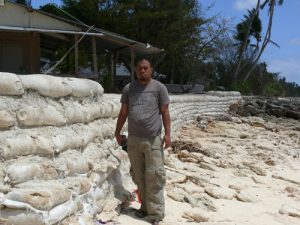 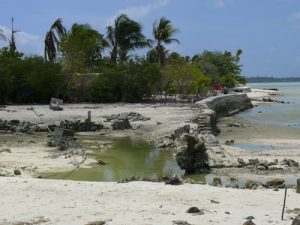 What we need this three day political talk-fest to do is learn from the missed opportunity in Copenhagan and submit to a Fair, Ambitious and (legally) Binding (FAB) agreement to avert catastrophic climate change. The urgency of the need for global commitments to keeping global temperature rise maintained at 1.5°C or less, to “keep us alive” cannot be understated as I witness for myself here in my motherland.

To help small island states like Kiribati we also need the protection from our bigger Melanesian brothers to ensure that there is a decision establishing a framework for protecting tropical forests which protect biodiversity and fellow indigenous peoples’ rights.

For our food security we need the Western Pacific Fisheries Commission, the regulatory body overseeing the management of tuna fisheries in the Pacific, this December to ensure that four pockets of international waters that flank more than a dozen Pacific Island countries are turned into marine reserves. This will enable them to act as a completely essential buffer against climate change.

Greenpeace will not give up. We have vowed to continue to build a powerful global social movement to make politicians accountable for climate action, and to stand in solidarity with Pacific communities who are on the frontline of climate change impacts.

For more info visit Climate Change and the Pacific