Greenpeace is working towards creating a green and peaceful world for the children of today and tomorrow, so we love receiving letters from kids who are passionate about the work we do.

Greenpeace is working towards creating a green and peaceful world for the children of today and tomorrow, so we love receiving letters from kids who are passionate about the work we do.

Recently, we received some beautiful illustrations from 8-year-old Samuel Kelso, advocating for saving trees and a switch from fossil fuels to renewable energy. With the pictures came an impassioned letter from Samuel about the effects of deforestation and global warming.

We loved it so much, we thought we’d share it with all our supporters! Here’s what Samuel sent us: 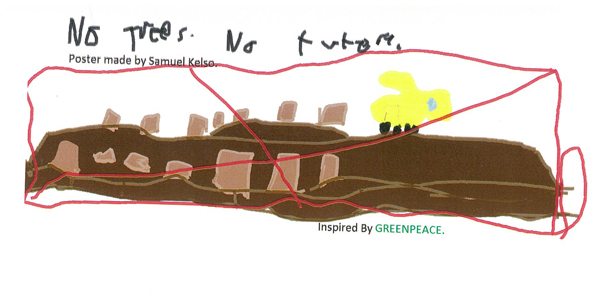 No trees. No future. 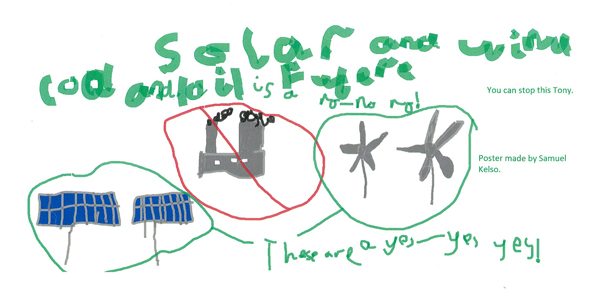 Solar and wind – future. Coal and oil is a no-no no!

I would love it if you could put my pictures on your blog or website! Also we really appreciate your goals. Now my point on “No trees no future” is that if we destroy about half of the Amazon rainforest we would also destroy the habitat of 45% of all known animal species! And it’s not just that! That also means we would have removed most of the trees. Making the world much more vulnerable to global warming. Guess what? Thermohaline circulation shutdown! Side effect include. Desert oceans, Coastal wastelands, Rising Sea levels, Poison air and reduced ozone layer. And where well on the way to this happening. Also we can stop this now.

PS:  I have ideas for a heat power plant which uses the heat from the Earth’s core to power a turbine which conducts electricity! The same can be done with the energy produced as the Earth’s crust moves.

PPPS: I have an idea for a Frozen advertisement to get young girls to join the movement “Save the Arctic”.

Greenpeace is working to make the world a better place for the children of the present and the future. The aim of this blog is to give children a voice in the struggle for a greener planet – it’s their world too. If you’d like to submit something to Kids Care, send us a message at [email protected]