Johnson and Johnson: the path to ‘No More Tears’ in Indonesian rainforests 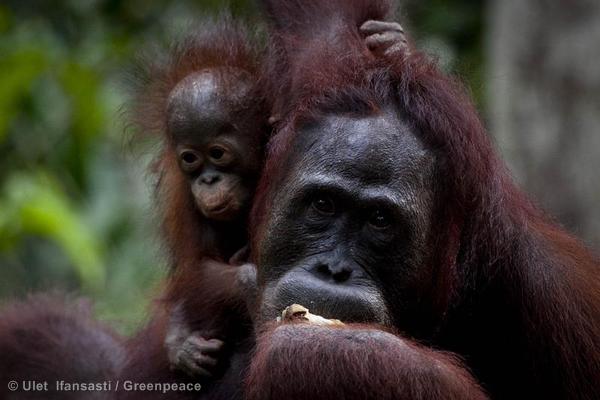 It’s frustrating to think about the link between forest destruction and that bright yellow shampoo that miraculously allowed parents to wash their babies hair without igniting a burning-eyes meltdown. While human babies splashed around on their little tubs, baby orangutans cried for their lost forests and families.

Well, that’s about to stop. 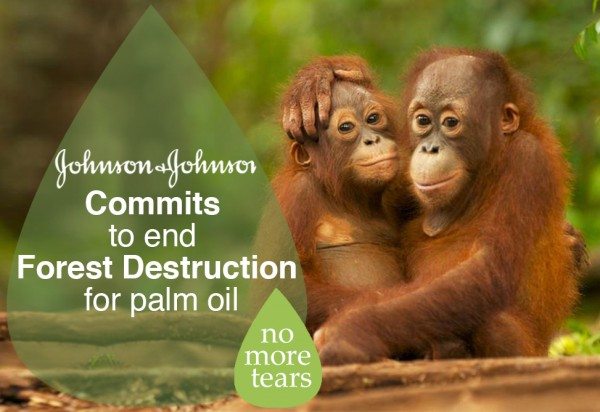 After months of negotiations, today Johnson & Johnson announced a commitment to eliminate forest destruction from its palm oil supply chains. It includes principles and criteria to stop deforestation, end social conflict, and promote local smallholders that must be obeyed by J&J’s suppliers from today. Otherwise, at least on paper, they face the risk of losing the company’s business.

But while this is very positive news and takes us one step closer to ending deforestation, it still doesn’t guarantee “no more tears” for the communities and biodiversity that live and depend on the Indonesia forests.

Eliminating forest destruction and social exploitation for palm oil depend on the full implementation of No Deforestation policies that have been announced in the last few months by Johnson & Johnson, Procter & Gamble, Colgate-Palmolive, L’oreal, Unilever, and many others. And this trend extends beyond companies that source palm oil for products. It includes producers and traders like Wilmar and GAR.

The implementation of these policies will require a lot of work. Companies will need to develop systems to know where its suppliers are producing palm oil and monitor these areas for deforestation, social conflicts, forest fires, and other problems. 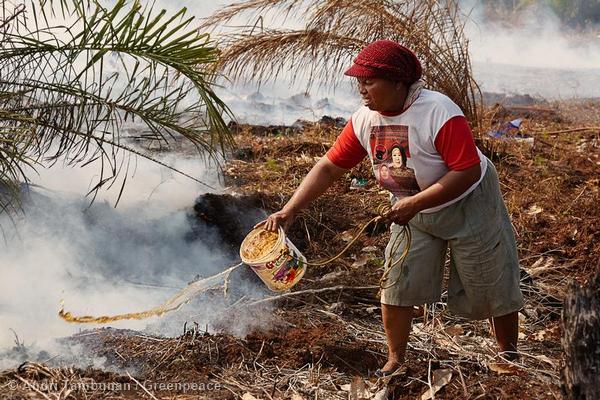 A villager tries to douse a smouldering peatland fire which burnt over 30 hectares of land at Selinsing Village, Riau. Those fires were linked to the clearance of peatland for palm oil.

At Greenpeace we believe in working together to create change, based on the best available science and strong evidence. So we went out there and did some of that work. We investigated suppliers that have been engaged in forest destruction. Our findings, released during the campaign on Procter & Gamble, link three palm oil companies — KLK, Musim Mas, and Asian Agri — to forest destruction and social conflict.

After J&J’s recent announcement, only Pepsico hasn’t moved out of the “non-forest friendly” category among the seven US based companies that have been named in Greenpeace’s Tiger Challenge. At the same time, all of them have received the results of our investigations.

It is now up to P&G, J&J, Colgate, General Mills, Mars, and Kellogg to live up to their policies and engage with the suppliers identified by Greenpeace and other NGOs. Ultimately, if they continue with their bad practices, contracts between these companies must to be canceled.

I know this might bring some tears to the eyes of those who stand to profit from the destruction of tiger and orangutan habitat. But it will pass. If they want to continue with their business, they will follow the path of producers and traders like GAR, Wilmar, and the members of the Palm Oil Innovation Group, who are working to end deforestation.

We will continue to keep our eyes open and work with the palm oil industry until the end of deforestation and social exploitation. When this happens, “no more tears” will finally apply to all babies, regardless of species.