Have you seen the news?  John West, Australia’s biggest tuna brand with over 40% of the market, has announced their complete transition to FAD-free tuna sourced from the Pacific (FADs are fish aggregating devices - which act like fish magnets, drawing in tuna and other marine life making them easier to find and scoop up in giant nets, but also resulting in a ten-fold increase in bycatch). They’ve met the agreement they made to Greenpeace - and to you - way back in 2012.  Congratulations - we’ve come along way.

When we started the tuna guide in Australia in 2010, some brands couldn’t tell us what ocean their tuna came from or even, scarily, what species it was.  Our consumer guide was popular, it told shoppers which tuna brands were starting to take sustainability seriously and which were treating the ocean like a bottomless resource. Because you were interested, they started to listen. It forced the brands to take a closer look at their business. But the mega corporations told us real change was impossible.

“I have to give some credit to Greenpeace here. They published the tuna ranking report which really raised the sustainability awareness of the various brands… we didn’t do as well as we’d hoped.” – Graham Dugdale, Executive Director, John West Australia.

The biggest sustainability issue was, and still is, FADs. Global seafood mega corporations use FADs for their fishing because the dwindling tuna are harder to find each year, and their business model is about a constant supply of cheap products – whatever the cost to the oceans.

We had to up the pressure.

So, three years and three months ago I stood outside John West’s headquarters in Melbourne negotiating with a police sergeant. Greenpeace activists in shark suits had climbed on their roof and were refusing to come down until we had a commitment to change their fishing policy. We’d been campaigning against them for six weeks (and talking for three years): spoofing their TV ads, putting up billboards, turning up at corporate events.  They were feeling the heat.  But as I told the sergeant, this was not about the activists on the roof, it was about the 50,000 Greenpeace supporters who had written to John West’s CEO demanding his company commit to fishing methods that would keep our oceans healthy.

The police officer was a fisherman who loved the ocean too. I think he agreed with me.  So we stayed until we got a commitment.

These wins are important. They take time and patience.  And we need to keep going with your support, because there’s a lot to do still.

This year, we launched a global campaign targeting the biggest tuna company in the world, Thai Union ( including its flagship brand in the UK, coincidentally also called John West (there’s actually no connection between the UK and Australian companies). Thai Union is wedded to destructive fishing practices including FADs, and unregulated longlining. Worse, across its seafood business it has been implicated time and again in serious cases of human rights and labour abuse.

Challenging the tuna industry is the front-line of a global struggle for the future of our oceans.  It’s about taking back control of the ecosystems that give us life.  Healthy oceans are vital – they help to regulate our climate and provide us with the air we breathe; they feed us and give livelihood to millions. John West’s decision to ban destructive practices is a big chapter in an even bigger story. 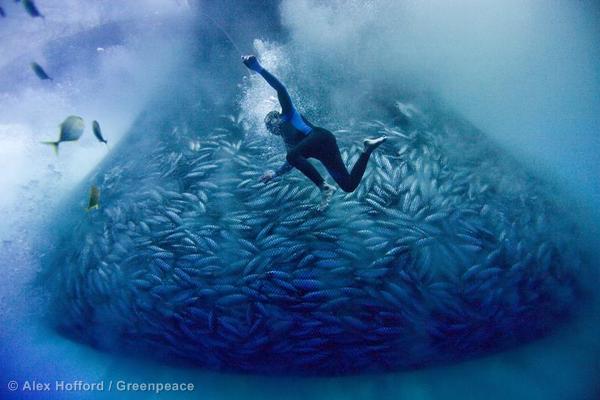