…or maybe it’s a Whark? Whatever you want to call it, today is International Whale Shark Day! But before you start running away screaming “Jawwwwws!” don’t be alarmed. With a face like a whale and a body like a shark, these seemingly frightening creatures are actually gentle giants.

Found in tropical oceans in areas like the Maldives, Philippines and Mexico they feed mainly on plankton and are by far the largest living non mammalian vertebrate. But despite being docile (they pose absolutely no threat to divers) they’re also unfortunately hunted for their highly prized fins and meat.

As a vulnerable species we need to protect the whale shark and their ocean home. Check out these facts about whale sharks… And then raise a glass of plankton and celebrate whale shark day!

The whale shark weighs on average 12 tonnes and can grow more than 14 metres in length. Despite its gigantic size, whale shark teeth are only 6mm long.

Each whale shark has a unique pattern, much like humans’ fingerprints. This allows researchers to run visual analytics to correctly identify and track each whale shark.

Whale sharks move slowly in the ocean. They swim 5km /hour but can dive up to 1,000 metres. However, whale sharks prefer to roam shallow seas with 50 metre depth. This makes them exceptionally vulnerable to ship collisions and fishing nets. 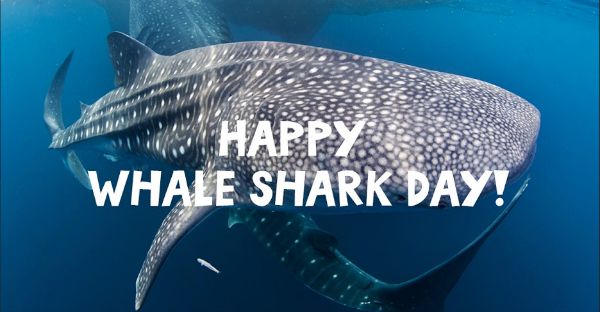 The International Union for Conservation of Nature (IUCN) Red List regards the species as one of the most vulnerable marine animals in the world. Indonesia, through its Ministry of Maritime Affairs and Fisheries, enacted a law for whale shark conservation. Unfortunately, law enforcement much like the whale sharks, has little to no teeth.

Like most sharks, whale sharks breed slowly which make them dangerously vulnerable to overfishing. Most of which, are contributed due to the world’s insatiable appetite towards shark fins.

Sumardi Ariansyah is an Oceans Campaigner in Indonesia, with Greenpeace Southeast Asia