Since the emergence of the civil use of nuclear power to meet the energy needs of growing populations, nuclear waste and how we dispose of it has become a big issue - especially for environmentalists.

Since the emergence of the civil use of nuclear power to meet the energy needs of growing populations, nuclear waste and how we dispose of it has become a big issue – especially for environmentalists.

For a period of time, some countries disposed of their nuclear waste by simply dumping it in the ocean. After going overboard, the waste was out of sight, and out of mind.

But not for long…

From 1978  Greenpeace activists around the world were engaged in campaigns against the dumping of nuclear waste into our planet’s oceans. And they were documenting it for the world to see.

In 1982, photographer Pierre Gleizes immortalised several moments as Greenpeace activists, aboard inflatable boats, protested against the dumping of barrels full of nuclear waste in the Atlantic Ocean by putting themselves between the toxic cargo and the ocean. 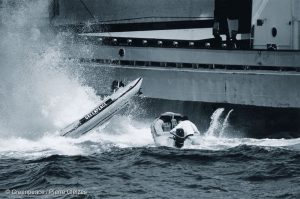 The epic moment a barrel of radioactive waste was dumped on top of a Greenpeace inflatable boarded by Willem Groenier, who suffered an injury as a result. 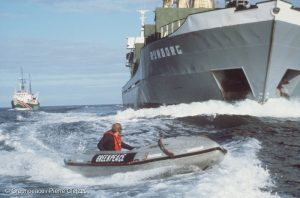 Greenpeace activist in front of the Rijnborg, the vessel dumping the waste in the Atlantic. The Greenpeace ship MV Sirius keeps guard in the background.

Then in 1993, the goal Greenpeace had been hoping for came to fruition, thanks to the work of our brave activists. A Greenpeace ship documented a Russian Navy vessel pumping radioactive waste into the Sea of Japan. The Greenpeace crew sent the evidence to international media outlets, and Japanese television stations came to the scene to record footage that was used around the globe.

After being exposed, Russia copped criticism from Japan, America, and some other countries who all pressured them to stop the dumping, to which they agreed.

In 1996, three years after this outrage against Russia, countries around the world came together at the London Dumping Convention to create the London Protocol. An agreement between 37 countries to ban the dumping at sea of radioactive and industrial waste.

Though this battle has been won, Greenpeace will continue to fight against the use of nuclear energy. Disasters like Chernobyl and Fukushima have demonstrated the dangers of nuclear power, while renewables are safe, clean, and provide sustainable opportunities for employment and the economy.

Thanks to supporters like you, we can continue to push our green energy campaigns like REenergise, to help make Australia a country sustained by renewables without any need for nuclear energy.