In the last few days I’ve learnt that I’m “scum”, “a bloody idiot”, “a bloody hypocrite of epic proportions” and even had an abusive comment in ape language translated for me.

People say you have to be thick-skinned as a campaigner but frankly this is pretty tame (and uncreative) compared to what I might cop from my pair of hilarious brothers on a weekend kayak or my exceedingly witty ladyfriend on a daily basis.

Today, the fine people over at Asia Pulp and Paper’s Australian arm, Solaris, have been exposed in an article by online news site mumbrella not only for a lack of wit and good manners. They’ve also demonstrated that they have a long, long way to go before taking the environmental consequences of their business seriously.

The notorious, destructive activities of Asia Pulp & Paper (APP) have been documented and exposed by Greenpeace and other NGOs time and again for years. The Guardian’s George Monbiot has said that APP ‘could make a fair claim to being one of the most destructive companies on the planet’. 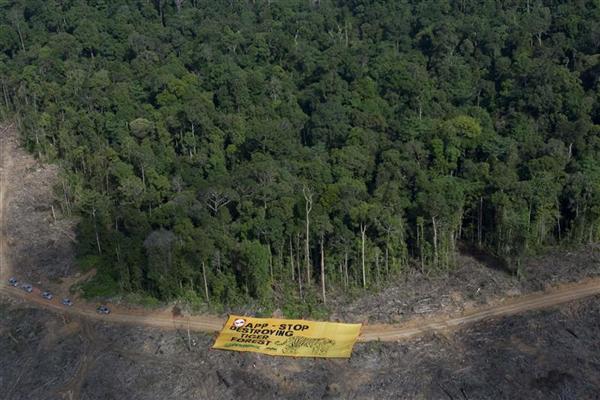 APP: How about you spend your time cleaning up your act, rather than your image?

For these reasons and because Indonesia’s rainforests can not take much more abuse from companies like APP, Greenpeace will continue to pressure companies not to support this company and trade in rainforest destruction.

Yet in response to another major contract cancellation, this time, IGA owners Metcash, Solaris responded immediately with public relations spin and misinformation and then backed it up with abusive comments under pseudonyms on an online news site. The ads would have cost tens if not hundreds of thousands of dollars.

APP publicly say they want to sit at the table with Greenpeace but before that, they need to show they are serious about cleaning up their act in Indonesia’s forests rather than just efforts to clean up their image.

P.S. Thanks for all the positive messages you send to Greenpeace – they far outweigh the negative!