Greenpeace India: The price of dissent

In less than a month, Greenpeace India is in danger of closing. 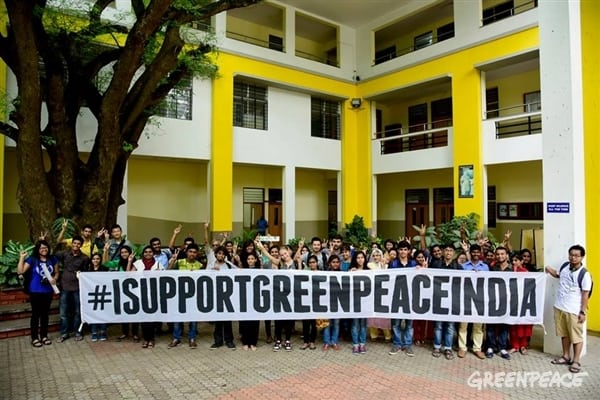 Over the last year, we have born the brunt of repeated attacks. In June 2014, all funds coming from Greenpeace’s international office were frozen. Then in January, my colleague Priya Pillai was due to fly to London to meet with British politicians but was prevented from leaving the country. In both cases, the Delhi high court has agreed with us that ministers have misused their authority.

But just a few weeks ago, the ministry froze most of our domestic bank accounts. As a result, we have no access to the donations made by over 75,000 Indian people who campaign with us for a cleaner environment. We have enough funds to keep paying staff and the rent on our offices for the next month – after that, Greenpeace India may be forced to shut down.

So why is the government going after us? Is it because for over a decade Greenpeace India has a solid track record working for a cleaner and healthier environment for all Indians? Surely that’s not something the government is against? Or is it because Greenpeace’s recent work on these fronts has antagonised powerful corporate interests – the same interests widely believed to have financed the government’s 2014 election campaign?

What has Greenpeace India achieved?

Here are just some of our recent achievements:

It’s clear that the government is closely linked to these corporate interests, so it’s no surprise that it is now trying to silence us. We will answer the charges against us, and take the fight to the courts, because this is about more than just the survival of Greenpeace India. By silencing criticism, the government is making full-frontal assault on our freedom of speech, and thousands of other Indian organisations are being targeted. As the Delhi High Court said, “You can’t muzzle dissent in a democracy.”

In the meantime, we are secure in the knowledge that nearly 70% of our funds come from ordinary Indians, spanning all classes, religions and artificial divides. We will continue to fight for the right of all Indians to clean air and water, safe food and a liveable and healthy environment. And most of all, for the right to speak up, to disagree with governments and corporations and tell them that they must put people and planet above profits.

Ashish Fernandes is a Climate Campaigner for Greenpeace India.