We brought the Great Barrier Reef to Canberra

We did it! We delivered our petition with 32,000 names to the new Environment Minister in a spectacular way at Parliament House.

We did it! We delivered our petition with 32,000 names to the new Environment Minister in a spectacular way at Parliament House. Our message for the minister, and the new government, was clear: Australians want real action on climate change to protect the Great Barrier Reef.

We arrived in Canberra on Tuesday evening and set up a huge coral garden of 300 coral-like cutouts on the front lawn of Parliament House, to bring home to our new leaders what’s at stake if we don’t act fast enough on climate change. The stunning visuals were picked up by media and have already reached hundreds of thousands of people around the country!

The coral was painted with UV paint so it glowed in the dark when illuminated by blacklight. It took hours to set up and weeks of hard work from dedicated volunteers to create the coral. And the result was spectacular. Here’s what it looked like: 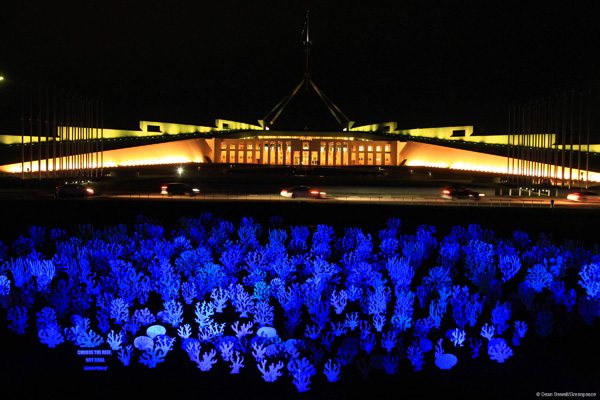 The Great Barrier Reef glowed in the dark on the lawn of Parliament House.

We returned to Parliament before sunrise yesterday to prepare the Reef before politicians arrived (some of the coral had been blown over by overnight wind and rain, which continued for much of the day). Wonderful Greenpeace supporters braved the rain to come out and unfurl a banner reading ‘Choose the Reef, not Coal’: 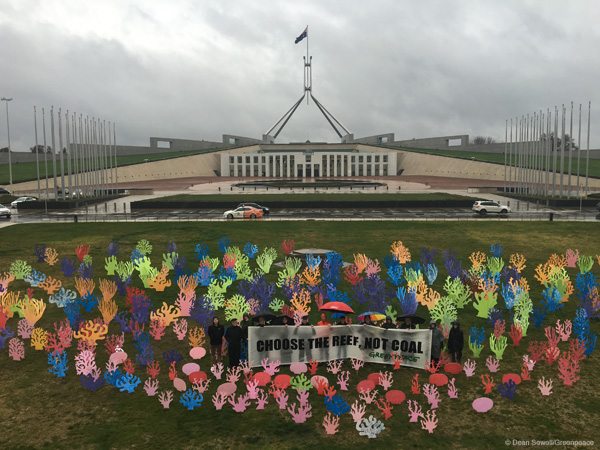 Incredible Greenpeace supporters braved the rain in Canberra to send a strong message to our leaders: choose the Reef, not coal.

We then went into Parliament House to meet with the new Minister for the Environment and Energy, Josh Frydenberg. We delivered our petition straight to the Minister and talked about the strong support for a coal free future for Australia and a healthy Great Barrier Reef. He heard our message. Now it’s time for action. 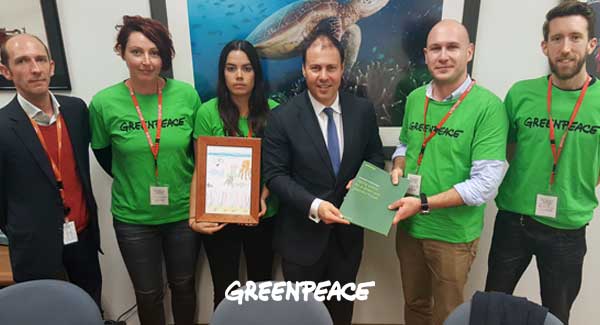 In their first week back in Canberra, tens of thousands of people helped make sure our new leaders know that Australians care about our Reef and demand real action on climate change – now. We’ll continue to keep the Reef a priority for this government. And thanks to everyone who spoke up, we’ve put the Reef on top of Minister Frydenberg’s agenda.