These incredible female environmental activists did not wait for change to happen - they stood forward, stepped up, and took a leap for the environment. Read these incredible stories of people power and share them with your friends and loved ones! 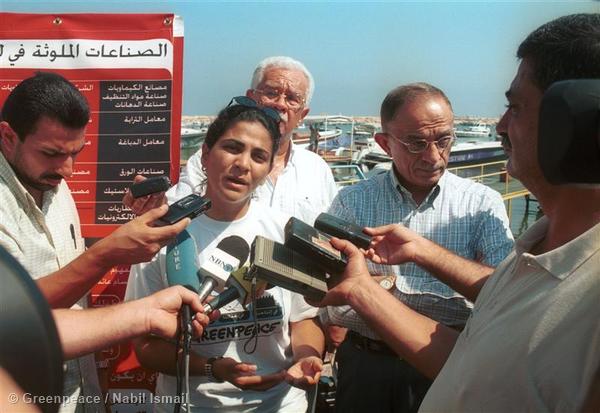 It was Zeina AlHajj’s first month on the job in 1999 when she and fellow activists encountered armed resistance, including shots fired, at a peaceful protest of the Lebanese Chemical Company in Selaata.

“You could tell the difference between the Lebanese activists from the Rainbow Warrior crew in the crowd by the direction they ran when shots were fired. Most, probably sensibly, ran away from the shots. But those of us who were Lebanese activists were so outraged that guns would be fired at unarmed, peaceful protestors, we ran toward them,” recalled AlHajj.

The group was on site of the Lebanon Chemical Company’s discharge pipe, which was pumping toxic waste and heavy metals directly into the Mediterranean Sea untreated, when the assault took place. Some were badly injured; one with a broken arm and another suffered a back injury. Journalists from the Lebanese Broadcasting Corporation and Middle East Television were also assaulted, and the video footage from the Associated Press was completely destroyed. 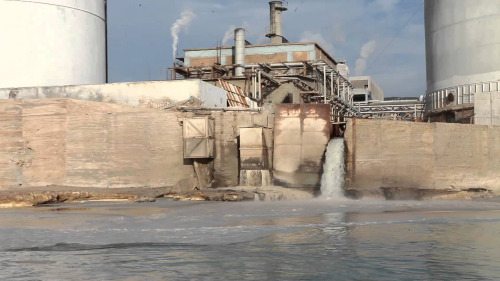 The Lebanese Chemical Company further retaliated by filing charges against the activists who arrested and taken to court. Eventually the charges were dropped and deemed unwarranted against a peaceful demonstration. Today Lebanon Chemical’s dumping is restricted by law and the vigilance of the local community, and Zeina Hajj now serves as the Executive Director of the Greenpeace Mediterranean office based  in Istanbul. 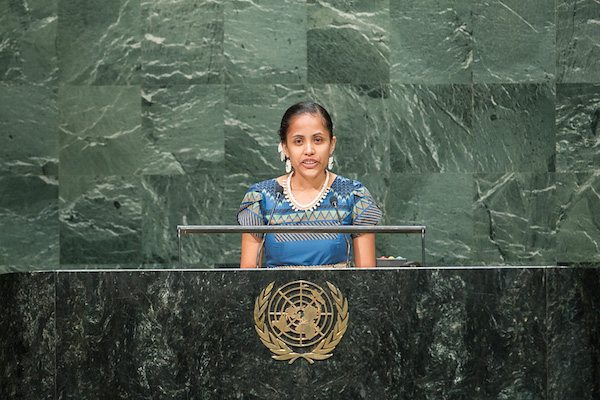 Kathy Jetnil-Kijiner was one of four speakers chosen to speak at the opening ceremony of the United Nations Climate Summit in 2014. A Marshallese poet, writer, performance artist, journalist and mother, she was given the chance to deliver her people’s message before Ban Ki Moon and other world leaders. Not only did she rise to the occasion, but she powerfully voiced a call for climate action that left UN delegates on their feet with tears in their eyes.

In an inspirational poem to her young daughter titled “Dear Matefele Peinam,” she captured the severe realities of the impact climate change has on people, especially Pacific Islanders, and inspired action to change the course.

“We are drawing the line here because baby we are going to fight,” she said and went on to detail all of the heroic acts within the environmental movement to fight climate change. Coming to a close, she adds “we deserve to do more than just survive we deserve to thrive.”

we are spreading the word

and there are thousands out on the street

marching with signs hand in hand

they’re marching for you, baby

they’re marching for us

because we deserve to do more than just

Jetnil-Kijiner’s brave words to world leaders at the beginning of the Summit set the tone for the days to follow.

Read more about Jetnil-Kijiner’s powerful work on her website. 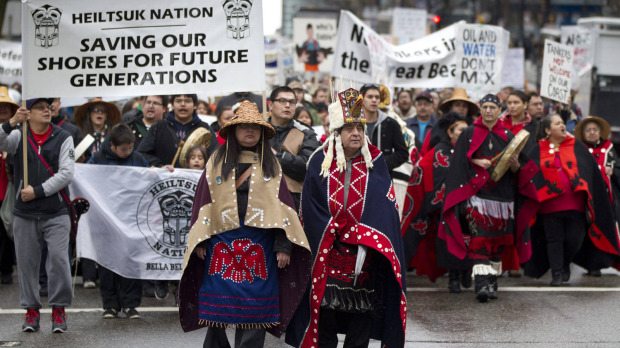 Marilyn Slett, Chief Councillor of the Heiltsuk First Nation, spent four straight days in the regional office of the Fisheries and Oceans Canada (DFO) negotiating with federal officials who planned to open commercial herring fishery on the central coast in April, 2015. Nearly 150 others were camped outside the office to support their efforts. While Heiltsuk members were preparing to go out on the water to block the herring fleet, DFO made a last minute decision to close waters and move forward discussing herring management with First Nations. 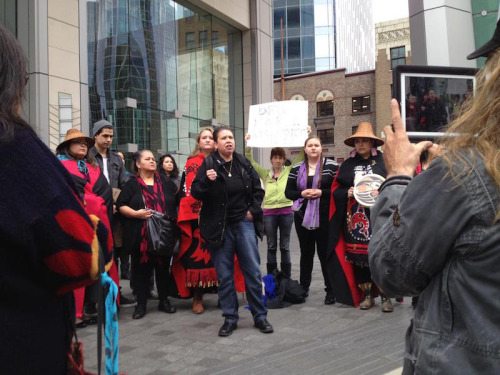 Prior to these successful efforts, Heiltsuk members hoped to stop the harvesting of herring during a limited opening that was called with little warning. But when they arrived, fisherman had already harvested approximately 700 tons of herring.

The commercial gillnet fleet were ready and waiting to begin fishing in the central coast when the DFO closed the waters to them. The First Nations argued that federal claims of the amount of fish were inaccurate and that stocks were actually much lower than assessed. But after a week of protests and negotiations, the fleet turned their ships around at the announcement of the closure. The courage and perseverance of Slett and the Heiltsuk First Nation paid off. 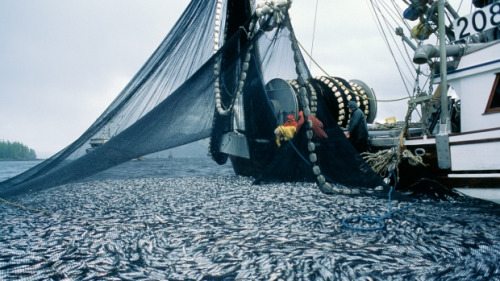 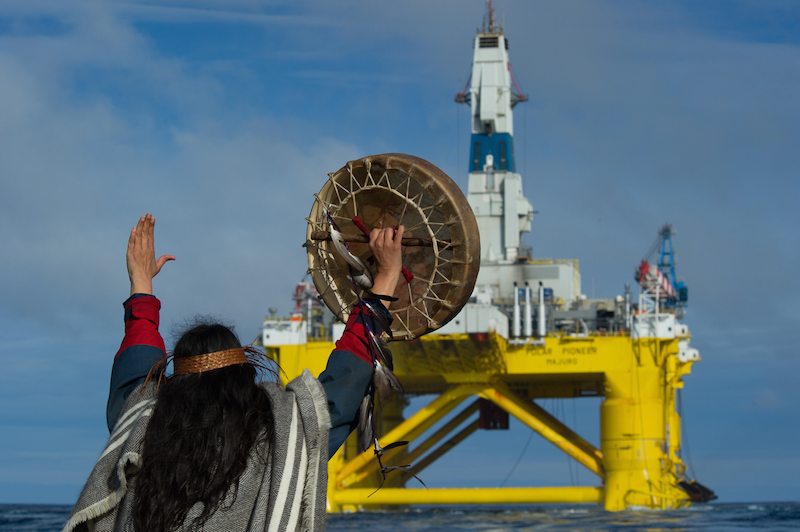 “This morning, I faced off with Shell’s Arctic Drilling Rig the ‘Polar Pioneer.’ It was terrifying. But there are moments in life when, despite your fear, you must act,” expressed First Nations artist and activist Audrey Siegl. Audrey shared this note on June 17, 2015, the day she confronted Shell’s massive Arctic drilling platform in waters off the west coast of Vancouver Island.

Siegl took to the waters that morning to protest Arctic drilling and stand against Shell in its efforts to begin exploratory drilling the following month. She stood strong on the inflatable boat as it approached the 300-foot-tall drill rig, signaling it to stop while fearless swimmers jumped into the waters to protest.

“As a First Nations woman, I no longer accept inhumane treatment and violations that have been forced on my people for centuries. I no longer accept the lies that have been served up as the truth for centuries. We have been duped into believing that we have no power and no say from corporations like Shell. The truth is that we do have power. We do have a say. We just cannot stand idly by and let the destruction continue,” writes Siegl in a reflection of her brave action.

Siegl has been travelling with Greenpeace’s Esperanza to connect indigenous communities along the coast of British Columbia. Prior to her courageous stance, Shell’s Arctic-bound Polar Pioneer was met with immense opposition when dozens of kayakers blocked the rig as it left the United States.

View more images of Audrey and others taking a stand against Shell’s drilling platform. 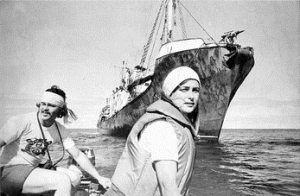 With her husband Robert Hunter by her side, she went on to inspire generations of activists in their first acts of courage, including her own daughter Emily.

Bobbi Hunter was attending to administrative duties in the 1970s when she stepped out from behind her desk to board a zodiac inflatable in the first anti-whaling campaign led by Greenpeace.

Way beyond her comfort zone but driven by passion, she boldly used her body to block a harpoonist from killing a whale – the first woman to ever do so.

You can read more inspirational stories about people standing up for our oceans, forests, animals and climate at Courage Works.